14:29 Szczesny's biggest vice: Cigarettes kicked him out of Arsenal, and now…

14:27 Catalan separatist politicians have been released from prison

14:09 The Israelis exposed to the delta strain will be quarantined

The cult music radio Kanal 103 turned 1 on May 30. Two years ago, the radio was disconnected from FM as illegal, continuing to operate online. Despite the promises from the authorities (MRT and the Government) that the problem will be solved, the return of the 103 frequency did not happen.

The music radio Kanal 103 appeared in parallel with the independence of our country at the right political moment, it was born in the conglomerate called MRTV, for the "hundred-year-olds" the right place for hatred, at a time when one-mindedness was shattered and sprouts of cultural pluralism appeared. From the very beginning, this non-commercial music frequency, until today, has confidently trained the musical view of many generations. He agilely and without hesitation took care of their mental hygiene, profiling a unique aesthetic music code and a recognizable program, which affirms the progressive sounds and ideas within the Macedonian cultural space. 103ka was and remains a catalyst and service of aesthetic and intellectual needs, a generator of ideas and a set of cultural potential.

Two years ago, the radio was disconnected from FM as illegal, continuing to operate exclusively online. Despite all the promises from the authorities that the problem will be solved soon, the return of the 103 frequency did not happen. 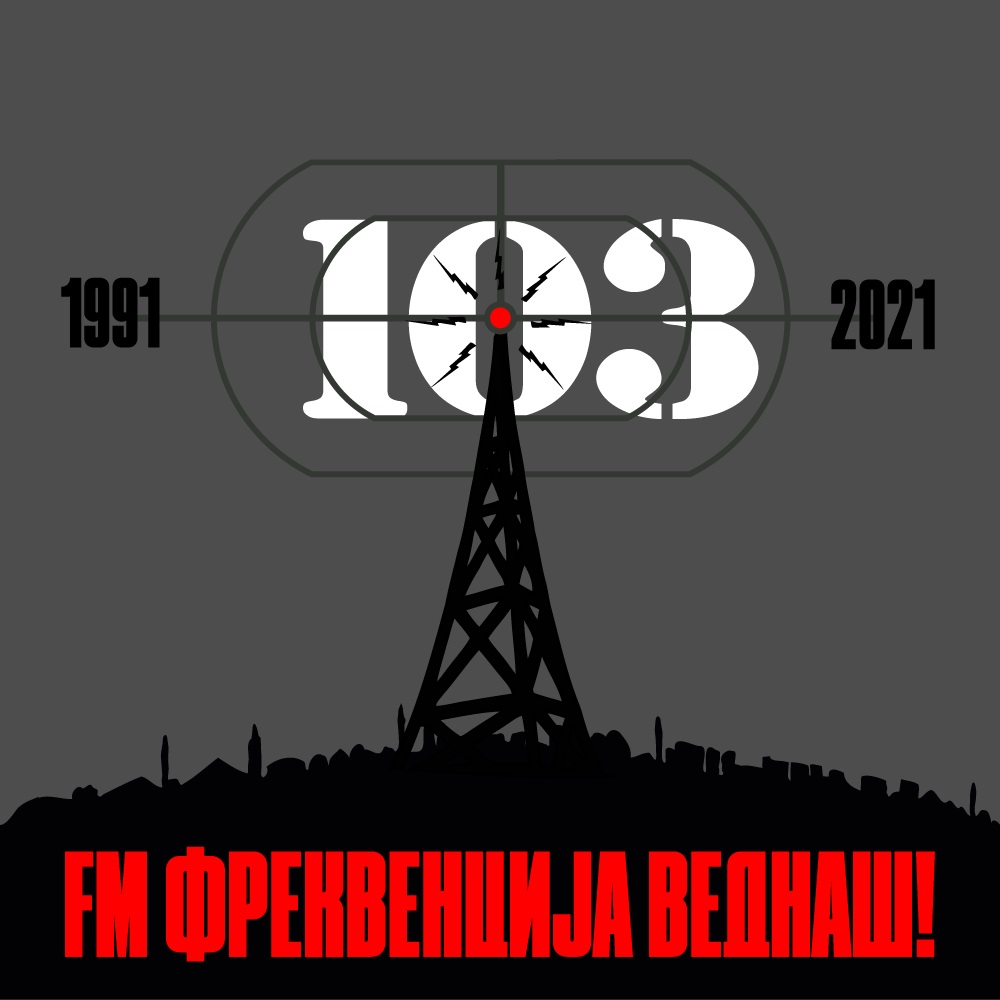 On the day that marked the 30th anniversary of Channel 103, the team decided to shut up loudly. They turned off the radio streaming and broadcast 24 hours of silence in protest against, as they say, the stupidity, cultural illiteracy, deafness and ignorance of those who are called and responsible to maintain and nurture the proven cultural and media values ​​in the country. .

In conditions of endless transition, brutal corruption, complete degradation of all social values ​​and terrible partisanship of the media, Kanal 103 remained an untouched oasis of independence, integrity and incorruptibility, as well as a true home of Macedonian alternative music and the scene in general. And all this is the result of the pure love, sincerity and enthusiasm of the people who created the program, for three decades now, without any financial compensation.

With its unconventional, bold and uncompromising approach, the radio soon gained a specific media position, huge popularity and cult following, as well as a well-deserved status of "spark of light in the dark labyrinths of MRT".

On the occasion of 20 years of existence of the radio, the journalist and musicologist, Tina Ivanova, today director of the Macedonian Philharmonic, wrote the book "Document 103" and won the state award "Mito Hadzivasilev Jasmin", for which she is especially proud.

- Stotrojka, in a way, was born in my home. Half of my family was part of the formation of this special media being and all the events related to it were up to me. Hundreds of me grew up, formed my artistic character, gave me a focus on the culture of living. I would like to continue to breathe with the breath of the new generation, so that today's "kids" have a different vision from the one offered by the mass media - says Ivanova.

The musician and independent publisher, David Angelevski, who was a longtime music collaborator on this frequency, believes that Stotrojka is a cultural symbol of Skopje, a value gained in the air, which hangs over the city and preserves it.

- A kind of alternative academy for things that are not taught in school or on television and through which many young people have passed, who today, unfortunately, have largely emigrated abroad, due to the failure of the Macedonian experiment. But what it means and radiates even more after 30 years is that it is a harbinger of political change at the national level. For four months it has been more independent of the independence of the state and is one of the first truly free media, a voice of modern and progressive thought expressed through music and the whole culture around it. Moreover, it is unbelievable that today, the country that considers itself democratic, leaves the radio without a resolved status, without FM frequency and in technically miserable working conditions. With all its weaknesses, Stotrojka must get a chance to survive and a vision that would adapt to the new media and cultural reality in the 21st century on the existing premises of authentic freedom and independence. Given the rapid global change over the last 30 years, that adaptation was and still is the biggest challenge for the team working there. But I am sure that the coming time will show the necessity of the existence of Kanal 103 as a high public interest. If the course of this country remains at least a minimum of democracy, of course - said Angelevski.

It is followed by Angela Jovkovska, music collaborator and author of one of the oldest shows on Kanal 103, "Modus Vivendi". According to her, the radio has been a vital part of the Macedonian independent music and cultural scene for 30 years. A platform through which you can freely communicate with people who are on the same frequency.

- Stotrojka is still the only uncorrupted, uncompromised, free medium. An important segment in creating some new concepts, cultural identities, recognizing and establishing certain values, as well as the way of thinking and living of generations of progressive individuals. As a longtime and loyal supporter of the Macedonian independent music and cultural scene in general, the radio has made a great impact and is of great importance for it. Stotrojka fully deserves the status of a cult radio which is synonymous with music revolution, urban culture, free but engaged spirit and subversiveness. It is a counterpoint to the establishment and the mainstream. I hope it will be a constant in the ocean of ephemeral values ​​for a long time to come. Therefore, FM frequency immediately! - insists Jovkovska.

Gere: It's time to move on

Grubi: We did everything, it is the EU's turn

Andov for Free Press: Changing the anthem is pre-election marketing, and it is not a priority

VIDEO | Stojmanovski: With the money from the placement in the European Championship, FFM to help the clubs

VIDEO | Andonovic: Were the Saudis who killed Kashoggi trained in the United States in an action supported by the State Department?

Szczesny's biggest vice: Cigarettes kicked him out of Arsenal, and now he's on fire ...

Catalan separatist politicians have been released from prison

The Israelis exposed to the delta strain will be quarantined

Zaev: Europe has a problem with itself, the Balkans demonstrate European values

Suarez does not intend to return to the Premier League, the reason is Liverpool

Emilian Salievski: I want to convey a positive message on various topics through the songs

General Walters: The Contribution of S. Macedonia in NATO is vital ...

VIDEO | Stojmanovski: With the money from the placement at the European Championship, FFM to ...

VIDEO | Andonovic: The Saudis who killed Kashogi were trained in the United States ...

With the lowest price we can not give the highest salary

There are no negotiations for Macedonia, and besides that for Albania?