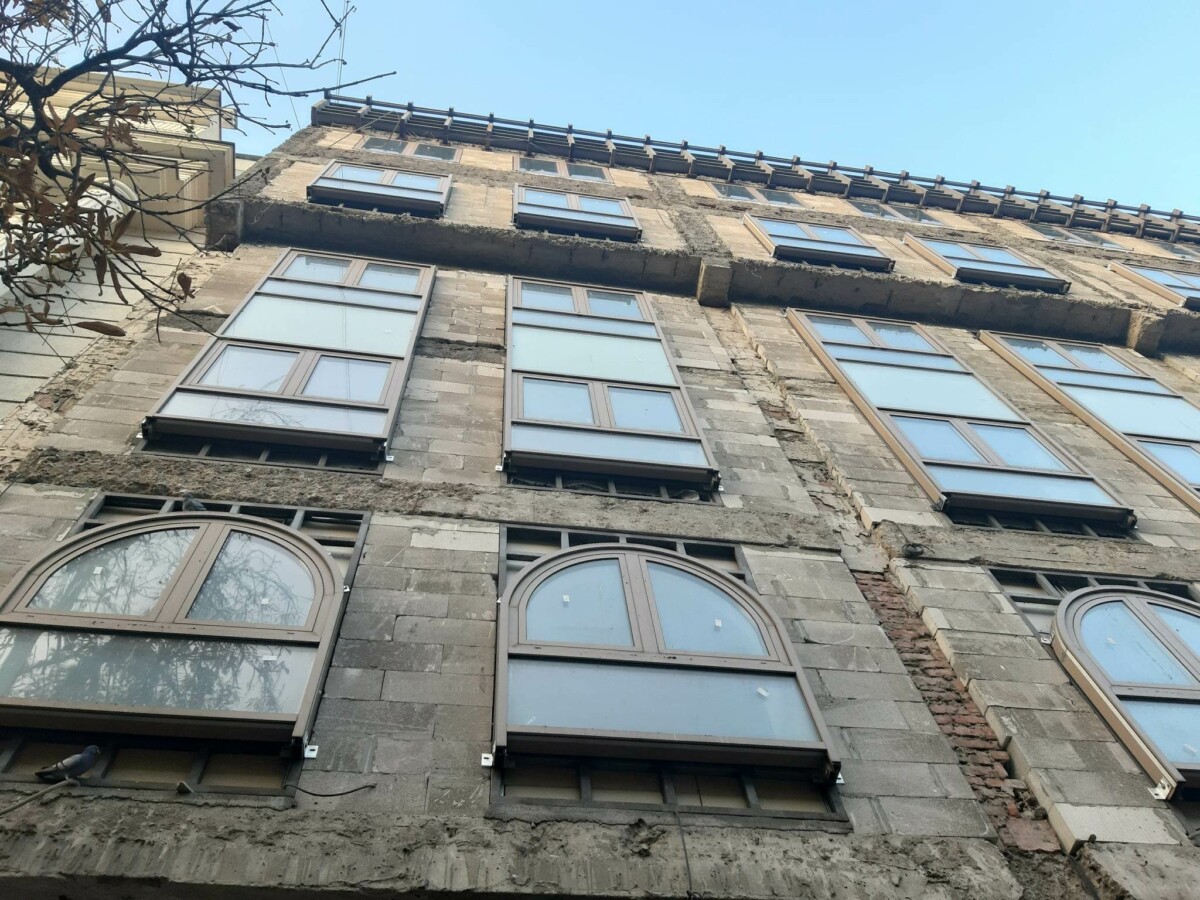 The building of "Pelagonija" in the strictest center of Skopje, one of those that were supposed to receive a baroque facade within the framework of the famous project "Skopje 2014" she has been standing naked for years. For the new facade, approx 2 million euros, but also after the ex-mayor Petre Shilegov did not sign such an agreement and stopped the baroque "dressing up" of the building, since then until today this building has not received any facade - neither expensive nor cheap.

In the meantime, the scaffolding was removed from it, there is no protection of the started and unfinished facade, only the windows extend outwards and thus, left to all weather conditions, it becomes seriously unsafe for the citizens who pass under it. Considering the fact that it is located in a very busy location, passers-by are not few in number.

These days, a citizen contacted our editorial office, who, while passing under the building, a piece of the facade fell at his feet.

It's a shame what's happening, I almost got hurt or the woman with the child who was coming in front of me, because a piece of the building literally fell between us. So if they don't do it anymore or don't know what to do with it, at least let them put a protective net or fence before someone gets hurt. It is surprising how much nobody cares about anything, least of all about the safety of the citizens. As far as I know, the facade is under the jurisdiction of the City of Skopje. Do they ever plan to finish it or are they waiting for a bystander to get hurt? – our compatriot recounts indignantly.

Unfortunately from The City of Skopje, do not answer the repeatedly asked question from Free Press - does the City of Skopje intend to undertake anything and when in connection with the completion of the facade of the "Pelagonija" building. For a year, the new city management has not announced at all what plans it has and what it will do with the unfinished facade.

The last information dates back to Shilegov's time, when he explained that for more than a year correspondence has been carried out with the owner of the building. "Dr. Panovski" because according to the contract with the City, the company had to propose a member of the commission that will announce a competition for an idea solution. After that, nothing more was either announced or taken, as if everyone had forgotten about this object.

The renovation of the facade of the "Pelagonia" building began in 2015 years, when the then mayor Koce Trajanovski concluded an agreement with "LSG Building Solutions" from Skopje, a company which, as they informed, delivered the lowest price in competition with six companies.

The idea of ​​changing the facades of modern buildings to baroque ones dates back to the beginning of the implementation of the "Skopje 2014" project, but no one responded to the first tender for the selection of a conceptual solution for this building in 2011. At the second competition, conducted the same year, the conceptual solution of Lazar Dimov and Nikola Stakinov won first prize. In 2014, the company that owns the "Dr. Panovski" building got involved in the reconstruction of this facade, but so far nothing has been realized.

The Program Collegium of MCC to Arsovska: Any publication of information while the audit is ongoing is illegal and general

Tekball will be played in elementary schools in the Airport

Arsovska was left without new buses, the council did not give permission to buy them with a bank loan

Gjorgjievski only officially communicates with Arsovska: I have no obstructions from her this year

Jancheva: Buying new buses does not solve the problem of public transport while the BRT project is in the "drawer"