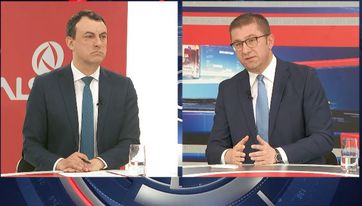 The President of VMRO-DPMNE, Hristijan Mickoski, in tonight's guest appearance on the show "360 degrees" on Alsat TV said that he still stands on the position that this Government can not do anything better than the previous one.

Mickoski says that he can sit aside and continue to criticize the government, but according to him that is not a solution, and that is why early parliamentary elections are needed.

"We can sit on the sidelines doing what we do, criticizing what does not cost us, having a comfortable position and simply seeing how things are going. I am strongly convinced that this capacity of people, both personal and programmatic, can not do anything better than, in my opinion, the weakest government in the past 30 years in Macedonia, and that is the previous government. Maybe you will agree, maybe not, maybe some of the viewers will agree, some will not agree, but that is my opinion. And now if I am convinced, I am not saying that I am 100% right, but at the same time do we have that time, and that comfort to give an additional three months, to give an additional four, six months, do we have that right, as politicians "because we go before the citizens and declare that we are responsible, and that as people we want to do something for this our country," said Mickoski.

He also announced that an internal reorganization of VMRO-DPMNE is planned, which will include increasing the number of vice presidents of the party.

- On Monday we will have a session of the Central Committee, at which new members and members of the Executive Committee will vote. We will have an expansion, but also a rejuvenation of the party. There will be 28, 29 members, and the number of party vice presidents will also increase from two to four. I think that these people and composition will have a serious state capacity, said Mickoski in the guest appearance on the show "360".