Mickoski: We don't need Europe if we need to assimilate 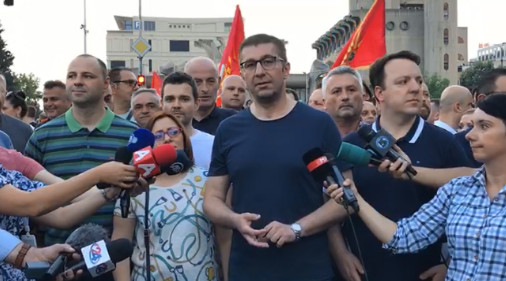 The leader of the VMRO-DPMNE opposition, Hristijan Mickoski, before the start of the national protest "Ultimate - No thanks" on the plateau in front of the Government, said that if necessary "we will wait for better times and better people to enter the European Union with dignity".

"If Europe is not ready to receive us, the civilized Macedonians, in a civilized and dignified way where we belong, and that is in Europe, we will wait for the arrival of people who understand what we want to say today. ", says Mickoski.

According to Mickoski, "the proposal is an ultimatum and a Bulgarian dictate for megalomaniacal demands and historical aspirations towards Macedonia".

"Today, Macedonia is waking up and all those who want to put an end to Macedonia with a signature in a day or two from today, the Macedonian people will not forget this," says Mickoski.

There is no politics here, there is only one party here, that is Macedonia, and here are people from all political parties, but also those who are undecided, and who, for the past day and night, have put up a lot of resistance on social media publicly, but also in the company of his associates, he added.

VIDEO: Protest in front of the Government against the French proposal