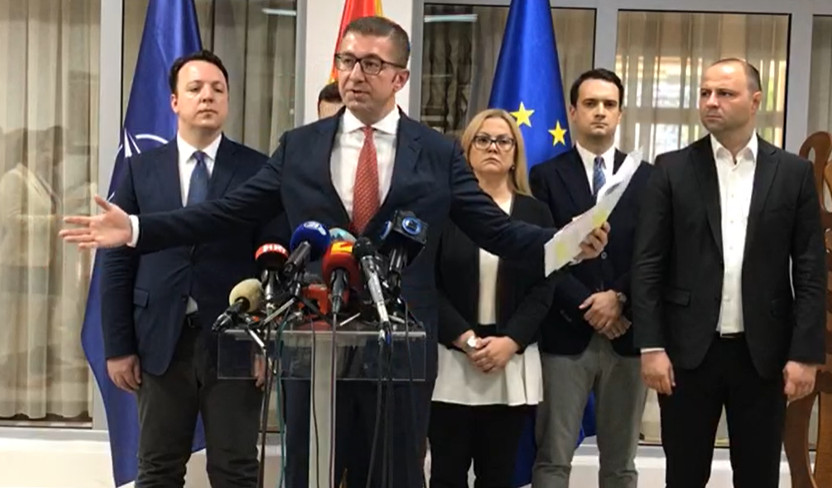 VMRO-DPMNE leader Hristijan Mickoski after the meeting with Prime Minister and leader of SDSM Dimitar Kovacevski summarized their conversation and emphasized that he will request the deletion of four articles from the French proposal to prevent the Bulgarianization of Macedonia.

- I suggested to him to delete Article 11 and Article 14 of the Protocol, and then in the negotiation framework where we have principles on which the negotiations are conducted, to delete the articles where the annual reviews are and the section where they refer to the protocol of the first intergovernmental conference. Let them be deleted if this ensures a European future, Let them remove these four points. Let the Copenhagen criteria remain as for all countries, Mickoski said and added that he emphasized to Kovacevski that these two documents are not acceptable for him and for VMRO-DPMNE, and offered him to come out and reject the proposal, and he would withdraw the request for early elections.

Regarding the government's claim that the Macedonian language has remained pure and that the footnote from the Bulgarian side does not threaten the language and identity, Mickoski said:

He emphasized that he stands by the proposals he gave to Kovacevski today:

- I made a proposal to take a step back and stand in defense of the Macedonian identity. I call all the Macedonians, the Albanians, the Turks, the Serbs, the Roma. There is no need to cause tension. Only corrupt politicians do that, Mickoski said.