Vuќi's mega interview: I will jump into the pool in a suit if we get that investment! 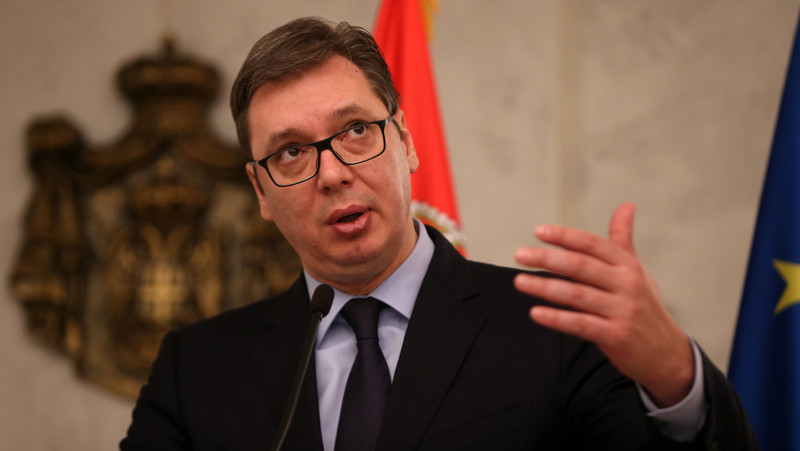 The President of Serbia, Aleksandar Vuќi., Said that his new presidential term must start by May 31 and that he is considering the composition of the new government, but also the prime minister-designate, said the MIA correspondent from Belgrade.

"I hoped to take the oath before the new assembly, but it could be before the old one, but my term must be announced on May 31," Vucic told Prva TV.

Asked about the composition of the new government and the future prime minister, he said he was considering more people.

"I am thinking of three, four… Not really, it is much more important to me that these are people who will fight for the interest of the state, and not be guided by their own interests," Vucic said.

Regarding the majority in the assembly of the Serbian Progressive Party (SNS) and the Socialist Party of Serbia (SPS), he said that "it is certain, but that there can be a larger majority, which is a matter of time."

Regarding the formation of a city government in Belgrade, Vuќi пора said that "he will call new elections for Belgrade when the opposition wants it, they just need to think carefully, because they will lose more convincingly".

Vuќi изјави said that Serbia suffers a lot because of the non-imposition of sanctions on Russia and that life would be ten times better if it did, but that it will not, because it pursues an independent policy.

- Everyone will say that Vuќi наја announces the introduction of sanctions. No, we will fight as long as we can maintain our policy and we pursue that policy not because we have something of not imposing sanctions. Since I'll hear experts say that it's because of the billion-dollar price of gas, and we're losing billions on this, not to mention the smaller direct investment coming in, and that seven American producers and actors have refused to come and make films because we did not introduce sanctions against Russia, Vucic said.

He reiterated that Serbia knows how unjust sanctions are and that Serbia does all this out of respect for rights, but also said that the people should know that the country is losing a lot because it does not impose sanctions on Russia.

I'll jump into the pool in a suit if we get that investment!

- The news arrives in June! There are two more countries at play, and if that happens, I'm ready! "I will jump into the pool in a suit if we get that investment!" The Serbian president said with a laugh, but at no point did he reveal exactly what it was about, but stressed that it was a big deal and a big investment, incredible for Serbia.

Namely, he explained that in the second half of June the decision of a major world car manufacturer whether to invest in Serbia will be known and promised that he will gladly jump into the Tashmajdan pool if the decision is positive.

"I promise I will jump into the Tashmajdan pool in a suit if we get that news in June. "That news is so important and after that - I have done my job for Serbia," Vucic said. If that happens, I as Savic (Dejan, the coach and selector of the water polo national team), I am just fatter than him, I will jump into the pool in a suit, because I think it would be the biggest victory for Serbia, if we succeed. Two more countries are in the game and I think we are better than them in everything except one thing. "And you know what that one is - I talk about that in the whole show," Vucic said on the show.