Maricic: The talks in Sofia continue, the Macedonian language and identity are protected 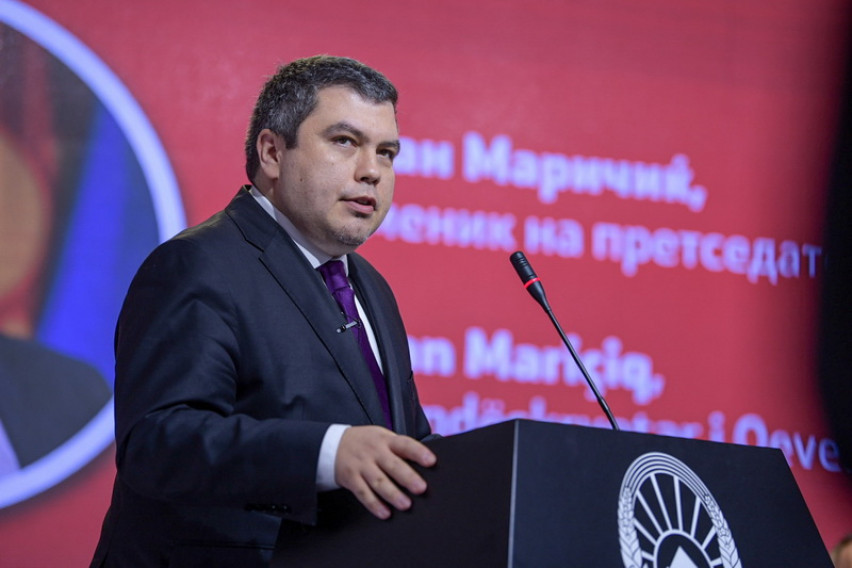 In the talks in Sofia today, as far as I know, there are no meetings, but the contacts continue constantly. During this entire process, especially in these six months, we have had daily contacts at different levels, stated the Vice Prime Minister for European Affairs Bojan Maricic at today's pre-conference in the Government.

- Completion of this proposal or all its documents has been done through the Ministry of Foreign Affairs and I think that they are in constant communication with their colleagues from Sofia. But that there was some kind of process today in Sofia, I don't have such information, said Maricic, answering a journalist's question whether there were any negotiations in Sofia today regarding the French proposal.

Regarding Bulgaria's one-sided diplomatic note or statement, the Vice Prime Minister emphasizes that he cannot know what the wording will be, because, as he said, it is Bulgaria's right, but whatever is written there, we will of course respond to it.

- With the Prespa Agreement that we signed with Greece in 2018, we ratified it in our Assembly, we clearly defined our language as Macedonian. On the basis of that agreement, because that process was conducted under the auspices and mediation of the United Nations, on the basis of that agreement we entered the Macedonian language as our language in the United Nations in our UN identity card. It had implications in all international organizations, including the OSCE, NATO, everywhere we are a member, Maricic stated.

All of us Macedonians and all citizens should understand that in this process our battle was not to convince Bulgaria to change its position. In this negotiation process, he pointed out, we aimed for the European Union to position itself towards our language and identity in principle as it is positioned towards all other member states.

The citizens of North Macedonia, said Maricic, should be sure that our language and identity is protected and there are no conditions under which we could accept anything else, and we have been saying that since the beginning of the talks.

- Starting this process under these conditions will allow us to advance our position and start the process of opening a door that was closed to us for 17 years and finalizing this process with our membership in the European Union precisely as Macedonians who speak the Macedonian language. he said.

- I expect that during the day those three documents that we published at the end of last week will be published in the Macedonian language because we already have the translation so that the citizens who have not seen it before or cannot see it in English can look in the Macedonian language to make sure of the theses that we are promoting all these days, the vice prime minister pointed out.

Regarding the whole package, he pointed out, he would not single out what we have given in return for the Macedonian language, but, as he said, it was important to us that all those positions that we advocated should be on the negotiation framework in a way that would guarantees clean wording, all other questions.

- We are aware that all agreements or compromises we have made so far are compromises in which we consciously participated, but which bring us positive things and some bring us obligations that we have to fulfill. But in the end, the main goal is to open the negotiations, so that we can start the negotiations in 17 years, to be at the table where we can influence, of course as many things as possible depend on us and from that process we do not give up anything in what we do not think should be conceded. This proposal guarantees that to us, and I think that no one has any grounds for any fear, because we discussed and presented it responsibly, Vice Prime Minister Maricic pointed out.