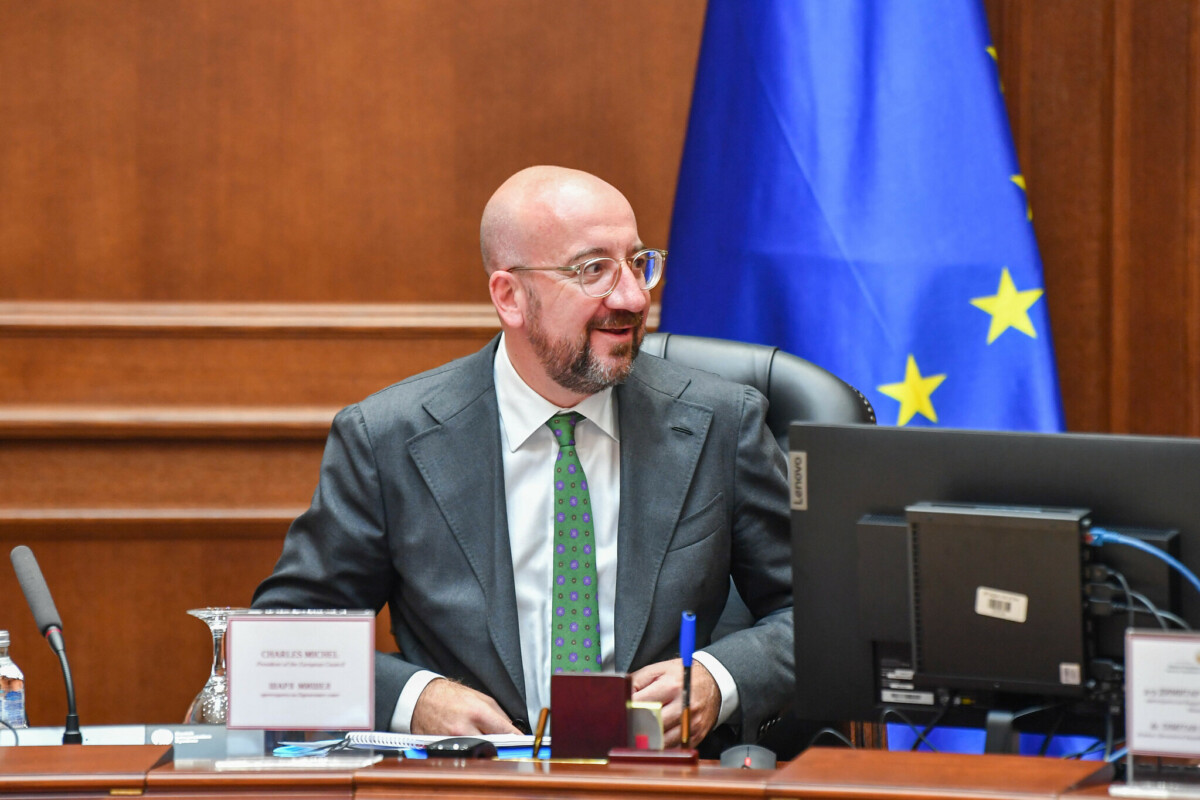 Your future is with us and together we are at the beginning of the breakthrough. Now we are implementing the decision from March 2020 when we decided to start negotiations with North Macedonia and Albania - said the President of the European Council at a press conference in Skopje.

In the next hours or days you can make the essential decision about your future and by accepting the European proposal, immediately start the accession negotiations for membership in the European Union, said yesterday the President of the European Council Charles Michel at the joint press conference with Prime Minister Dimitar Kovachevski. He emphasized that his one-day visit is at a crucial moment for Macedonia, but also for the EU itself, which, as he said, will be more prosperous and safer with the integration of the Western Balkans.

Michel came to Skopje at a time when the citizens have been protesting in large numbers in front of the Government for days and are opposed to the European proposal, and the top of the state is holding wide consultations and is of the opinion that the proposal is acceptable because it contains all the essential remarks for which it was previously rejected.

Michel emphasized that during the meeting in Brussels between the leaders of the 27 EU member states and the countries of the Western Balkans, in a sincere and difficult conversation, they were inspired to make important decisions for the future, to revive and speed up the enlargement process.

– Your future is with us and together we are at the beginning of the breakthrough. We are now implementing the decision from March 2020 when we decided to start negotiations with North Macedonia and Albania. Last week, the Council put together a compromise solution, which addresses your concerns, in order to start negotiations. If you say yes, the first intergovernmental conference will take place in the coming days. The next steps will be immediate, there will be a screening process, it is a bilateral screening with negotiating teams that will be called in Brussels. You are an example of how multi-ethnic countries progress, if you change the Constitution, it will open the next intergovernmental conference and we will automatically start negotiations. To be honest, this opportunity is too important to miss. Macedonians, you have a historic opportunity to say yes to negotiations with the EU, to count on our political and financial support, but also on our respect and loyalty. Only together we can face the challenges and only together we can overcome them - said Michel.

He added that the EU legislation will be translated into the Macedonian language. He said that he is aware that there are concerns about the Macedonian identity, but he emphasized that he personally, as president of the EU, will stand behind the rights of the Macedonians.

Prime Minister Dimitar Kovacevski reiterated the Government's position that a consultation process is underway in society. He announced that the bilateral protocol to be signed by Skopje and Sofia will be presented quickly, but emphasized that this protocol is not related to the European proposal.

– The protocol is not noted in the framework, it is a bilateral document that is not part of the European package. The frame and the protocol are different processes that happen to coincide in time. When the consultations are over, all documents will be sent to the Parliament, where representatives of all parties are represented and they will have meetings there, discuss the European proposal and reach conclusions. Based on those conclusions, the Government will make the decision. I believe that President Michel was clear that we have a proposal that allows us to start negotiations immediately. It is up to the Parliament to decide whether North Macedonia will or will not start negotiations for membership with the EU - Kovacevski said.

He appealed not to wait, to use the opportunity and for Macedonia to accept the decision.

Earlier, President Stevo Pendarovski also met with the senior European official. The cabinet announced that the two presidents agreed that accepting the French proposal would enable the opening of the first phase of the accession negotiations, which would effectively unblock the EU integration of our country.

"In addition to this, the opening of the first phase will represent a further incentive for the progress and prosperity of North Macedonia, but it will also have a positive impact on the overall situation in the Western Balkans. The interlocutors exchanged opinions in the context of the citizens' concerns regarding identity issues, for which President Pendarovski emphasized that the Macedonian language and identity must be respected and guaranteed by the EU," the head of state's office announced.

Michel was welcomed at the Skopje airport by Deputy Prime Minister Artan Grubi, who said that the visit of the President of the European Council is of great importance because it confirms the support and commitment of the Union for unblocking the integration path of Macedonia, ensuring the content of the correctness and rationality of the French proposal. about the dispute with Bulgaria.

- This support should be an additional motive to think and make the right decision about the European future of the country - said Grubi.

Before Michel's visit, the day before yesterday, the European Commission sent a message that a solution should be found as soon as possible. EC spokeswoman Ana Pisonero stated that the Commission is following the developments and consultations in North Macedonia and expects an effective response.

- We are carefully and closely following the events in North Macedonia. Now is the time for responsible decisions that will allow the process to move forward. For us, now is the time to move forward in the negotiation process. The revised French proposal enables exactly that - said Pisonero, reported MIA.