12:48 Andov for Free Press: Changing the anthem is pre-election marketing, and…

12:42 Pendarovski-Mimi Kodeli: Macedonia and Albania deserve to start negotiations with…

12:37 Gere: We all want to open negotiations as soon as possible, but…

12:34 Dimitrov: The blockade of Northern Macedonia is also a problem of the EU

Maja Velkova, the beautiful face of the city: Maybe I was the only woman with special needs who managed a salon

Motivational speakers are often people to whom life has not been very merciful. Our interlocutor today is not a motivational speaker, but through personal example, the way she lives, the smile that is always present on her cheerful face, and how it has a motivating effect. Because, despite her diagnosis, Maja Velkova is only moving forward.

She was born as a healthy baby, without any problems. At the age of three and a half, Maya's health began to change. Her illness was not detected in time so that it could be prevented and treated. It was too late after the diagnosis was already made - juvenile rheumatoid arthritis, because the disease affected all the joints, which began to twist and stiffen, and she was only six and a half years old, and Maya could not walk. 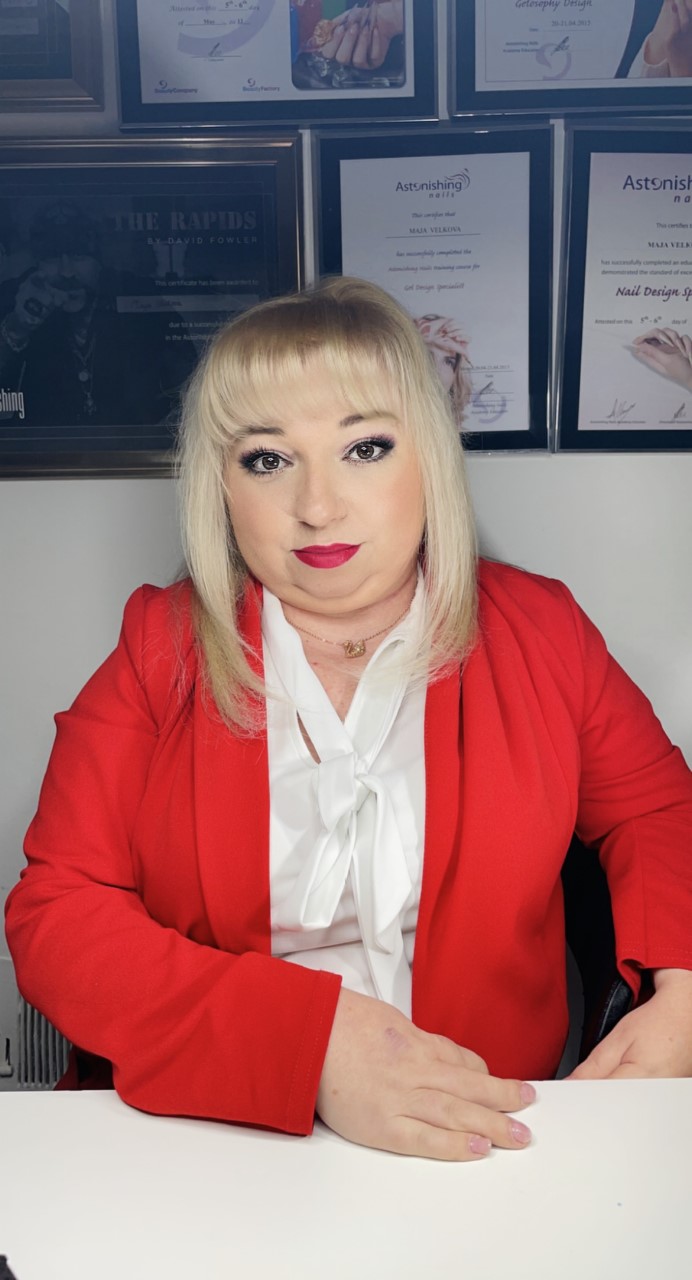 - My childhood was different, unlike all the children in the school, but they never neglected me, they helped me, they loved me like everyone in the class and when I had an operation they brought home notebooks with the material they learned that day, so that I would not miss the material. I can not complain either to my class or to my generation. My mother was the one who was with me all the time everywhere, even on every excursion and trip. At the age of 11, I was operated on, and shortly thereafter, I started walking on crutches again. There were other surgeries, but fortunately, I was independent again. I could go to school alone, go out with my high school friends, who also accepted me normally and took great care of me, especially my friend Bojan, who carried my backpack from classroom to classroom for four years, Maja Velkova recalls. 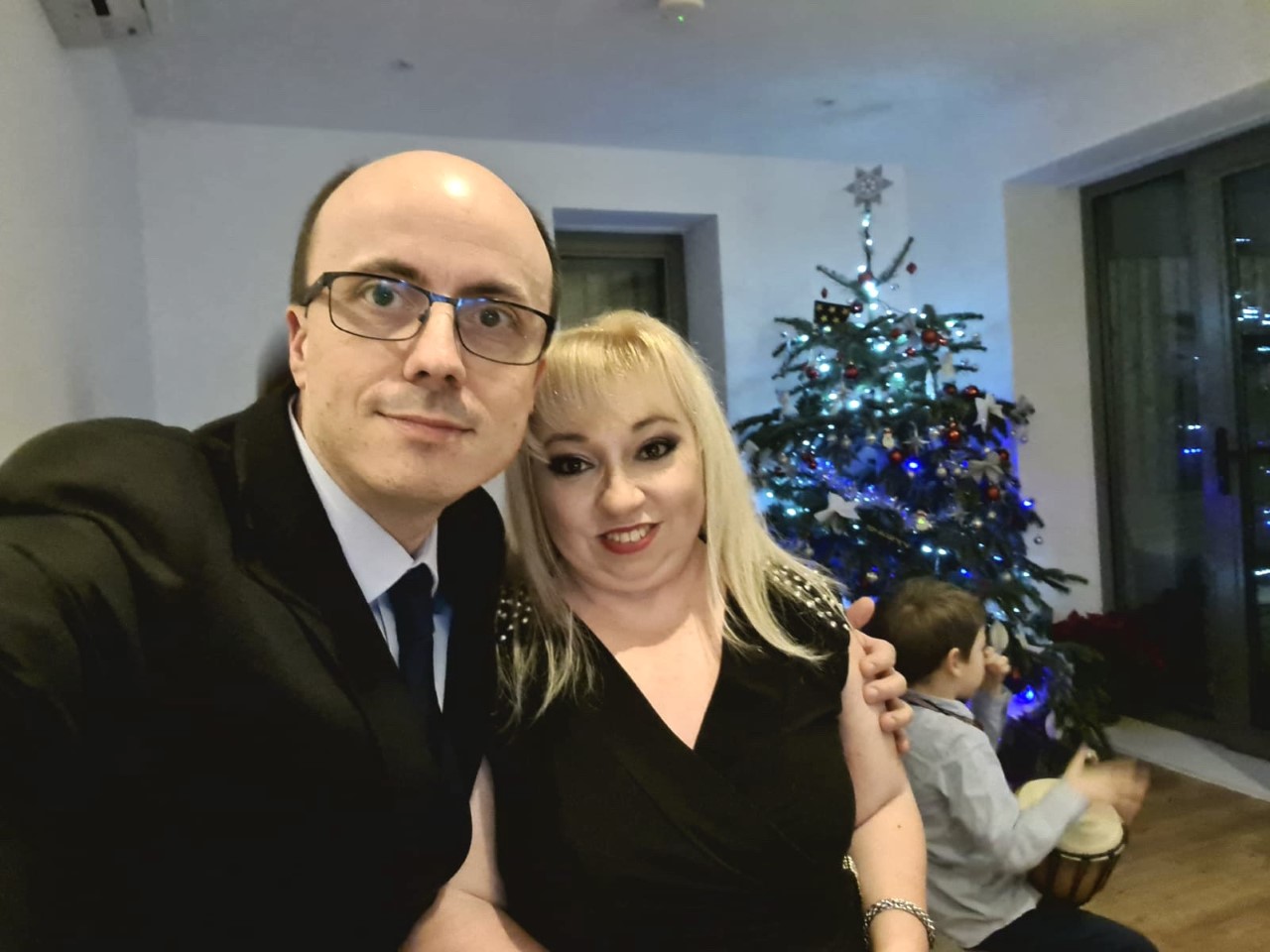 At the age of 18, she met her husband Boban, with whom they have been together for almost 20 years, whom Maja says is her life partner, her happiness and her greatest support. They crowned their love with their two children, Maria (16 years old) and Stefan (6 years old). Maja tells about the pregnancy:

- When I got pregnant everything was fine, although one of the doctors asked me to have an abortion, because she assumed that the baby would be born with anomalies, due to my illness, which was not proven. We did not believe in that, and we decided to continue with the pregnancy. And so, my first happiness was born, a healthy normal baby. Two years after I gave birth, I started to have pain, difficulty and fatigue in walking, so I had to have surgery. I had an artificial hip implanted, another one the next year, and a short time later I had to have surgery on my knee to get rid of the pain. Although it was a difficult period, well done. I did not plan another child until one day my daughter asked me to have a brother or sister so that she would not be alone. He said to me: "Mom, you just gave birth to me, and I will bring you food in bed and just lie down not to bother, I will do everything", he was only nine years old. I can not describe that feeling. And so Stefan was born, her brother, whom she loves the most. The pregnancy went well, and I gave birth to both of them by royal order. 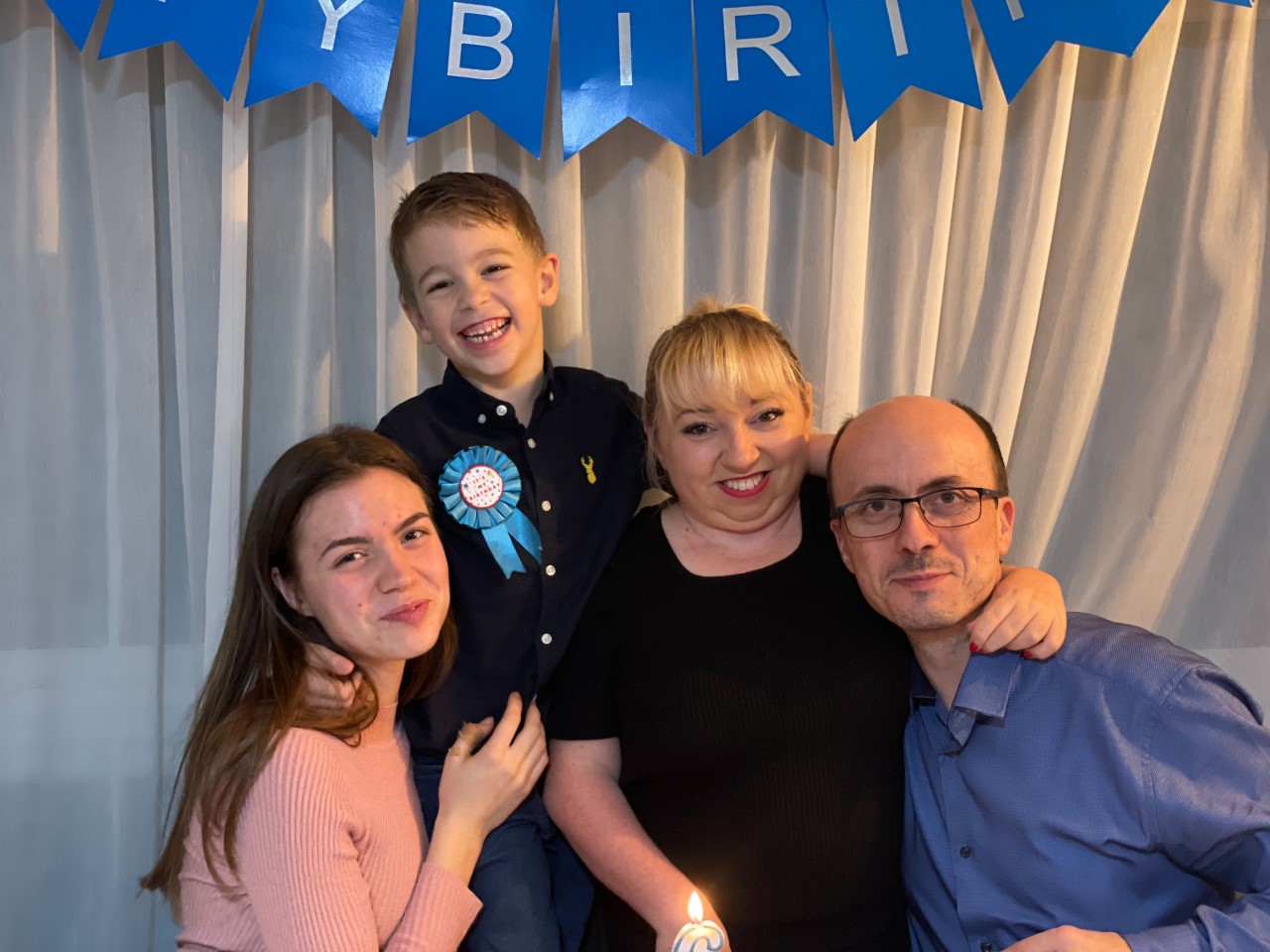 In raising the baby, Maja had the greatest support from her husband, getting up at night, bathing, then taking her to kindergarten, then to school and all other activities after class. Her parents, especially Maya's mother, visited them every day.

- It is not enough to say thank you. There was also my sister Ivana, who worked with me, she helped me every day during the working day, she took my daughter back from kindergarten / school. Not to be ungrateful, I will mention my employees, who also helped and together with them we were like a small family -  says Maya. 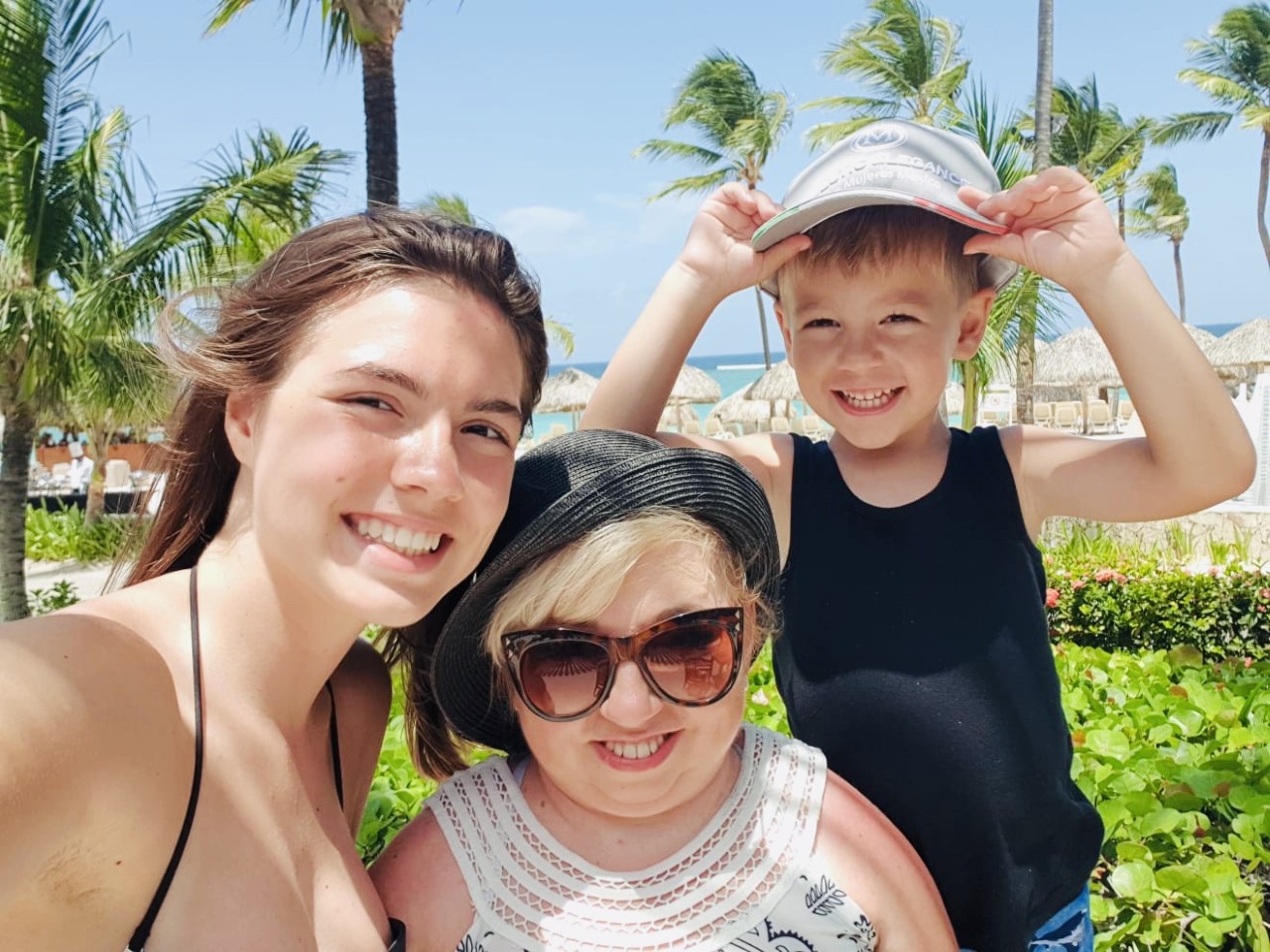 As for education, Maja graduated as a high school PTT technician, although her desire was completely different. The "World of Beauty" school was not accessible for people with disabilities, but that did not prevent Maja from continuing her education, in fact she still does today. As a person with disabilities, it was very difficult for her to find work.

- In 2006 I opened my first beauty salon in Skopje, in Kisela Voda, Hair and Beauty Salon "Red Marie", I worked on facial treatments, nails, makeup and eyelash extensions. Maybe I was the only woman with special needs in Macedonia who managed a salon and worked with that diagnosis. To be honest, at first I was afraid of how I would be accepted by the clients themselves, how they would see my work, but fortunately I had great support from them, regular clients, who to this day are my friends, and of course the companies I worked with. . But, unfortunately, there were those who did not believe in my work, there were strange looks and questions such as: "Will you make me up? Who will treat me, you? ”There was even ridicule from those who simply left without any excuse. But I was not angry, but I regretted that they were not educated. It was these people who gave me more power to prove and show them that people with disabilities are the same as all people, that they too should be accepted by society. I continued with my head held high and my team and I worked successfully for 11 years. To be with this diagnosis with daily pains, difficulties and challenges, and to be a mother and a salon owner, was not easy. But I love my job. Work responsibilities make you forget about pain, simply that you exist and that you are capable (useful), that you are alive.

Then they decided to move to London with their family, because, as Maja says, she did not see much prosperity in Macedonia, not only from a financial point of view, but also for her health condition. In our country, the movements around the city were limited and it always depended on someone to take her and bring her back, because she could not use public transport. Also, the entrances to the institutions, even some of the hospitals, were not accessible, or had ramps that are only for viewing, tells Maja and adds:

- It is accessible everywhere in London, I can do it alone in the subway and on the bus. Here people with disabilities have rights that are respected and do not look at you as if you were a Martian. Healthcare is free, I do not pay for examinations, therapies and medicines, unlike in Macedonia. Most of all I wanted my children to be educated here, of course I wanted to upgrade and continue the business here, as I did. There are no connections, no friends and it flows normally. Apart from continuing my work, recently my sister Jasmina and I created our "Majestic Beauty & Nail Academy". With great pleasure, I can boast that we are the official representatives for Great Britain of the German brand "Nail2000". We also promoted our brand "Majestic tools" - professional nail tools. We have accredited training and online courses. And we do not stop here, we continue with new ideas and challenges. 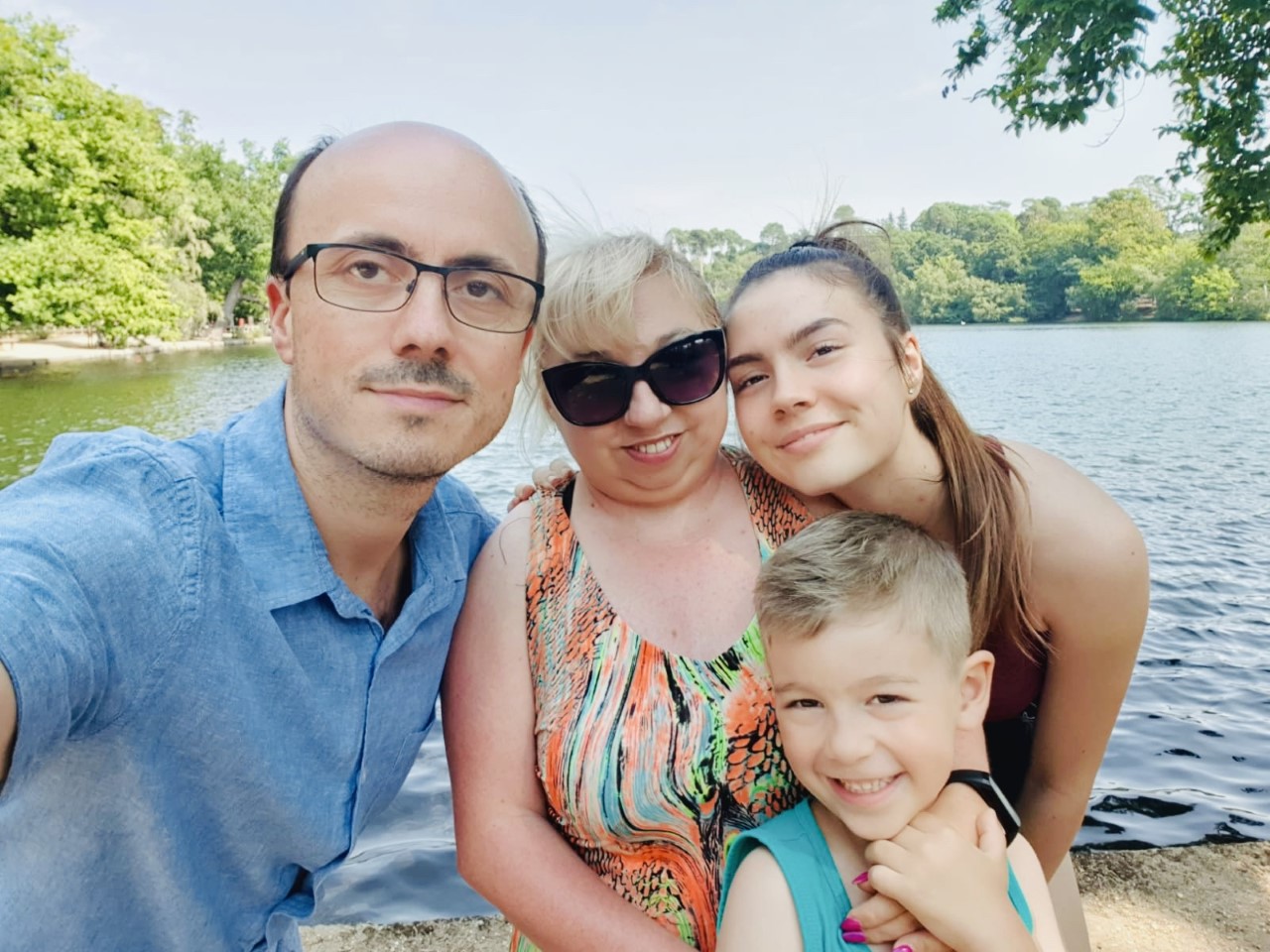 Maja is completely honest and says that, although she loves her homeland, she can not say that she misses it, on the contrary, she regrets that you did not leave much earlier. The only thing she misses is her parents and the youngest sister Ivana. He says that he neither has nor wants to have a reason to return to Macedonia. They have been in London for five years, and Maja claims that they have achieved much more there than they could in Macedonia in 10 years.

Their daughter, Maja and Bobby, raised her to look normal, to accept other children with special needs. It was difficult for them on that road, there were looks when Maja would show up at the school, both from parents and children, but they did not pay attention. Maria always answered the unpleasant questions wisely, and now she is learning from her brother, who of course has questions why mom goes with crutches, why her leg hurts and so on. 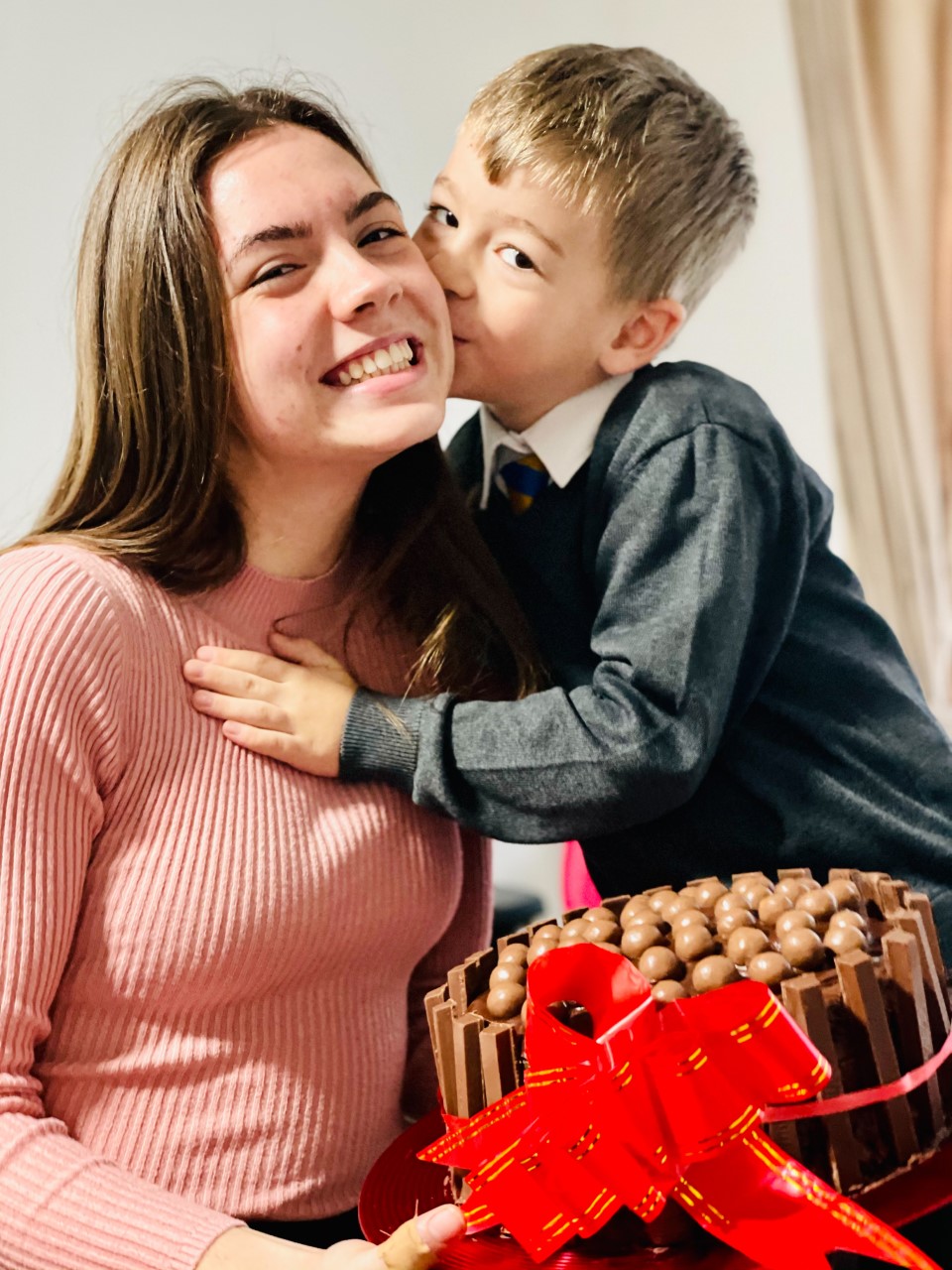 Finally, this is Maya's advice for all women who face a problem similar to hers, and in general, for any woman who feels any weakness, lack:

- When the pain can not go away, you need to learn to live with it. The pain is temporary, the cancellation lasts forever. Broken crayons also paint. Set goals that you will strive to achieve throughout your life. Do not give up, nothing is easy, but without a fight - there is no victory. With a proud head, believe in yourself and do not let anyone stand in your way, especially negative people around you. If you focus on the problems - you will have more problems, but if you focus on the opportunities - you will have more opportunities. My story is long, but start writing yours.

Well, our dear ones, the next time your head "jumps" due to a broken nail, please remember Maja.

PHOTO: The singer went for a shrinking of her stomach, so she showed shocking photos of cuts and bruises on her body

VIDEO: A 47-year-old record fell, Westbrook made history in the NBA League!

Andov for Free Press: Changing the anthem is pre-election marketing, and it is not a priority

Is it possible to lose weight in just 14 days? Yes, with this weight loss protocol!

VIDEO | Stojmanovski: With the money from the placement in the European Championship, FFM to help the clubs

Dunavka Trifunovska announced the news about the separation with Vane Cvetanov: The past should not "release larvae" in the present

Pendarovski-Mimi Kodeli: Macedonia and Albania deserve to start negotiations with the EU ...

Gere: We all want to open negotiations as soon as possible, but we must ...

Domestic companies part of a digital networking platform with global chains for ...

Dimitrov: The blockade of Northern Macedonia is also a problem of the EU

Spasovski: From Monday we start with the re-issuance of personal documents

VIDEO: "From us to us" organizes a lecture for teachers and parents, against ...

Ombudsman: The cessation of issuing personal documents is a violation of the rights of ...

VIDEO | Stojmanovski: With the money from the placement at the European Championship, FFM to ...

VIDEO | Andonovic: The Saudis who killed Kashogi were trained in the United States ...

With the lowest price we can not give the highest salary

There are no negotiations for Macedonia, and besides that for Albania?

A strong storm hit the cherries and peppers, the farmers uninsured