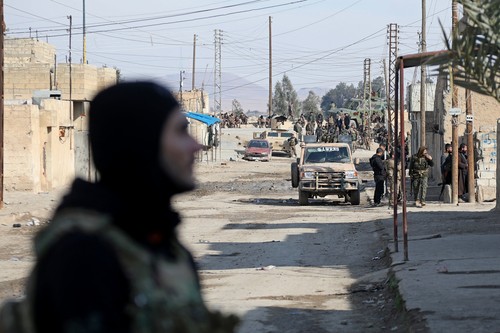 The Kurds, aided by the US in Syria, regained full control of the main prison attacked by a group of Islamic State (ID), which ended the largest jihadist attack in the country in three years, writes Al Jazeera.

In the January 20 fight for the release of jihadists from a Kurdish northeastern prison Hasake 181 people were killed in the northeast - 124 jihadists, 50 Kurdish fighters and seven civilians, according to the Syrian Observatory for Human Rights (SOHR).

The fighting also forced 45.000 people living near the prison to flee their homes, the UN said.

"Full control of the prison came after the surrender of all jihadists who barricaded themselves in it," said Farhad Shami, a spokesman for the Kurdish-dominated Syrian Democratic Forces (SDF), which is leading the fight against IS in Syria. a country that has been at war since 2011.

The SOHR confirmed that Kurdish forces had taken the prison, but said their operation to kill other IS members was continuing. More than a hundred jihadists inside and outside the prison took part in the coordinated attack on the penitentiary that began on January 20th.

Prisoners who attacked the guards and took weapons from the warehouse also took part in the fights on the side of the attackers who managed to enter the prison.

This is the biggest attack on IS since its defeat in Syria in 2019 by Kurdish forces. Truck bombs and heavy weapons were used in the attack.

The Kurds were assisted in the release of the prison by US troops from the Washington-led international anti-jihadist coalition.

The SOHR says an unknown number of jihadists have managed to escape since Thursday. More than 1.000 have surrendered to Kurdish forces since Jan. 20, the FDS and SOHR said, and at least 3.500 jihadists of various nationalities have been in prison.

UN and human rights organizations have reported hundreds of juveniles detained in the former penitentiary. So far nothing is known about the fate of these children.

On Wednesday, the Kurdish autonomous administration, which controls large areas in northern and northeastern Syria, again called on the international community for help, expressing fears that IS could be strengthened by recruiting new fighters.

"This is an international problem that we can not solve on our own," he told AFP Abdel Karim Omar, a senior local official.

Despite constant calls from the Kurds, most Western countries refuse to return their citizens who are in prisons and camps and they return in very small numbers.

"We have defeated IS territorially, but we have not eradicated the terrorist ideology," Omar said.

In this prison attack, experts see a new stage in the strengthening of IS, which retreated into the Syrian desert after defeats in 2019 in Syria and 2017 in neighboring Iraq.