Kovacevski: New potentials for cooperation with the Vatican in areas of common interest 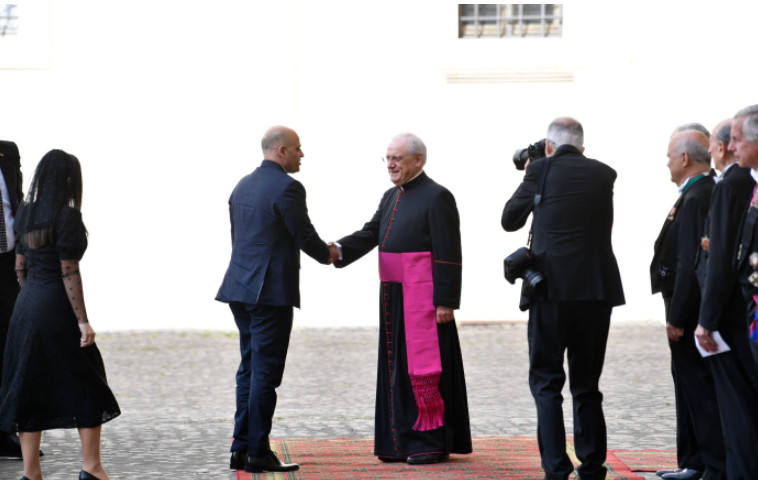 Within a visit to the Holy See, as part of the program for marking May 24 - Day of the All-Slavic educators Saints Cyril and Methodius, Prime Minister of Northern Macedonia Dimitar Kovacevski, together with the Minister of Foreign Affairs Bujar Osmani had a meeting with the Secretary of State of the Holy See Pietro Parolin and the Secretary of State for Relations Paul Richard Gallagher.

It was emphasized at the meeting that the diplomatic relations between Northern Macedonia and the Vatican since the establishment of diplomatic relations have been continuously developing with a high level of mutual trust, understanding and friendship, the government press service said.

The crown of the strong dynamics of mutual friendly relations, it was said at the meeting, was the monumental visit of Pope Francis to the Republic of Northern Macedonia in May 2019, an event of exceptional importance not only for the promotion of bilateral relations, but also for the region.

The interlocutors stressed that the spiritual ties through the civilizational legacy of Mother Teresa and Saints Cyril and Methodius, are translated into friendly political relations with the Vatican, which in recent years have been confirmed by the growing dynamics of bilateral meetings at the highest level.

The meeting also focused on the preparations of both parties for signing an agreement, ie a concordat between Northern Macedonia and the Holy See to regulate the status of the Catholic Church in our country, which will open new potentials for cooperation in several areas of mutual interest. says in a statement.

On the day of the all-Slavic educators Saints Cyril and Methodius, the celebration continued during the day by laying a wreath on the memorial plaque in Macedonian in the papal basilica of Santa Maria Maggiore. The program on the occasion of the celebration of the Holy Brothers Cyril and Methodius continues in the afternoon with a concert by the world famous tenor Blagoj Nacoski.