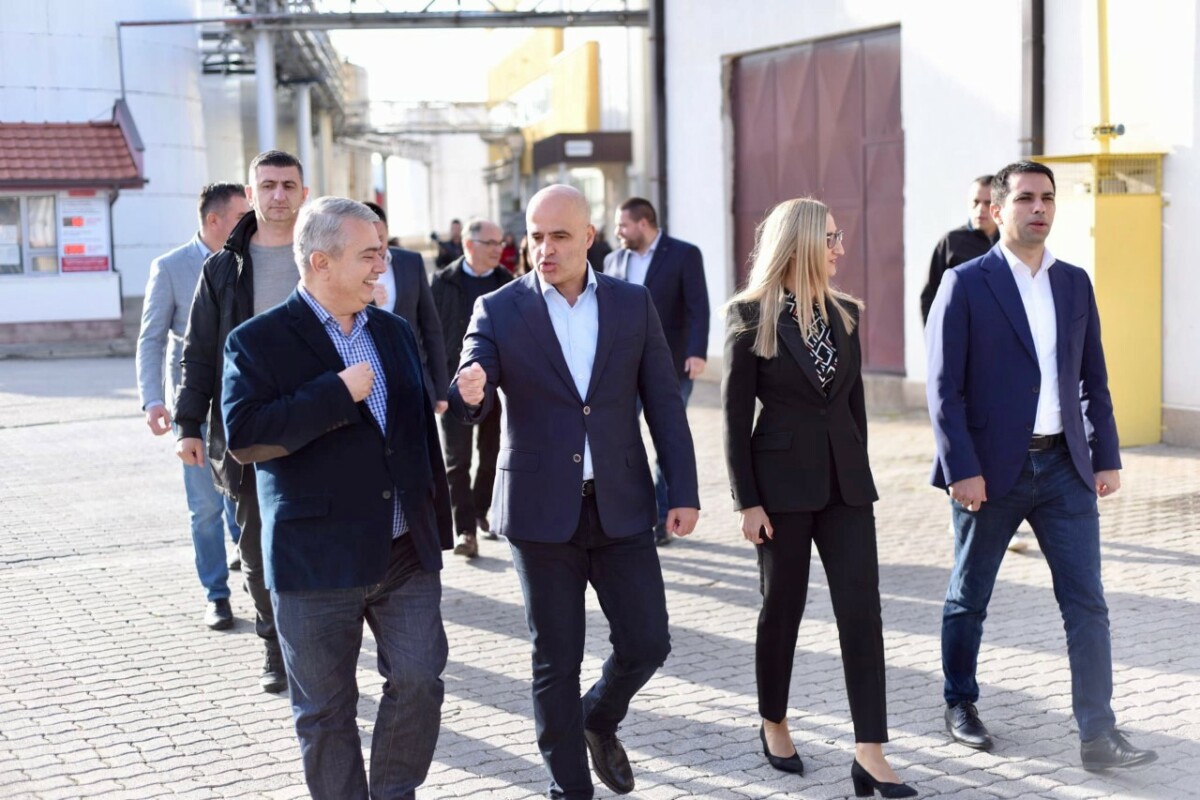 The President of the Government of the Republic of North Macedonia, Dimitar Kovacevski, today visited the "Brilliant" oil factory in Shtip, whose production has been restarted by AD "Vitaminka".

Kovacevski said that in this period of severe economic crisis, the domestic capacities for the production of basic food products, including edible oil, are at full capacity, and the measures that were adopted by the Government are aimed at avoiding price shocks and protect the citizens.

- In this period of severe economic crisis, the domestic capacities for the production of basic food products, including edible oil, have been put at full capacity, and the measures that were adopted by the Government aim to avoid price shocks and to protect life standard of citizens. It is in this direction that the Government recently made decisions on a preferential tariff for electricity lower than the stock exchange tariff, which affects the reduction of the prices of basic food products, says Kovacevski.

He emphasized that according to the data published these days, a total of 518 entities, of which 235 production capacities of basic food products have applied for the supply of electricity at lower prices through "ESM Sales" and they will be supplied with electricity at a price of 85 euros per megawatt hour, which should affect the reduction of prices of basic food products.

The Prime Minister pointed out that on December 1, the initial results of the measure for cheaper electricity will be seen on the market, and according to all parameters, a reduction in the price of the products by at least 10 percent is expected.

- I would also like to mention that the most important thing for companies from the food sector is to have domestic raw materials, that's why we put a strong focus on increasing primary agricultural production. Specifically in the case of domestic sunflower production. We ensured and continue to ensure in the future timely payment of subsidies and other measures to increase the areas for the production of agricultural products. And this year, before the start of the new sowing season for sunflower, we paid the subsidies, so that farmers could sow on time, so that they could have money for production costs. The payment agency paid over 450 million denars in subsidies for agricultural crops, including sunflowers and oilseed rape, to over 24.000 farmers, Kovacevski added.

During today's visit to the "Brilliant" factory in Shtip, the Prime Minister emphasized that in times of crisis, the Government provides timely and non-selective support to farmers, in order to stimulate agricultural production.

- The new model for the distribution of agricultural subsidies is in that direction, which will mean solving all the long-standing problems of farmers, a fast system for paying subsidies and preventing abuses and the gray economy. In particular, the previous system according to which farmers received subsidies without showing that they achieved production, is replaced by a new "decoupling system". With the new model, we motivate farmers to produce more food, something that is very important in the conditions of the world economic and energy crisis, says Kovacevski.

Prime Minister Kovacevski together with the Minister of Transport and Communications Blagoj Bochvarski visited the "Aktiva" factory in Shtip.