Kovacevski - Dragi: EU enlargement is key to the prosperity of the region and Europe 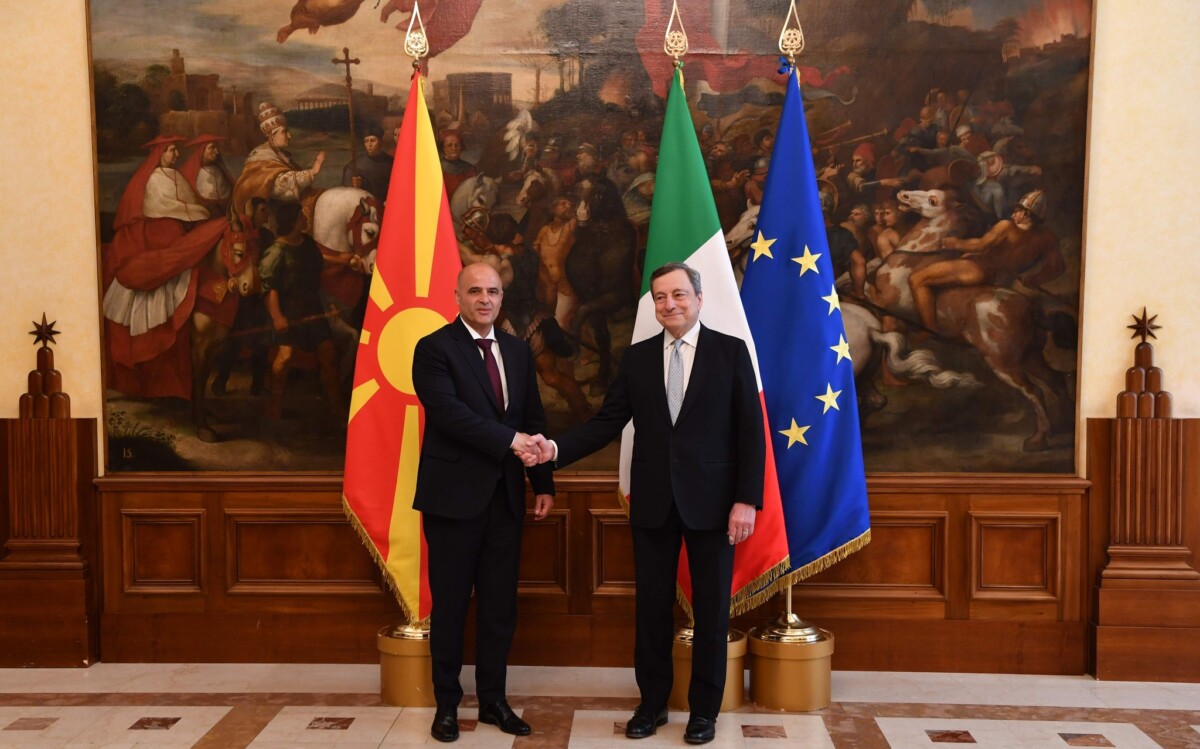 Kovacevski and Dragi, Photo: In the lada of RSM

Enlargement of the European Union is crucial for the prosperity of the region and Europe, said the Prime Minister Dimitar Kovacevski and the President of the Council of Ministers of Italy Mario Draghi at today's meeting in Rome.

At the meeting with the Italian Prime Minister, which was attended by the Minister of Foreign Affairs Bujar Osmani, the Minister of Interior Oliver Spasovski and the Minister of Culture Bisera Kostadinovska-Stojcevska, it was emphasized that Northern Macedonia and Italy cultivate extremely close political and economic relations based on intensive dialogue. and frequent meetings at the highest institutional level.

According to the government press service, Prime Minister Kovacevski, at a meeting with his Italian counterpart Mario Draghi, emphasized the role of Italy as a vocal promoter of EU enlargement to the Western Balkans, which was confirmed by a resolution of the Italian Parliament last year. The European perspective of the region was emphasized and a call was sent for urgent holding of the first intergovernmental conference for Northern Macedonia and Albania.

Prime Ministers Kovacevski and Dragi agreed that EU enlargement should be viewed from a geopolitical perspective, as a security issue crucial to the stability and prosperity of our region and Europe.

It was emphasized that the EU should recognize the moment and take into account the fact that Northern Macedonia condemned the war in Ukraine and fully aligned itself with the EU foreign policy, as true and credible partners, sharing the same values ​​of a free and democratic world. .

The two prime ministers stressed that they see the potential for further enhancement of economic cooperation between the two countries.

Italy, it was said at the meeting, is among the top 10 countries with which Northern Macedonia has the largest volume of bilateral trade and that Corridor 8 is of special importance for the promotion of economic relations, which will provide direct access through the ports of Albania. the Italian market.

The terrain is being cleared after the storm in Delchevo

DRONE SHOTS: What the Pride Parade in Skopje looked like

Osmani: The French proposal was not rejected, only the part that is disputable for us, we are waiting for a new one

Shooting and arrest in the center of Prilep