Conflict with Moscow: Concerns in Scandinavia 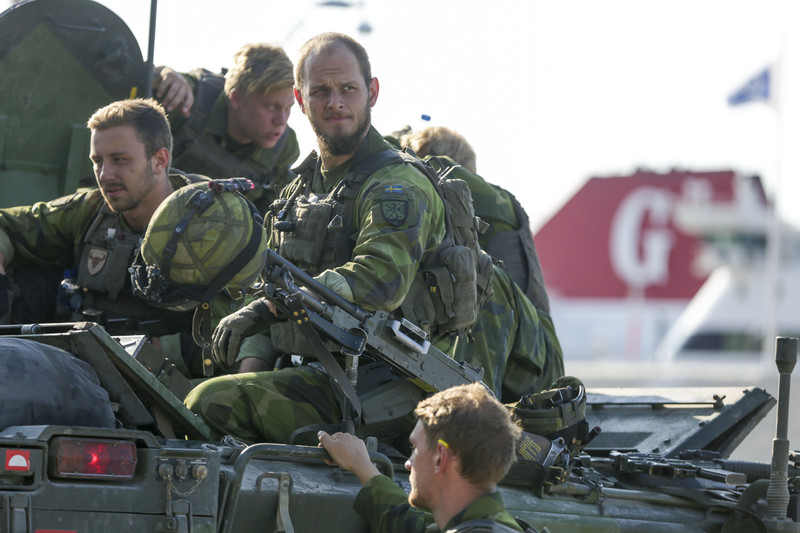 The deployment of Russian troops on the border with Ukraine has been a topic that has not been removed from the headlines around the world in recent weeks and months. The fact that three ships of the Russian Navy entered the Baltic Sea through the strait of the Great Belt in Denmark from the North Sea, went almost unnoticed. However, this does not apply to Scandinavian neighboring countries. Their governments are becoming increasingly nervous about Russian military maneuvers. Here's how Scandinavia reacts:

The Stockholm government responded immediately: Late last week, several armored vehicles were sent to Gotland Island in the Baltic Sea, and troops have been patrolling the streets ever since. The island, located centrally in the Baltic Sea and only about 350 km from the air line of the Russian exclusion of Kaliningrad, is home to about 60 people.

The army is especially visible in the main place of the island, the picturesque port of Visby. Officials in the Swedish capital have the following worst-case scenario in mind: in the next few days or weeks, Russia could not only reach Ukraine, but also the Baltic states of Estonia, Latvia and Lithuania, thus dangerously approaching Sweden. territory. Although Sweden is not a NATO member, it works closely with the alliance.

Since Russia's annexation of the Ukrainian peninsula of Crimea in 2014, Stockholm has re-strengthened its defenses. In 2017, the country reintroduced military service.

With a common border over 1.300 km long, Finland is as close to Russia as any other European country. Finland is also not a NATO member and, like Sweden, does not have a majority in the country to join the Western Defense Alliance.

The fact that the government in Helsinki has long been considered very pragmatic in its relations with Moscow cannot hide its growing distrust. For many years there has been an option to join NATO in political agendas, and the clearest sign yet of Finland's withdrawal from Russia was in December last year. Prime Minister Sanaa Marin has put an end to a long-running dispute over the purchase of new fighter jets and ordered 64 state-of-the-art F-35 jets from Lockheed Martin in the United States. Price - 8,4 billion euros.

Following Russia's request at the end of December that no other country be allowed to join NATO, Marin made a new move. She greeted Moscow in a TV interview in early January: "We will not allow ourselves to be blackmailed."

The Copenhagen government currently has a dual strategy in its relations with Moscow. On the one hand, just like the Swedish government, it increased its military presence in the Baltic Sea and sent a frigate, several F-16 fighter jets and about 200 troops there.

Denmark is part of NATO's founding members, so the mission is under the supreme command of the defense alliance. On the other hand, the government in Copenhagen has decided to give about 22 million euros in support to Ukraine, which is exhausted by the conflict with Russia. Ukrainian forces have been fighting Russian-backed separatists in eastern Ukraine since April 2014. The 2015 French-German-mediated peace plan is "under ice".

After visiting the conflict region in eastern Ukraine a few days ago, Foreign Minister Jepe Kofod took to Twitter to express concern, among other things, about cyber-attacks on Ukrainian government websites.

As one of NATO's founding members, Norway has been an integral part of the Western Defense Alliance since 1949 and lies on its northern outer border. Defense policy plays a major role in the country's self-understanding. About 8000 young men and women serve in the military each year.

Norway shares a nearly 200-kilometer border with Russia, and the two countries compete for Arctic spheres of influence. This is another reason why efforts are being made these days to show military capability to defend and prevent possible attacks. The government recently had a new military agreement with the United States, which gave Norway access to the Americans to four military bases that they could use in the event of war. In addition, one of the largest NATO military maneuvers after the Cold War is to be held on Norwegian territory in March and April this year. About 35 troops from 000 NATO and Partner countries are expected to take part in the maneuvers.

The government in Oslo, in addition to Russian military maneuvers, is currently concerned about Russian cyber-attacks. In an interview with a newspaper earlier this week, Prime Minister Jonas Gar Stere said Russian-backed hackers already had the computer systems of central Norwegian institutions, such as parliament and government, in check.