Who, in fact, was Tito: A shocking testimony to the marshal's biggest secret in decades 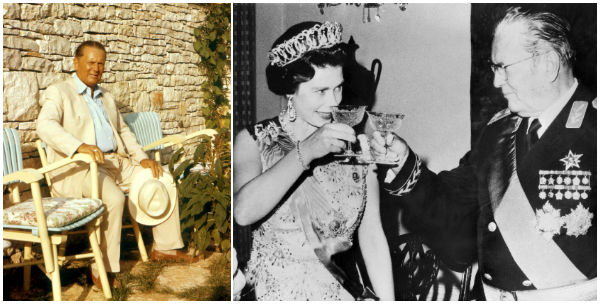 Lawyer Miroslav Todorovic Shera has been dealing with the character and work of Josip Broz Tito for years. "He claims that Tito, who is known to all generations of the former Yugoslavia, has a completely different biography than the one that was published."Courier".

The real Tito died on Easter 1915, as a member of the Lander Division. Using foreign sources from the Paris state archives, London and German sources, lawyer Miroslav Todorovic Shera says he has made shocking revelations about the true identity of Marshal Tito.

"I know that Josip Broz first entered Serbian territory on August 12, 1914 on the Drina, as a member of the Lander Division. His formation was called the Devil's Division and he had the task of securing the field. When it entered enemy territory, it sent information to the army chiefs about what obstacles awaited them.  I have his interview with Life magazine in 1952. Here Tito says: "I was very good at that job. I studied at the Non-Professional Reporting School. "I had great success on enemy territory," Todorovic said.

The wedding in Kumrovec

As he says, the only time Tito was in Kumrovec, who was otherwise known as his birthplace, was when he married Jovanka.

"Their godparents were Ivan Gosnjak and Leka Rankovic. In fact, the godfathers made him come to Kumrovec as well. Ljubodrag Djuric was the head of Tito's cabinet. Djuric said that when they went there, no one recognized Tito and did not come to greet him. He then admitted that he had told Leka Rankovi:: "Leko, this is not Tito" ", says Todorovi ра and asks the question: could a man born in the abandoned village of Kumrovec play Chopin together with the wife of the English ambassador?

- He played Verdi and Beethoven great. Musicians say that this is not possible unless he has learned to play the piano from an early age. Where did he learn that? He studied with a Lisa from Vienna. He played bridge, fencing and horseback riding. He was second in Europe in fencing. So far no one was able to send in the perfect solution, which is not strange. Here, let the historians call and say that I am talking nonsense. But let them prove it. I boldly claim that this is not the man. Fierce fighting took place between the Russian forces and that Devil Division. He, the real Josip Broz, died on Easter 1915 - Todorovic mentions and says that this Tito we know, was a project not only of the Comintern but also of the Mossad, so he continues: - His father was a Polish Jew, a rich and capable man, who from Kiev went to Vienna. Tito's mother was called Maria and she worked for that man. The French archives say that Maria gave birth to a boy, but there is no name of
the father.

According to Todorovic, Marija took little Broz to her father, and when he was a little older, she sent him to his real father to provide him with a comfortable life and music education.

- It lasted until he went to be educated to be a spy. Remember, he himself says that he went to that NCO reporting school and was good at it - Todorovic points out and adds that Tito had a female ally from the Vatican.

- It was a Frenchwoman. She had the real information about him, but when the Vatican asked for it, she soon disappeared - says Todorovic and reveals that Tito was at the top of the Freemasons, very close to Queen Elizabeth II.

- I remember the conversation with the professor from the Faculty of Philology, Vida Markovic, who was Tito's translator at the peace conference in Paris. She told me that Tito is ready for anything, that he has an instinct for self-preservation like a beast. He told me that Tito had never read more than five books in his life, but he spoke English, Russian and German perfectly. - reveals Todorovic.