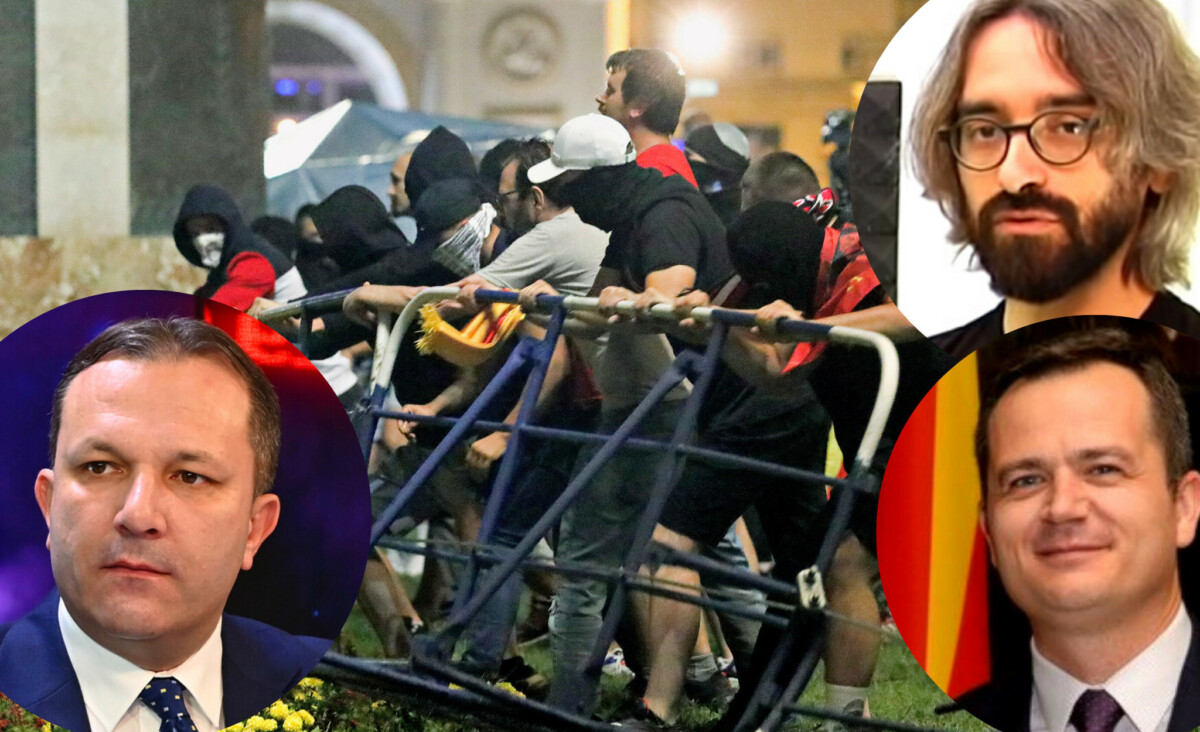 The Ministry of Internal Affairs is conducting an investigation against the organizers of the protests, which, although announced as peaceful and dignified, escalated and culminated in violence against police officers and vandalism against the building of the legislature, the government and the Ministry of Foreign Affairs. The recordings show that the police officers who secure the assembly were continuously attacked by people masked with hoods and T-shirts, who threw eggs, beccaton tiles and other objects at the Assembly.

Only 11 people from the crowd ended up in the police station last night, and 47 police officers in the hospital, two of whom were treated at the Neurosurgery Clinic with serious injuries.

- Two of the 11 detained are minors. Anyone who hit a police officer or an institution will be severely punished, Minister Spasovski decided, who did not want to reveal more information to the journalists about the organizers of the violent and vandalistic behavior that resembles the attack on the assembly on April 27, 2017.

- We have more information. A whole structure deals with this part. An entire headquarters has been set up to investigate the group. You know best who are the ones organizing the protests and calling for violence. It's not a secret. We know who the organizers of the protests are, that is part of the investigation and that is what is being done and those details will be announced additionally, stressed Minister Spasovski.

He came out to him with a direct accusation MP from VMRO-DPMNE Dragan Kovacki:

- The violence in front of the Parliament is the work of the police installations of SDSM and Oliver Spasovski. This is not the work of the people, nor of VMRO-DPMNE, but of the police installations of the government, who, by causing incidents and escalation, want the betrayal to pass quickly. This, in fact, was announced yesterday by Kovacevski, who publicly announced yesterday's scenario of violence. Pion Kovacevski should answer to the Macedonian public whether Spasovski and Zecevic are behind the people accused of violence. It is obvious that they are not good for work, but that is why they are experts in rigging and sabotage, Kovacki said.

He also asked several questions to the Prime Minister and SDSM, connecting the action of the violent group with the recent robbery of the police warehouse barracks in Ohrid from where, according to The prosecution  then tear gas, shock bombs and other items that were planned for spending were stolen.

-Where did the people with the phantom shock bombs that were thrown at the Parliament come from? Whose warehouse was robbed a month ago in the middle of the barracks in Ohrid and shock bombs were stolen? Who did drills on May 7 with protest infiltrators thrown in? How did Spasovski and Kovachevski know that the announced protests would be violent and who were the people who welcomed the column of people from in front of the Ministry of Foreign Affairs that was moving towards the Parliament? On the basis of which article of the Act or Ordinance, the police kicks the back of a person lying on the ground? On the basis of which article of the Law or Regulation, the police arrest a minor, handcuff him, put him in a police van and take him to the station? After the infiltrators had already finished their work and retreated, who authorized the use of disproportionate force by the police against the naked boys?, asked Kovacki and demanded responsibility from Spasovski and the officials who overstepped their authority during last night's protest.

SDSM sent a reaction to these accusations from MP and member of the IC of VMRO-DPMNE Dragan Kovacki:

- Tokmu Kovacki is a deserter from the Army who chose to serve the destructions of Hristijan Mickoski. Instead of spreading fake news, should Kovacki answer if he is the coordinator of former members of the Volci unit who led the violence last night, in an attempt to cause a repeat on April 27? SDSM, the institutions, together with the citizens, will not allow the violent behavior and scenarios of VMRO-DPMNE and Levica to endanger the state, announced SDSM.

Spasovski again praised them police officers and thanked them for their courage and heroism in the defense of order, peace and security of citizens.

- Thirty people masked with hoods on their heads cause all this disorder and attack on the institutions and attack on the police officers, of course the professional attitude of the Macedonian police is reflected in the fact that only intervention was carried out on those who attacked and injured the police officers, there is no not a single citizen was injured in the protests and only those who made a physical attack and caused material damage were detained, Spasovski stressed.

From SDSM in a statement this morning, they condemned the violence of the protest, which, according to the ruling party, was "organized by VMRO-DPMNE and their partner, the pro-Russian Left party."

- Last night, the public witnessed how thugs with hoods attacked the policemen, threw flammable liquids, stoned the members of the Macedonian police and tried to forcefully enter the Parliament. Similar scenes took place on Bloody Thursday, April 27, 2017, and everyone knows what that means. After last night's riots, responsibility must follow from the perpetrators, but also from the organizers and instigators of the violence, SDSM announced.

The so-called Left, through a statement, accused Spasovski and the government of SDSM and DUI of last night's violence at the protests.

- Tonight, the government of SDS and DUI showed in its entirety how they manipulate and demonstrate violence against ordinary people. Minister Spasovski obviously realized his scenario that radical scenes will take place - just to arrest innocent citizens. Disregarding neither the citizens nor the police, Spasovski put everyone in danger - just to show the thousands of citizens protesting with dignity as thugs. The Left previously warned that the government will throw in provocateurs with phantoms, in order to arrest citizens and dampen the revolt among the people, said the Left.

Incidents occurred tonight at the protest against the French proposal in front of the Parliament, after some of the demonstrators broke through the protective fence and pressed to enter the building. pic.twitter.com/68LwZxcMWw

Summary of yesterday's disturbances in front of the Parliament

Yesterday, the police arrested 11 people because of the riots in front of the assembly. Against the protesters, the police did not use either pyrotechnics or chemical means to break up the crowd, the Ministry of the Interior emphasized, adding that 47 police officers were injured during the protests, 11 of them with more serious injuries, and two with serious injuries.

- Several violations of public order and peace were observed by the protesters, who threw stones, eggs, iron objects, beccaton tiles, molotov cocktails, traffic signs, garbage cans and pyrotechnic devices, both at the buildings and at the police officers who performed official actions securing state institutions, the Ministry states.

As a result, damage to windows and facades has been reported in all three buildings: the Government, the Ministry of Foreign Affairs and the Assembly of the Republic of North Macedonia. In addition to this, the protesters broke 16 police shields, several protective police helmets and radio links, and a police house in front of the Parliament and a police vehicle were damaged.

The Ministry of the Interior takes measures to clear up the case and appeals to the organizers of the protests and to the citizens to show democratic capacity, to make the protests peaceful and democratic, to preserve order, peace and security.

He also condemned the violence the Prime Minister Dimitar Kovacevski, President Stevo Pendarovski as well as the President of the Assembly Talat Jaferi who also posted a video this morning on his Facebook profile, which shows the damage caused to the Legislature.