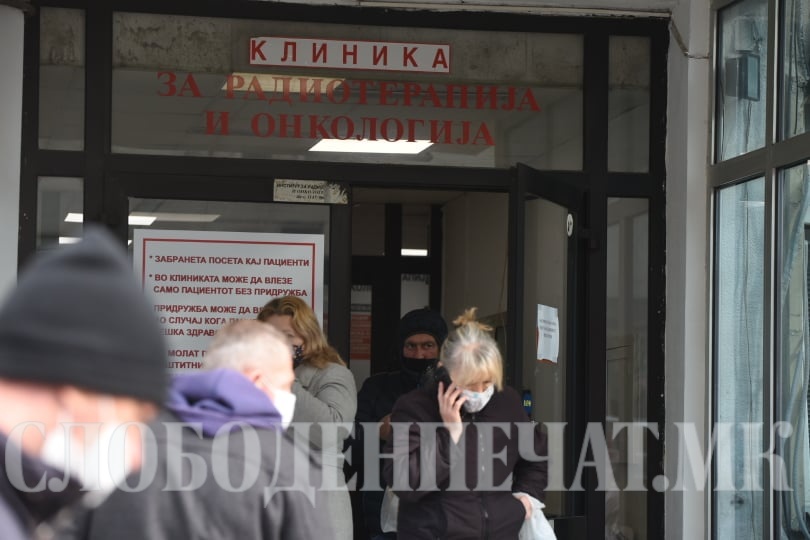 The oncology clinic shortens the therapies of breast cancer patients against the medical instructions, i.e. the doctor's recommendation for the dose of the medicine that these people should receive, "Sloboden Pechat" learned from well-informed sources. The Macedonian Association of Young Lawyers, which is already involved in representing these patients before the Ombudsman, has been informed about the scandal, and at the same time, extraordinary inspection services have gone to the field to comb the clinic for the fact that the patients do not receive the medicine in a timely manner.

To make the tragedy even greater, when the medicine Herceptin appears in the Oncology Clinic, it runs out in one to two days, that is, only some patients are called through phone calls, Herceptin is administered only to a part of the patients who are on the waiting list, and others remain suspended. Cancer patients themselves share this in their closed groups on social networks, from which it becomes evident that for some this medicine is available, and for others it is not.

The director of the Oncology Clinic, Dr. Violeta Klisarova, did not answer the question of whether women's lives are endangered in this way, with the untimely administration of ampoules for breast cancer.

The oncology clinic is rocked by scandal and lack of money in the coffers. According to information from "Sloboden Pechat", the clinic has losses in the millions of euros in the cash register, and on top of that, it does not even have medicines. The reluctance of cancer patients to talk about their problems with Herceptin therapy, as well as other drugs that are not available, is great. The reason is that they are afraid that if they complain, they will be made into more trouble, and that they will not get the medicine.

However, anonymously one of the patients says:

"Herceptin, let's pray that there is. And it should be received on the 21st day. From July onwards, I should have received six doses, and I have received only three. The procedure is for patients to receive 18 Herceptins that must be taken every 21 days. They stop the growth of malignant cells and prevent relapses. Every 21 days you have to go to the oncology clinic and the doctor prescribes a new dose for the next time, but there are none in this country. I have seven more to finish, but in the meantime I had breaks longer than 42 days between therapies because the medicine is not available on time and in sufficient quantities for all patients."

The ombudsman's office confirms to "Sloboden Pechat" that they have received a complaint from the Macedonian Association of Young Lawyers about two female patients who, contrary to international conventions, have been denied the right to have access to medicines that are paid for from the state treasury, i.e. from the budget. and they cannot be bought in pharmacies.

- At the moment, we have one petition for the drug Herceptin for two patients who had problems receiving it a year ago at the Radiotherapy and Oncology Clinic. After studying the files, we turned to the state health and sanitary inspectorate, and before that we sent an instruction to the clinic to eliminate the problem according to the constitution and international standards and the health care law, because this medicine must be available. In the patient's complaint, it is stated that they have irregular therapy and a delay in receiving hospital therapy, which is repeated, and they always receive it with a significant delay, which contributes to skipping one or two therapies a year, said Dragi Celevski from the Ombudsman's office.

The Macedonian Association of Young Lawyers told our editorial office that all the patients they came in contact with have non-continuous access to Herceptin therapy.

- For most of them, it is too late and they are left without therapy for two to three months. We do not go into the details of whether they have a tender, whether they have procured medicines, but we advocate for the right of patients to receive medical services. We, as an Association, advise them to contact the clinic and ask for information in writing when access to the therapy will be available for them. To start demanding for themselves the rights that are due to them by law. Some laws cover their rights, but in practice they are left to their mercy and their life depends on that therapy, we were told by the association of young lawyers.

In groups on the Internet, it becomes evident that the drug Herceptin comes and is used up in one to two days, while other patients remain on the waiting list without receiving therapy.

The Macedonian drug registry states that the recommended dose of Herceptin regardless of body weight is 600 milligrams and that the dose should be given every 3 weeks and the infusion should last two to three minutes.

The new director of the Oncology Clinic, Dr. Violeta Klisarova, says that the clinic is being audited and is working with the government and the Health Fund to overcome drug shortages to ensure timely therapy. In the bureaucratic response from Dr. Klisarova, it is also stated that an analysis is being worked on, which, supplemented with the findings of the audit, will be the basis for taking steps and activities to create a new system solution that will prevent abuse of the processes in the interest of patients. She did not answer what the risks are for a patient who will only receive a portion of the 18 prescribed doses of Herceptin and skip the others because the drug is not available.