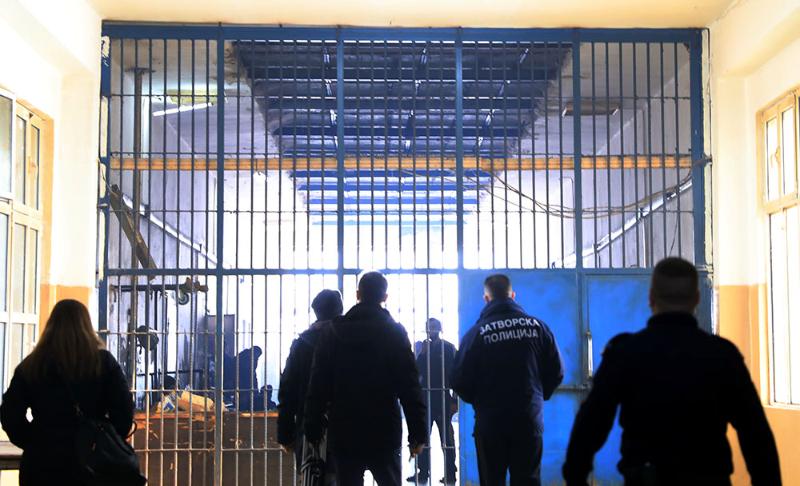 For years now, the situation in "IdrizovoIs more than worrying and below all minimum standards. Almost half of the population serving a prison sentence is in this institution, this problem is getting even more serious. ПDuring the inspection in this institution, we saw that 16 people can be accommodated in one room. In 16 square meters, with 8 beds, there were 16 convicts. There were 19 people in another room of 12 square meters. In many of the rooms the conditions are inadequate and accommodate more than 9 people. Hygiene is bad, yes cockroaches, cockroaches, taftabi, do not have access to hot water and do not have the opportunity to maintain personal hygiene. This also affects the tense atmosphere and that is why there are often fights. Regarding the material conditions, the situation in the prison in Shutka is also worrying, rooms in extremely poor condition, which have already been indicated to be closed. They are full of moisture, mold with unsuitable beds and mattresses, broken fountains, the ombudsman said at a press conference Nasser Ziberi who presented it Report - National Preventive Mechanism for 2021 which shows the conditions of police stations, prisons and psychiatric institutions.

Prison police have also failed to prevent fights, and the ombudsman has received information that officials are involved in corrupt practices, and that prisoners are paying to be transferred to institutions with better conditions, Ziberi said, adding that inappropriate behavior and degrading treatment was a particular problem. from the staff to the prisoners, and in three penitentiaries the Ombudsman received information that the prisoners had been intimidated by physical abuse.

- In the Skopje prison, rooms are used that are bad, and which the National Preventive Mechanism pointed out last year that they should be closed and not used. The detainees are placed in rooms with mold on the walls, where there is old inventory, low level of hygiene, with broken taps. Detainees complain about access to water, which has not been resolved. "Prisoners store water in plastic bottles," Ziberi added.

Only in the Tetovo prison the infrastructure has been improved. But there is a problem here as well, and that is the performance of the educational process, the Ombudsman thinks.

"A special problem is the inappropriate behavior of the employees. There are complaints in this part from several penitentiary institutions. Many convicts are afraid to make their remarks public. The safety and security of detainees is also low, there are not enough prison guards and the shortage of staff is the same everywhere. "The inhumane way of treating convicts is the use of leather belts, handcuffs," added Ziberi. of the prison police which limits the feeling of trust of these protégés with a psychiatrist. In the other penitentiary institutions it has been seen that activities have been undertaken to improve the infrastructure. But unfortunately, due to careless use of them in the prison in Strumica and the CP home in Stip, the premises are ruined. A special problem is the issue of the conditions in which persons are accommodated, health care, the process of resocialization and the educational process of minors. The overcrowding is especially pronounced in KP Idrizovo, Stip, Prilep, the prison Skopje, Bitola, Prilep ", stated the Ombudsman.

The Ombudsman Nasser Ziberi at today's press conference revealed that in order for a convicted person to have his cell phone inserted phone, prison guards employed in the prison charge from 200 to 500 euros depending on the penitentiary institution. On whether anyone will be held accountable, Ziberi says that if personal responsibility is established it will be carried out, but the work of the ombudsman is to point, not to punish.

"The import of illegal objects was mediated by officials. Very often it is by paying compensation, and the latest action of the Ministry of Interior only confirmed our findings. Unofficially, I can say that for entering a mobile phone, the officials demand from 200 to 500 euros from the convicts. In 2015, the Tetovo Penitentiary was also visited. The female minor children are in Idrizovo. The situation in Tetovo with the conditions in Tetovo is at a satisfactory level, there are enough premises and appropriate conditions. But in Idrizovo they are below the level necessary for the functioning of such a home. "They need to be transferred to an appropriate institution."

The fire in Ohridsko is completely extinguished