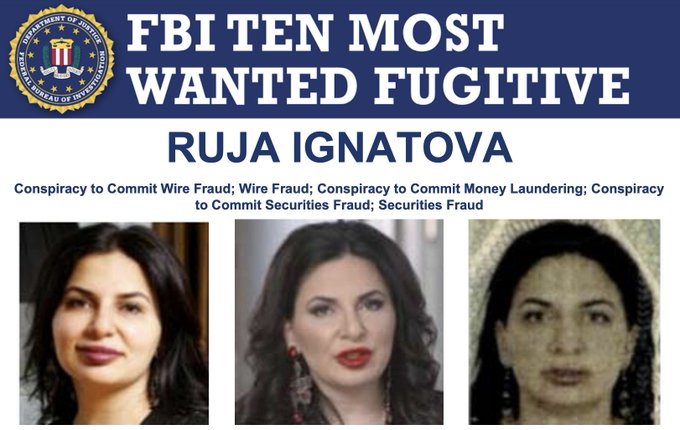 Ruza Ignatova on the FBI's 10 most wanted list/Photo: FBI

Where is the fraudster Ruza Ignatova hiding? This question is asked by the German tabloid "Bild". Fraudulent Dr. Ruza Ignatova (42) escapes with a German passport and 4 billion euros," the publication writes. "The FBI is after her." Last week it became clear that the creator of OneCoin had entered the FBI's top 10 most wanted list. The announced reward for information that could lead to Ignatova's arrest is $100.000.

The author of the article in "Bild" Kristina Drechsler describes the Bulgarian woman as "one of the biggest swindlers in criminal history". Drechsler also writes that, according to experts, Ignatova is hiding on a luxury yacht in the Mediterranean Sea.

A scam worth billions

The German edition recalls the story of the woman wanted for embezzlement of billions of euros. Ignatova was born in Bulgaria, but went to study in Schramberg, Germany, studied law in Konstanz and received her doctorate. She has German citizenship.

Ruža Ignatova is considered highly intelligent, and in the crypto company OneCoin, founded by her in 2014, investors have invested over 4 billion euros. It is believed that Ignatova and her accomplices embezzled 88 million euros in Germany alone.

Despite all the promises of its company, the so-called OneCoin does not even exist as a currency. In 2017, the queen of cryptocurrencies disappeared along with the money. Interpol is looking for her in 194 countries.

Is the crypto queen hiding on a yacht?

The article states that the FBI has placed her second on the top ten most wanted criminals, and as of last week she is the only woman on that list.

English journalist Jamie Bartlett, who is trying to track down the fraudster, wrote a book about her escape. He has spoken to people who have seen her and believes Ignatova lives on a yacht in the Mediterranean. But why exactly there? If you are twelve nautical miles from the coast, no country has jurisdiction and the authorities have no right to arrest you. It is believed that the fraudster has also undergone several cosmetic surgeries. Bild claims that investigators believe she is currently blonde and slim, with a new nose and jaw, cheeks and lips.

A particularly important hub for the crypto queen's business is Dubai. In 2020, Emirati authorities unfroze her accounts, even though more than a year earlier the US Department of Justice had indicted her and labeled OneCoin a "fraudulent cryptocurrency". A few months earlier, her former close associate – attorney Mark Scott – was found guilty of laundering $400 million.

The BBC also draws attention to claims that Dr. Ruza Ignatova is among the world's biggest bitcoin investors. It is possible that she owns 230 thousand of them. Even after the decline in the value of the most popular cryptocurrency, that would equate to around $5 billion. Money that is more than enough to help her continue hiding, the media notes.

Pahor: Only by speeding up the EU membership process will the problems of the Western Balkans be solved

Stoltenberg in separate meetings with Vucic and Kurti in Brussels