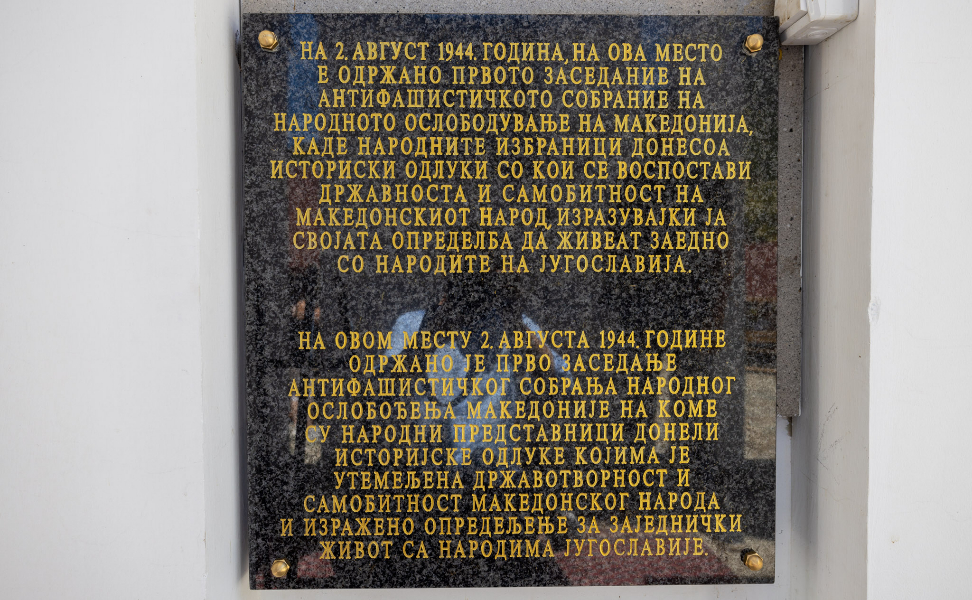 The plate for ASNOM which was placed in the monastery of St. Prokhor Pczynski for Ilinden was of a temporary nature in order to realize the visit of the president Stevo Pendarovski and the state delegation, for the first time in many years, say from the head of state's office after the information published in the media that the plaque is no longer at the place of worship.

"Then it was agreed to form working groups as soon as possible consisting of representatives from the two Ministries of Foreign Affairs, the Ministries of Culture, as well as from other state institutions that will determine the manner and form for the celebration of August 2, Ilinden in St. Prokhor Pczynski for the coming year. The goal of such formalized cooperation is to establish an institutional form for celebrating the Ilinden holiday in the monastery of St. Prokhor Pczynski," states Pendarovski's office.

And the abbot of the monastery of St. Prokhor Pczynski Archimandrite Methodius, confirmed for MIA that the agreement of the two delegations, the Macedonian and the Serbian, was to remove the plaque after the celebration of Ilinden, and to place it again when needed.

The commemorative plaque for the holding of the first session of ASNOM on August 2, 1944, was placed on the Ilinden holiday in the chapel of the monastery of St. Prokhor Pcinjski where, after a long break, the Macedonian state-church delegation led by the president Stevo Pendarovski was honored. From the Serbian side, the Minister of Foreign Affairs of Serbia attended the celebration. Nikola Selakovic.

On the memorial plaque bilingually, in Macedonian and in Serbian, it is written: "On August 2, 1944, the First Session of the Anti-Fascist Assembly of the People's Liberation of Macedonia was held in this place, where the people's elected officials made historic decisions that established the statehood and identity of the Macedonian people expressing their determination to live together with the peoples of Yugoslavia".