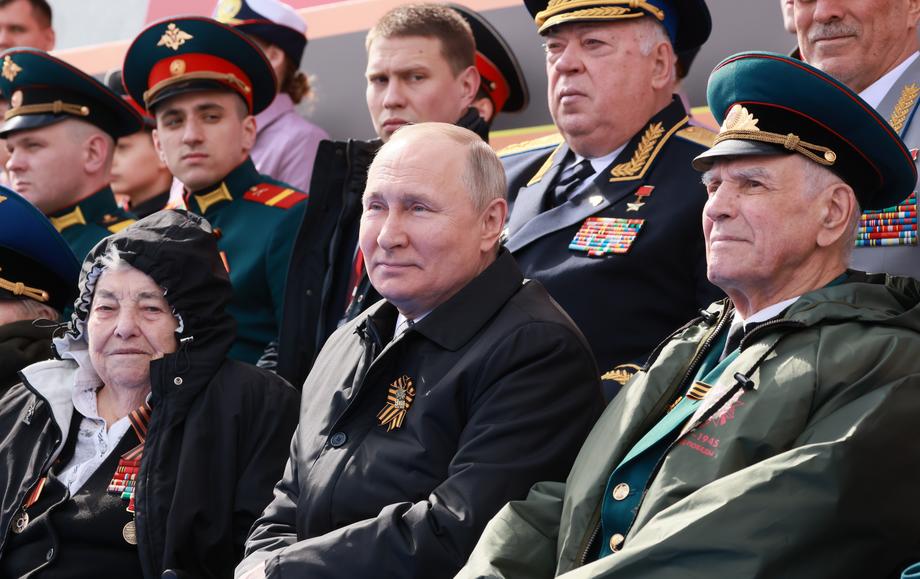 Despite all the dramatic and bizarre news coming about the war in Ukraine, one may have received less attention than it deserves. This week, Western military sources said that, according to their information, Russian President Vladimir Putin was involved in the war to the extent that he made operational-tactical decisions "at the level of a brigadier or colonel."

In other words, the president of Russia - who is formally the supreme military commander, but is a civilian and does not come from the military milieu - decides on military operations usually carried out by colonels.

Unnamed Western military sources told the British Guardian, explaining how Putin was involved in deciding the movement of forces in Donbas.

There, Russian aggressors suffered a heavy defeat last week in several successive attempts to cross the strategic North Donetsk River between the Luhansk and Donetsk regions, which, according to reports and fieldwork, resulted in more than 70 destroyed Russian tanks and armored vehicles and rocket-propelled grenades. soldiers.

Making decisions at the "colonel or brigadier level" means commanding at the brigade level with two or more battalions, or 1.500 or more soldiers.

This would roughly correspond to the size of the Russian forces that for days forced the strategic river to be completely destroyed by the Ukrainians on both sides of the river, along with the pontoon bridges they had built. From this we could conclude that Putin was personally involved in the order to cross the river at all costs, in broad daylight and with apparently inadequate logistical preparation, reconnaissance of enemy positions and covering the background with artillery and aircraft.

He sent his top general to Donbas, the Ukrainians claim he was wounded there

The sources added that Putin, however, continues to work closely with General Valery Gerasimov, the commander-in-chief of the Russian armed forces.

Ukrainians, meanwhile, suggested last week that General Gerasimov had been virtually fired because Putin was unhappy with his performance after allegedly sending him to Ukraine to take personal command of a major Russian offensive in the Donbas, Donetsk and Luhansk regions. separatists declared them Donetsk and Luhansk People's Republics, whose independence was recognized only by Russia.

"We believe that Putin and Gerasimov are involved in making tactical decisions at a level that they would otherwise expect to be taken by a colonel or brigadier," a military source told the Guardian, suggesting that the assessment was based on intelligence.

Regardless of the current relationship between Putin and Gerasimov, according to some Ukrainian media, as well as a Russian political scientist, Gerasimov was slightly wounded when Ukrainian forces shelled the command center near the occupied Ukrainian city of Izum on April 30. Gerasimov was reportedly meeting with a number of senior Russian officers at the time. The Pentagon has confirmed that Gerasimov was there, and Ukrainian officials say a number of officers were killed in the attack. The Kremlin has not commented on the allegations.

However, the very fact that the Russian general general went into an active war zone to take control of the chaotic military situation suggests that the Russian regime is increasingly prone to desperate measures that are at least unusual for a serious state with a serious professional army.

And if the claim that Putin is directly involved in military decisions and command is true, it only reinforces the image of disorder in the Russian military, along with all other indications of it - from catastrophic losses in technology, troops and generals to many dubious military successes. field for almost a three-month invasion of a much smaller and less armed country.

A staggering number of Russian generals - at least nine, and possibly 12, according to the Ukrainian military - have been killed, apparently precisely because they went to the front lines and thus exposed themselves to Ukrainian attacks in order to bring about their demoralized forces. in order and personally command in the actions led in the western armies by officers of much lower rank.

As for Putin, Ben Barry, a former British Army brigadier and ground war expert at the International Institute for Strategic Studies, made a significant remark about The Guardian"The head of government (or state) should have a smarter job than making military decisions, setting a political strategy instead of interfering in daily activities."

Again, Putin's interference in military tactics (and not just general strategy or military objectives) is not so surprising. The decision to invade Ukraine was obviously his, and according to many analysts, he made it among his closest associates without much knowledge of the military and the regime until the last minute. In addition, as Dan Sabag writes in an analysis in the Guardian, autocratic regimes usually do not favor military decentralization.

A parallel between Putin and Hitler

Professor Sir Lawrence Friedman of King's College London said the assessment of Putin's level of involvement in the war seemed plausible. victory. "It was a particular problem in the second phase of the war, in Donbas."

Of course, the idea of ​​Putin and his closest aides that Ukrainian forces would disintegrate and surrender before the Russian invasion and that Kyiv, and then all of Ukraine, would fall in a matter of days, proved to be a tragicomic fallacy based on the illusion that Ukrainians were not ready to fight for their independence.

It seems that Putin actually wanted to do some Blitzkrieg, with only much smaller and less equipped, trained, led and motivated forces than those with which Hitler conquered Europe from 1939 to 1941.

But even in this regard, Putin's behavior is reminiscent of another dictator with megalomaniac ambitions and complete contempt for the lives of enemy civilians and his own soldiers, who in the end was too impatient and distrustful of his own generals, which may have cost him defeat in the war. Of course, this is the German Nazi leader Adolf Hitler.

This parallel is not for Hitler as the mastermind of the Holocaust as the worst genocide in history, although some practices of the Russian occupiers are reminiscent of Nazi concentration camps and the massacre of innocent civilians, while the rhetoric of the Russian regime practically denies Ukrainians as one people. Ukrainian President Volodymyr Zelensky has already accused Russia of genocide against Ukrainians, which experts still disagree with.

In its analysis last month, CNN also compared Putin's war to Hitler's war, noting many similar mistakes they both made, from huge logistical problems to brutal destruction and crimes that only intensify hatred of the aggressor and the will to resist.

Hitler took over the army from the general, and we know how it ended

But in the military aspect itself, Hitler in the later stages of World War II, as described by biographer Ian Kershaw, stubbornly refused to listen to his generals' proposals and demands for a tactical withdrawal to the east, when the war began to shift in favor of the huge Soviet Red Army. Instead, he insisted on over-optimistic counter-offensives, which largely failed.

As early as 1941, Hitler became commander-in-chief of the Wehrmacht, following the first failures of Operation Barbarossa, which was stranded about 200 km from Moscow. Since 1942, Hitler has personally made all decisions about military strategy, writes the Encyclop .dia Britannica. Instead of directing most of its forces to conquer Moscow, the Axis powers concentrated in southern Russia, and it was Hitler who insisted on conquering Stalingrad.

When the Red Army launched a major counter-offensive and surrounded the German Sixth Army in the devastated city, Hitler forbade withdrawal from the city, insisting on an air bridge that had no chance of supplying the besieged forces with enough food, weapons and ammunition.

Hungry, frozen and decimated, the Sixth Army surrendered after running out of ammunition in February 1943, marking a turning point in the war. The defeats followed one another, until the last in May 1945, when the Soviet flag was flying in Berlin.

Both US President Lyndon Johnson and his administration were actively involved in the Vietnam War, and in the 1965 North Vietnam Rolling Thunder bombing campaign, they set goals that would not provoke communist China or the Soviet Union. The campaign ultimately failed, and the war ended with the US withdrawal ten years later.

Putin does not trust his generals?

However, as Professor Friedman, author of the forthcoming book Command, points out, the relationship between political leadership and military command has always been complex and often tense. "Military decisions during the war are in themselves 'intensely political' and it is up to the political leadership to 'set goals, push more commanders, ask questions,'" he said.

The aim is to ensure that there is "dialogue between politicians and the military" and that leaders do not dismiss legitimate objections or try to micro-manage combat plans at a time when they need to concentrate on broader diplomatic or political strategies.

In an extremely rare moment of candour on Russian state TV today, defense columnist Mikhail Khodaryonok gave a damning assessment of Russian war in Ukraine and his country international isolation. It's fairly long but worth your time so I've added subtitles. pic.twitter.com/0mr7WAgSx6

Putin, one might assume, simply does not have enough confidence in his generals. There are probably objectively stronger reasons for this than Hitler, who was increasingly upset as the war progressed. In this context, yesterday's report of the British Ministry of Defense is certainly interesting, according to which the commanders of the elite First Guard Tank Army and the Black Sea Fleet, who lost the command ship Moscow last month, have been suspended due to failure.

But the question is whether Putin is doing his army a disservice by interfering. Even after the catastrophe near Severodonetsk, some Russian military bloggers and experts began to openly criticize Russia's strategy.

"Until we find out the name of the 'military genius' who set up a combat tactical group by the river, and he is not publicly responsible for it, there will be no army reform," a popular Russian blogger wrote under the pseudonym Vladlen Tatarcki on his Telegram channel.

We can not know for sure, but it is easily possible, consciously or not, that Putin himself was criticized.