Ivana Hadzievska, historian and researcher: What is the meaning of "Makedonka" - the first women's magazine in Macedonia 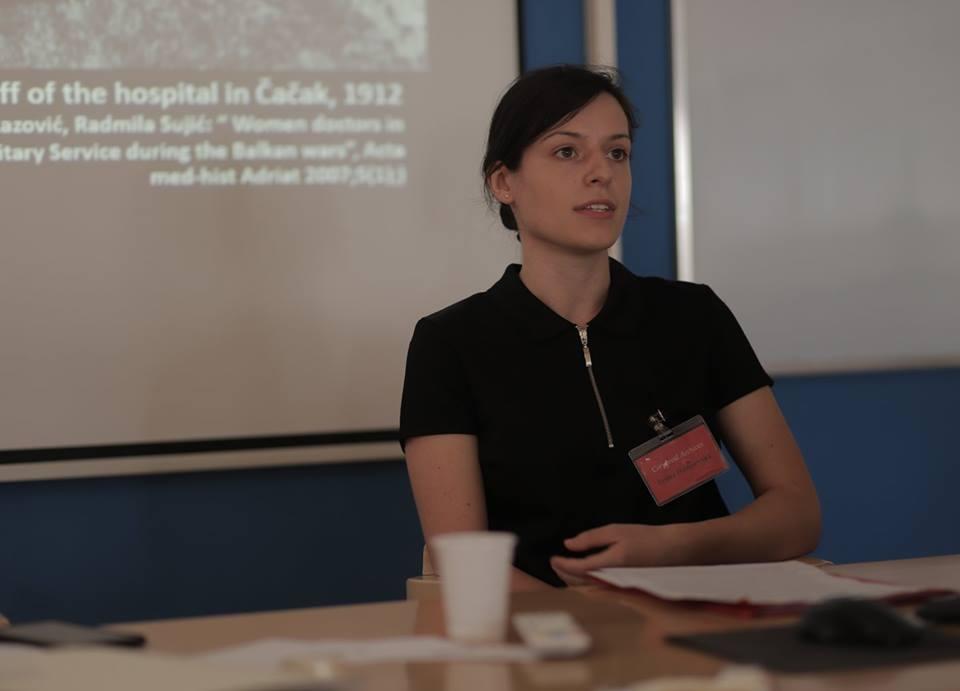 A guest in "Women's Press" / "Free Press" with her column is the historian and independent researcher Ivana Hadzievska, who writes about the importance and significance of the first printed publication edited by women and dedicated to the problems of women in Macedonia, the magazine "Macedonian". 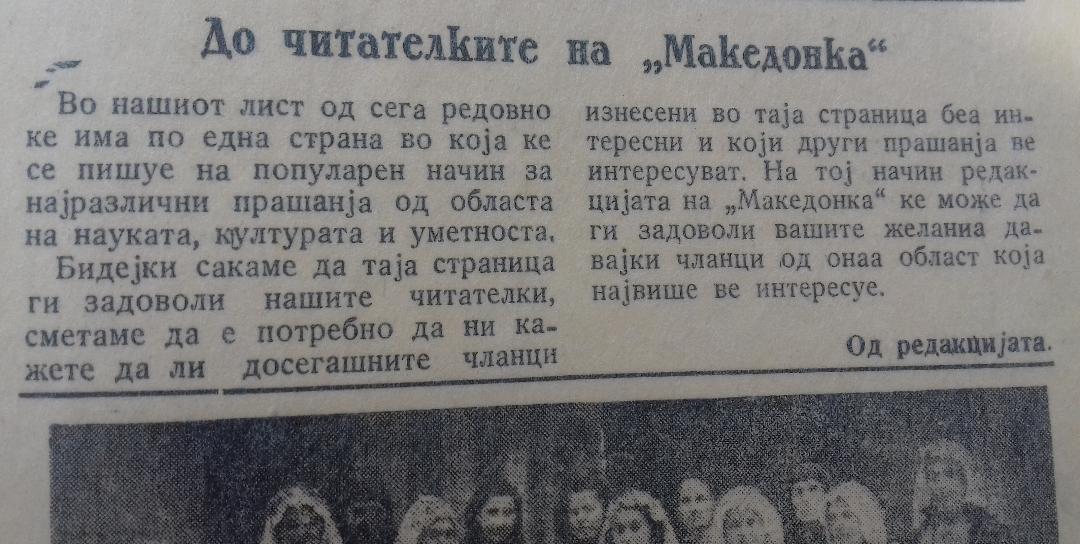 Makedonka Magazine was an organ of the Anti-Fascist Women's Front (AFZH) and the first print publication edited by women and dedicated to women's issues in Macedonia during World War II and after the creation of the state. The initiative for publishing this magazine was launched in October 1944, by the activists from AFZH and Veselinka Malinska, as the first editor-in-chief, and the first issue was published the following month. Today, the chronology, program goals and cultural heritage of this important publication on the history of the Macedonian press in general, and on the history of women in particular, are known only in narrowly specialized academic circles or in the corners for nurturing anti-fascist traditions by appropriate memory factors. Again, today they are very small groups, which means that the policies of remembrance, accompanied by historical revisionism, influenced "Makedonka" to disappear from the cultural memory. That is why, in the attempts to re-remind "Makedonka", primarily as a source for the Macedonian history of women, the condition for awareness of the contexts for the "women's political letter" and the "patriarchal historiographical view" is properly imposed. Awareness of these two contextual components is important for understanding the visual representation of women in the political space and their profiling as a historical subject. Thus, the magazine was named "Macedonian" until 1953, when it was renamed "Enlightened Woman" - Organ of the Union of Women's Societies in Macedonia (editor-in-chief Liljana Maneva); in 1990, it continued to be published under the name "Woman" (editor-in-chief Tatjana Kopacheva); from 1997 to 2005 it was published under the name "новаena nova" (editor-in-chief Liljana Dirjan) and from 2005 for a short time it was published under the name "Zgodna". In fact, by following the development and changes that this publication has undergone, we can follow the changes in perceptions of women's emancipation from socialism, to the transition in the 90s, and to repatrialization in recent decades.

In this text, I will try to give a brief overview of the first issues of "Makedonka", as a good starting position for exploring the communication channels through which women began to conquer the public, and thus the political space.

The first issue of the magazine was printed on 24 pages and had a circulation of 2.000 issues, was published in a small format and once a month. The printing started in the illegal printing house "Goce Delchev", located in the village. Gorno Vranovce, Veles region (the memorial house and the museum exhibit are in disrepair today). But, until the final release, due to the war conditions, the printing was moved once to Prilep, and then to Bitola, where after the liberation of the city, the first - November and the second - December issue of "Makedonka" finally came out. The editorial team was composed of Veselinka Malinska, Nada Bogdanova, Lence Ivanova, Nada Achkova and Balgojka Demnieva, and the designer was Vasilije Popovic-Cico. Textual and visual materials were collected through AFZH district boards, which then organized village readings in the villages for illiterate women. The biggest challenge for the sustainability of the magazine was of a financial nature, because until the situation stabilized and the bodies of the state structure were established, the contributions to the magazine were voluntary and the printing of the printing presses was difficult and created debts.

The political reason for the magazine, and as the authors and editors explain, in the article dedicated to the tasks of AFZH, was to strengthen the position of women as builders of the state and to establish the right to mass and active involvement in all professions and bodies. in power, as well as connecting with women from all over Yugoslavia to jointly address the "women's issue". The main tasks set in the first issue, and thus present topics in the articles, were the mass activation of women in the final liberation of the territory and attending literacy courses. The symbolic reduction of the ethnic distance is especially noticeable, precisely through the female solidarity and the portrayal of the Macedonian woman as Orthodox, Muslim, Jew, Turkish or Albanian. There are several regular sections in the magazine, which in the first, military, issues, until 1946, are not firmly programmatically related, but can be classified as follows: political section, organizational life and tasks of AFZH, news from the interior and villages, news from Yugoslavia and the world, cultural-scientific section and professional section with tips for home or workshop. Texts relating to military and political events are written in a triune and panegyric style, accompanied by photographs by Tito and Stalin (until 1948). On the other hand, the texts that refer to women's everyday life, in the villages or in the factories, as well as the texts that have an educational and advisory purpose, differ from the first ones, because they clearly express the women's perspective in raising awareness and solving problems. They give more dimension to women's political and social profiling in public discourse, which goes beyond the typical romanticized portrayal of a Macedonian woman as a victim, martyr, fighter or humanitarian, and show us women who lived in the countryside in the mid-20th century and faced problems. which finally get a name. These women are not heroines from the front, but sufferers of violent, patriarchal rural reality, as well as the objective part of women's existence in such an environment. These articles, which are most often found in the counseling section, talk about men's drinking, domestic violence, the position of women in marriage, hygiene and protection from various diseases and topics related to women's health. It is these parts that should soon become the subject of research curiosity from which historical experiences of women's movements can be drawn, as important as those relating to the reality of the politician, partisan or intellectual of this period.

In the 19th and 20th centuries, the press played an important role in the processes of national construction, as literary, cultural and national patterns were established and destroyed through the print media. The partisan "press" played the role of a means of resistance during the war, and the "Macedonian" belongs to the anti-fascist women's press, which appears throughout Yugoslavia and has explicitly clear ideological and political tasks in achieving the emancipation of women and the creation of the new "Socialist women", which must still be read as part of the AFZH's position within the Communist Party of Yugoslavia. Perhaps the next step that should be taken by the competent stakeholders is the digitization of the numbers of "Makedonka", which are now stored in the Department of Rare Periodicals at NUB - Skopje, which would further deepen the theoretical and academic knowledge on this topic. At the same time, it would enrich the fund of available narratives of women's resistance, needed in the current state of fierce reaction to hard-won and almost-won rights, which has revealed that even basic feminist struggles have not been fully achieved.

What is she doing today: Kristina Ilievska, fashion consultant and strategist