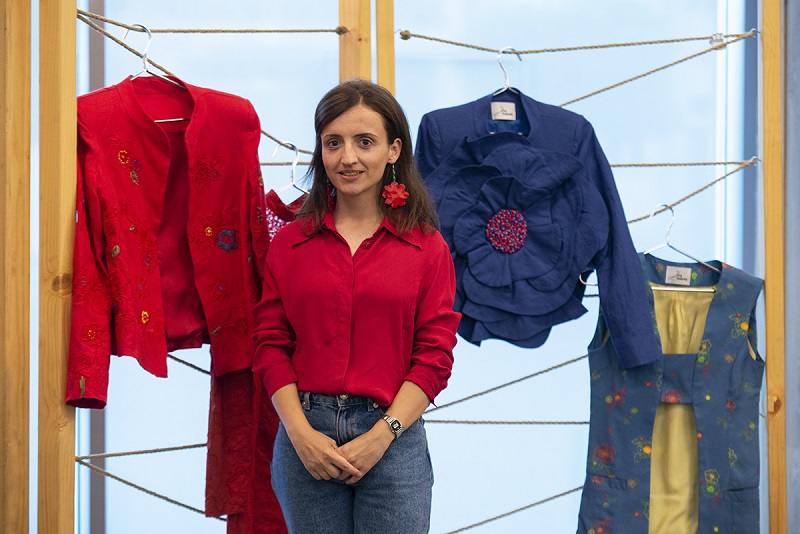 Irina Tosheva celebrated her anniversary of 10 years of active creation and design with a very unusual fashion show, and the crown of the months-long work was the presentation of the "Oya" collection on the plateau in front of "Villa Vodno".

The women's costumes of the Juruks from Radovishko, as well as the original and original elements of the Juruk culture, were a creative challenge for the fashion designer Irina Tosheva to mark her design anniversary with a new collection, which gives the traditional clothes of the Juruks a modern fashion context.

Where did the idea for the new fashion collection come from, the inspiration to look for it at the Juruks in Radovishko?

- I have seen the Juruks several times in Shtip and I have always admired their clothes and details from afar. I found them interesting, but not enough known. Last November, when I started slowly thinking about the next collection, the road took me to Radovish for a Tribenks action, where we planted trees for all the clothes purchased from my brand in the past year. It was market day and I met them in town. In the evening when I got home, I started researching the topic and the fact that there wasn't enough information online was just more motivation for me to say "this is what I'm going to do next". Thus began the whole adventure.

How did the communication with them go, how long did you spend preparing the project and what did you learn from the Juruks?

– The whole process was very interesting and educational. Since the internet wasn't much help, I went the "old fashioned" way. I visited the "Marko Cepenkov" Institute of Folklore, the Library at MANU, talked to several professors from the Institute of Ethnology, looked at slides from the 60s, read books and researches from the 70s, and also visited the Turkish Cultural Center "Yunus Emre ” for additional literature.

I started field research from February. With the support of the KHO of the Turks from Eastern Macedonia, I visited the villages several times, met and talked with the local population, directly participated in their customs and way of life. I had the opportunity to take a closer look at the clothes and the beautiful finishings, and even try them on myself.

My lack of knowledge of the Turkish language was an obstacle at first, but respect, culture and art know no languages, so communication continued smoothly. The Yuruks are wonderful and very warm people, hardworking and dedicated to the work in their community.

The presentation of the fashion collection took place on the plateau of "Villa Vodno" with the presence of many guests, associates and friends, as well as the wife of the president, Elizabeta Gjorgievska. How important is the support of top-level fashion designers?

- The office of the president, within the framework of its commitment to support the work of young creatives and entrepreneurs, provided the space for holding the event. Ms. Gjorgievska's support contributes to greater visibility of innovative approaches in design, fashion and female entrepreneurship, as well as our cultural wealth, cultural sustainability and ecology. Her open and sincere cooperation with local fashion designers, the promotion by wearing Macedonian fashion designs at all important events in the country and abroad, are an example that should be followed by all people in important positions.

Which collaborators have a key role in the preparation of the new collection?

– I collaborated with the graphic studio for textile patterns "Sun Smith" from Barcelona. We made a modern interpretation of the recognizable flowers, and in addition to the digital prints, we also made machine embroideries, which I finished by hand. For three months, I collected plastic bottles from everyone close to me and sent them to Elena Arsovska, who cut them, melted them by hand and made eco-beads, with which the models were supplemented. The knitted elements from cotton threads were recreated by my dear collaborators Radmila Hasanbegović and Melek Karahasan. I tried to translate all the distinctive elements into a contemporary fashion context, paying attention to sustainability, which is a fundamental part of my work.

For the presentation of the collection, a fashion editorial was made in collaboration with the fashion photographer Antonio Stankov and a fashion video with music from "Foltin". Protected persons of the campaign are Kristina Racićević, Kristina Filipovska, Koni Markova and Bojan Petrovski. Makeup and hair are by Irena Senokozlioska and Iva Petrovska, director of photography is Marjan Petkovski.

We worked tirelessly with Marjan on the documentary video, we drove many times to Radovish and the surrounding villages, looking for suitable locations, "chasing" the sun in which part of the day is best for filming, while assistant cameraman Stefan Milivojevic enjoyed playing volleyball with the children from Alikoc, who were very happy for us. In the late hours of May and June, Dragan Spasov worked on the editing, and Oliver Josifovski from "Ljubojna" on the music. Finally, Goga Stojkovska graphically "tweaked" everything for us.

The presentation of the collection is multimedia, including the documentary video "Petals". Does this mean that fashion designers should think much more broadly than the idea of ​​just creating a new collection?

- The documentary video "Latici" shows the conversations of several different generations from the village of Alikoch and Prof. Dr. Vladimir Janevski, folklorist, about their characteristic and colorful clothing. People who do not live in eastern Macedonia and around Debar and do not meet Juruks in the streets and markets, are mostly not familiar with this community. It also led me to do something that will remain permanent. In a few months there will be a new fashion story to tell, but this video will intrigue and educate with every viewing, whenever and wherever it is shown.

Fashion is much more than pretty "dresses". Fashion has the power to realize, unite, educate, attract. The wealth of our country is that it abounds with diverse cultural traditions. The dialogue and cooperation between them gives us great value.

What are the further plans related to the collection "OyA"?

– The "Oya" collection represents a technique of handcrafting with beads and threads, which is disappearing. In the past, it was also a "secret language" of women, through which they conveyed messages. One type of this technique is also used by Yuruka women to decorate the edges of scarves, and it is also in the collection. After the successful presentation of the collection, now the main focus is sales. In the meantime, we are also negotiating where we could show the documentary video in the country and the region, so that more people could get to know this colorful culture. It is our responsibility to maintain the connection with cultural traditions, working towards a future with sustainable development. That's the only way we will all flourish, together.

(The interview was published in "Cultural Press" number 135, in the print edition of the newspaper "Sloboden Pechat" on July 2-3, 2022)

Laureate Shuntaro Tanikawa will not be able to come to SVP