Interview with Robert Naskov: The position of producer requires new qualities and standards 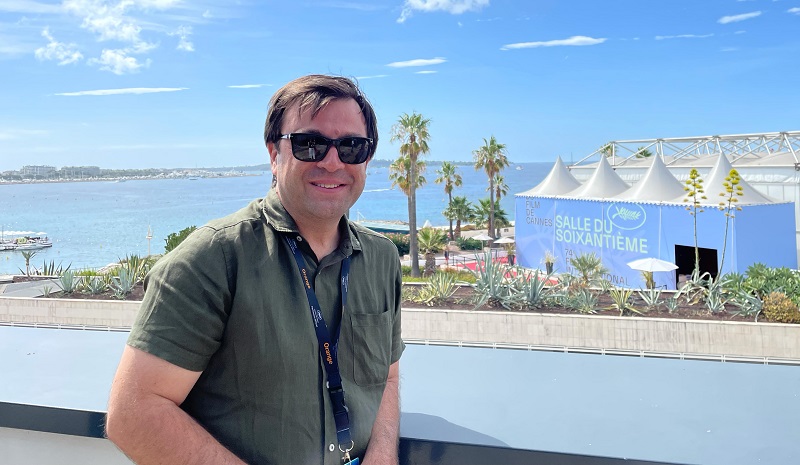 The success of the North Pole is proof that with honest and dedicated work the seemingly impossible can be achieved.

The third edition of "Kino Oko" - the short films "North Pole" by Marija Apcevska and "The Problem of Tina" by Radovan Petrovic were shown at the third edition of the festival "Zirni" in "Kotur - film and coffee" last weekend in one night. , and the producer of both films is Robert Naskov.

Film producer Robert Naskov has a strong cause for joy and pride. Even in pandemic conditions, he managed to produce a film that became the first Macedonian representative in the official competition at the Cannes Film Festival. The participation of the short film "North Pole", written and directed by Marija Apchevska in the strong Cannes competition, opened the possibility for the film to be invited to participate in other world film festivals.

A creative challenge for the "Kino Oko" production last year was the filming of the TV series "Zoki Poki". After attracting the sympathy of the Macedonian television public, the series managed to impose itself on the Scandinavian audience.

Among the latest productions of "Kino Oko" is the short film "Tina's Problem", written by Rumena Buжаarovska and directed by Radovan Petrovi.. The film had a Macedonian premiere, and last weekend it was shown at the third edition of the "Zirni" festival in "Kotur - film and coffee".

When it comes to short films, one of the systemic shortcomings in our country is that after the premiere screening and participation in film festivals, the possibilities for extended life of the achievements are exhausted. It was at that moment that we started the conversation with Robert Naskov, at a time when his film production "Kino Oko" marks 20 years since its founding.

Your job is to produce films, but what is missing from those achievements to reach the general public, other than having a premiere and being screened at two or three festivals across the country?

- The film is like any other product that should reach consumers, in this case the viewers. The promotion of Macedonian films should be part of the strategy of our cinematography, which, unfortunately, does not exist. Large sums of money were spent on developing strategies that ended up in a drawer. In this way, the promotion is left to the producers, many of whom are satisfied with showing the films only to meet the criteria of the Film Agency. Films are funded from the budget and there must be more responsibility for promoting film projects.

With Marija Apchevska's "North Pole", however, you have reached many festivals, but all over the world. Practically, what did the choice in the official selection of Cannes to increase the interest of the world film festivals for the film mean?

- Participation in the official competition of the Cannes Film Festival is a confirmation of the quality of the film. When you are part of Cannes, there is a great interest in other festivals to be part of their selections. It is sweet to decide where to send a copy of the movie.

Many were surprised by the fact that it was the first Macedonian film in the official competition of Cannes. How did you, as a producer, experience such an opportunity and what experiences did you gain with this year's participation, considering that this is not your first time attending Cannes?

- The success of the "North Pole" is a proof that with honest and dedicated work the seemingly impossible can be achieved. You have to believe in yourself and in what you do. It's amazing how you feel when you are on the other side of the most important festival in the world. It is nice when you get the attention of colleagues, when you are equal with everyone, when it does not matter where you come from, when you are accepted and respected according to the work you have done. This success should be used, because it opens doors for the next projects and successes of Macedonian films.

On the other hand, how satisfied are you with the way the information about the participation in Cannes was placed among the domestic public?

- I keep repeating that the successes in culture are not treated properly in public and by politicians and that more attention is paid to sports successes. The same thing happened with this historical success of the Macedonian cinematography. Macedonian film and culture should receive more support, because we have proved that we have authors and creative potential to compete equally with colleagues from around the world.

The portfolio of "Kino Oko" includes a number of film and TV projects. Last year was especially successful with the children's series "Zoki Poki", which in addition to the Macedonian public could be seen throughout Scandinavia. What production and distribution challenge was that?

- It is wonderful to work with children and for children. Screening the most famous children's book with which many generations grew up was a huge production and creative challenge. We have created a series that has universal values ​​that work everywhere. I believed that the series has high production and educational values ​​and that it can be shown in all territories. I am extremely happy that I found a real distributor who believed in the series and who placed it on a territory with the best educational system in the world and on which no Macedonian TV program has been shown so far.

This year "Kino Oko" celebrates its 20th anniversary. Is it possible to briefly say what the baggage of this film production contains?

- I am proud of the reputation that "Kino Oko" has built in the past 20 years and that has grown into one of the most respected production houses in the region. Behind "Kino Oko" are a number of successful film and TV projects with the highest ratings in Macedonia, projects that have been successfully screened at festivals and promoted Macedonian cinema around the world. Many Macedonian and world famous actors, authors and film professionals participated in these projects. I am overjoyed with the fact that "Kino Oko" will go down in history as the first Macedonian production company, which participated in the official competition of the most prestigious festival in the world and whose program was shown in all Scandinavian countries.

You have a degree in FDA production and have been producing films all your life. From personal experience can you make a comparison in the work in the film industry from your beginnings and now?

- The film industry has greatly changed the way projects are financed and produced. The role of the producer is different. The function of producer requires new qualities and standards. You must be educated, creative, informed and have extensive knowledge in various fields. Unfortunately, we do not pay enough attention to these criteria.

What is the reason for the so-called "new wave" in the Macedonian film production?

- The facts show that in recent years Macedonian films are present at the world's largest film festivals and events. This success is due to a generation of filmmakers who think differently in film and who have gone through the process of creating a film through various workshops and seminars. The topics they deal with are current and affect people all over the world. I look forward to the new approach of Macedonian authors. But if this "new wave" is not properly supported, it will soon be forgotten.

What next projects is "Kino Oko" working on in this period?

- Next spring, the production of the film "Evening Act" by Vasil Hristov will take place, and I hope that next summer we will be able to make the Macedonian audience happy with a new season of the series "Zoki Poki". 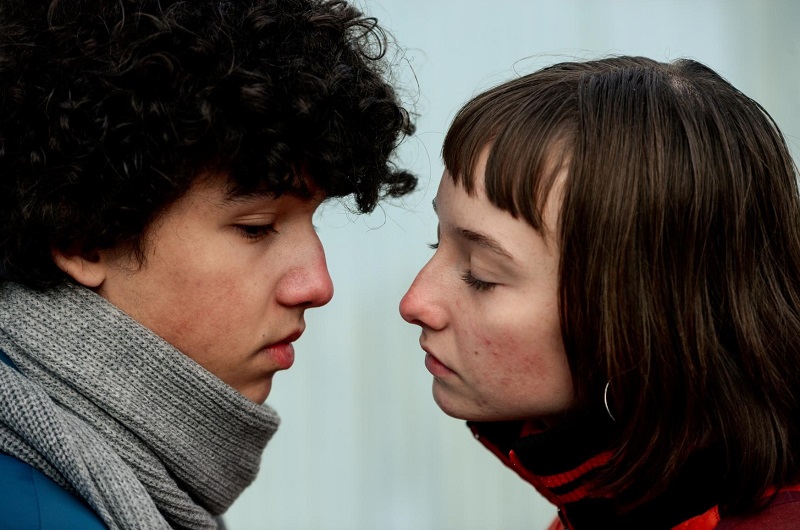 The film tells the story of a 16-year-old girl who tries to find her where she belongs. The main roles in the film are played by Antonija Belazelkoska and Luka Mitev. The director of photography is Vladimir Samoilovski, the costume designer is Biljana Grgur, the scenography is by Kiril Spaseski, the editor is Dragan Von Petrovic, the make-up is by Goran Ignjatovski, the tone design by Igor Popovski and Bojan Palikukja, the casting director is Kirijana A. Nikoloska.

The producer of the film is Robert Naskov. The film is produced by "Kino Oko" in co-production with "Servia Film" and "Forgrade" from Serbia and "Tivoli Production" from Hungary. It is financially supported by the Film Agency of Northern Macedonia and the Serbian Film Center. 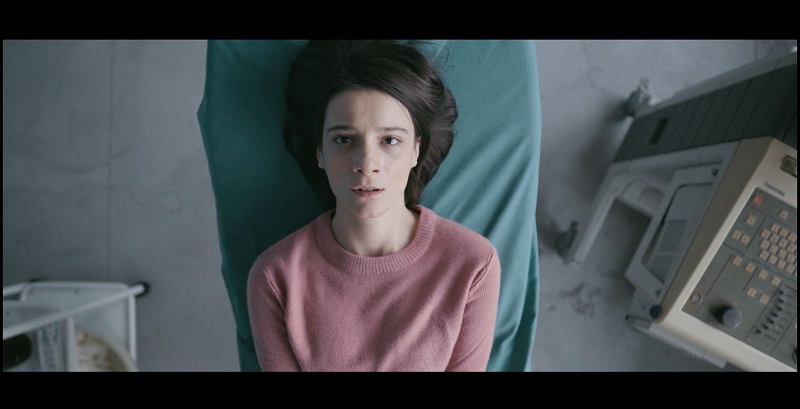 The Macedonian and world premiere of the short film "Tina's Problem" directed by Radovan Petrovic took place in late June at MKC Park. The film is written by Rumena Buжаarovska and produced by Partizans. It is an adapted story, which tells the story of 22-year-old Tina, who after losing her virginity, goes to the first gynecological examination.

The film stars Dusica Nastova, Zaklina Stefkovska, Jordan Simonov, Tamara Ristoska, Emilija Micevska-Trajkovic. The producer of the film is Robert Naskov, the director of photography is Andrej Lembanov, the set designer is Ilina Angelovska, the costume designer is Zaklina Krstevska, the make-up artist is Irena Senokozlioska, the tone design is Nenad Stefanoski and Dragan Spasov, and the editors are Radanovi Вар Varovan. The film is funded by the Film Agency of Northern Macedonia.

An expert review of the church masterpieces of the Ohrid Archbishopric by Dr. Snezana Filipova has been published

The exhibition "Borders" brings new and unknown areas of art