Interview with writer and academic Luan Starova: Every book has its own destiny 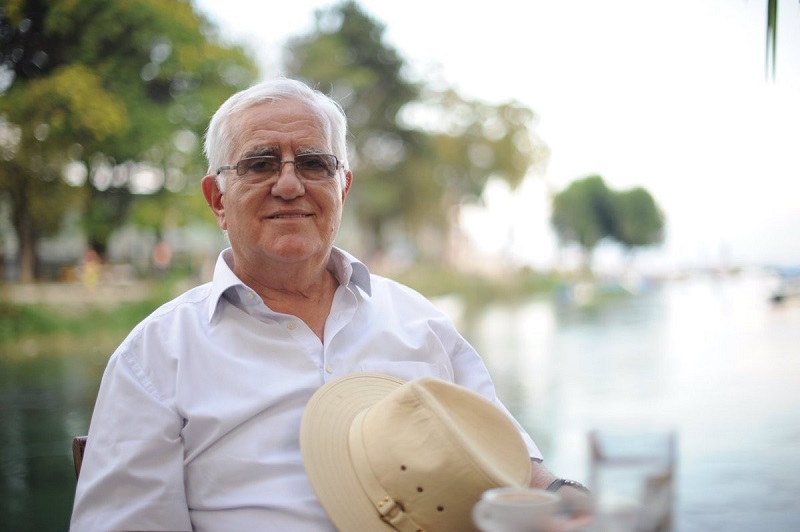 With the latest novel "Baba", the writer and academic Luan Starova supplemented the series of 20 books published in the literary cycle "Balkan Saga", which he started in 1992 with the novel "Father's Books".

The literary cycle "Balkan Saga" has a special place in the work of academician Luan Starova. The cycle was initiated by the father's books he inherited. Searching for the messages left on the pages of his father's books, Starova creates an extensive literary opus of 20 novels based on family history.

The novel "Baba", as the latest book in the cycle "Balkan Saga" by Starova, has been published by the publisher "Publisher".

Through the character of Baba Hazbije, you go back quite far in family history, but also in the way of life in the Balkans. How did you manage to preserve the memories of those times and tell them in the novel?

"Happy nations have no history" (Gilles Michele), but "the Balkans are faced with a history that is too strong to deal with" (Winston Churchill).

From these two sayings one can best understand the Balkan tragedy, which reached its culmination in the twentieth century: with the two world wars, with the Balkan wars, with the disintegration of Yugoslavia and with the fratricidal wars. Almost every Balkan family, throughout its hundred-year history, will have to face its consequences in one way or another. In addition to the "official history of the winners", there is an unwritten history of every Balkan family.

Half a century of history is written in the life of my grandmother, Mother Hazbije: in that period she creates and saves her family of three daughters and two sons, far from her parents who left for Turkey. Baba Hazbije brings a new spirit and hope to her family - homeland.

Women in those days had a completely different function in the family and position in society. What symbolism does the character of grandmother Hazbije carry in the novel?

- In almost all Balkan nations, the family, not only in the key periods of history, was a real "Piedmont of perseverance", in which the key function was played by the woman - courage. Nobel laureate Albert Camus will rightly say that he always "puts his mother before the state" for him. Grandma Hazbije also "lives to save her family", which becomes her real homeland after all of her left for Turkey.

Almost 30 years have passed since the publication of "Father's Books" (1992), a novel with which you opened the literary cycle "Balkan Saga", which now contains 20 novels. Do you remember the first thought that led you to create this dazzling mosaic of novels filled with many characters and events?

- Literature can mean the search for freedom in all its forms. Literature is closest to providence. I inherited my father's books written in different languages. Marcel Proust said that the writer dies twice, the second time is when his library disappears. I wanted to keep my father's books alive by searching for their messages. Browsing through my father's books, I came across individual pages marked with ashes. I immediately discovered the secret: a passionate smoker and reader, my father in strong concentration, forgot to shake the ashes in the ashtray and it fell on the read pages. The ashes will mark the itinerary (signpost) of my quest for his life. The stains of ashes on the open pages of his father's books seemed to be his call beyond life, to search for the secrets of his existence, of his family. As if it were a phoenix message. Not without reason, I started searching for the secrets of his books.

According to a Latin proverb - every book has its own destiny. So, for example, from the books about the goats, found in my father's library, I documented the novel "The Time of the Goats", such was the case with "The Eel Road", "The Balkan Key", "The General's Love" and so on. to the last book - the novel "Grandma".

The first book of the "Balkan saga" entitled "Father's Books" was written in 1992. It is a kind of matrix of all twenty books written and published so far. The "Books of the Fathers" were followed by "The Time of the Goats", "Atheist Museum", "Transplanted Land", "Balkan Key", "Fortress of Ashes (Sigils)", "The Road of the Eels", "Ervehe - a book for a mother" , "Balkan Sacrifice Goat", "The General's Love", "Polyphonists", "In Search of Ellen Leibovitz", "Embassies" and "New Embassies", "Balkan Babylonians", "The Return of the Goats", "Border", "Janissaries" ", Constantinople Emigrant" and "Grandma".

The stories in most of the novels are intertwined with life and mythology in the Balkans. Besides telling your family history, what is your personal definition of people who have lived and continue to live in the Balkans?

- Having an "irregular history", with long boundaries imposed by others, the Balkans, without their own historical continuity of regular institutions, often resorted to myths, which were almost identical in all Balkan nations. With these myths, the Balkans seemed to want to oppose the ruthless history. Such is, for example, the myth of the "embedded woman" in the foundations of large buildings, such as bridges, temples, fortresses and others. These myths are followed by the great Balkan writers, such as Ivo Andri,, Ismail Kadare and others. The woman was to represent the act of the greatest sacrifice. In my novels "Ervehe - A Book for a Mother" and "Grandma" it witnesses another kind - sacrifice in the daily struggle for the survival of the family.

The cycle "Balkan Saga" is highly valued by domestic and international literary critics. French literary criticism ranks them among the great European novels. You are the recipient of the highest French decoration "Commander in the field of arts and literature", as well as the holder of the designation Officer of the Legion of Honor. Many novels have been translated into twenty different languages ​​and have won top literary awards abroad. What is the reason for such a reception of your novels?

- I remember the instruction of the writer and literary theorist, Robert Male, who after the publication of my novels in France said to me: "You, of course, could not follow the French aesthetic imperatives, to enter the French literary corpus "but it remains for you to testify to your differences in a cultured way."

When I write, I never think, far from it, whether the novel will be published, awarded or published in another language. It is essential for me to be as focused as possible on what I am writing. To experience the personal catharsis of what I have written. The relative success of my novels abroad is perhaps mostly due to the attempt to present a possible Balkan synthesis of different spiritual values ​​immanently present in all Balkan nations.

I would like to point to the example of my reader Ellen Leibovitz, when we are at the reception of my novels abroad, and especially in France ("Father's Books", "The Time of the Goats", "Atheist Museum", "The Coast of Exile"). following the events of the bloody Yugoslav drama in the media and reading the above novels, she wrote to me, among other things, that she "discovered a completely different picture of the Balkans, far from any barbarism attributed to the Balkans."

In the domain of perception of the novel The Time of the Goats, it is worth quoting a letter from the reader Ellen Charpentier from Paris: "My brother Constantine read your book 'The Time of the Goats' in French and gave it to my father. They were both fascinated by the novel. Originally from Prespa, Macedonia, the work moved them deeply. To my mother, who lost her sight, my father would like to read the book in Macedonian, her mother tongue, the only one they use. "Is there a way to find a copy of the novel 'The Time of the Goats' in Macedonian, which I would give to my parents with the greatest joy for Christmas."

During your diplomatic career in France you met many important contemporary writers and poets. Your long-standing friendship with the philosopher and sociologist Edgar Moren is well known. How did you look at the events in the Balkans in those artistic circles then?

- The positive role of a number of French intellectuals should be emphasized, such as Gilwick, Badinter, Male, Bonfois, Gosheron, Meshonik and many others, who stood with declarations and petitions on the side of Macedonia after the Greek embargo and in other key periods for our country. . They stood on the side of independent Macedonia, at certain times and against the official policy of France, they remained consistently loyal to the friendship with Macedonia.

As a professor of French literature, you yourself have translated works by many important poets and writers. Have you managed to stay in touch with some of them to this day?

- There is a French proverb according to which the best thing in life is loyalty to friendships. I was lucky in life to experience and nurture the sincere friendship of several French greats in literature, spirituality, politics. In the first place I put the friendship with the philosopher and sociologist Edgar Moren, one of the greatest living thinkers in the world, originally from the Jews of Thessaloniki - Sephardi. On the congratulations for the happy 100th birthday, I received a nice response these days, although thousands of congratulations were sent to him from all over the world.

I also corresponded with the great French poet André Freno, then the writer and poet Robert Male, whom the President of the French Republic, Charles de Gaulle, appointed rector of the Sorbonne during the tumultuous student events of 1968, believing that he will mark a new era for the Sorbonne. That happened to her.

I would also like to mention the friendship with the senator and Minister of Justice, Robert Badinter, who has a historic role in the abolition of the death penalty in France. Badinter remains a great friend of Macedonia in establishing the international legitimacy of the independent Republic of Macedonia. Then there are the winners of the Golden Wreath of Poetry Struga, Eugene Gilwick and Yves Bonfoy. The novel "New Embassies" from the "Balkan Saga" testifies to all my French friendships.

Are there more stories to tell and in which direction would the cycle "Balkan Saga" develop further?

- Potentially the first book from the "Balkan saga" - "Fathers' books" contains all written and possibly new books. Each of these books is the fruit of many years of searching and thinking, accumulations. The truth of the Latin proverb - ars longa, vita brevis - cannot be avoided. Still, writing will follow the author for the rest of his life.

I have been obsessed with endemic isolation in the Balkans for many years. In addition to the relentless and labyrinthine Balkan, geographical relief, the Balkan man also lives in mental relief, as a syndrome of his isolation. In my many years of searching for mental "family archeology" there are certainly many more unsolved events and characters. It takes a lot of time and patience.

In the future, I would like to treat events and manifestations of a common character for all Balkans through the Balkan narrative. For example, here is the search for other common phenomena, such as borders and roads. Railways in Europe came to life very early and survived as a necessary imperative even today. In the Balkans, it comes to life with the Orient Express, which traveled from London to Constantinople. But the railway never really comes to life in the Balkans, which remain isolated. Maybe the next novel will be titled "Road" or "Railroad".