Interview with the writer Kalina Maleska: I experience Skopje mostly through people 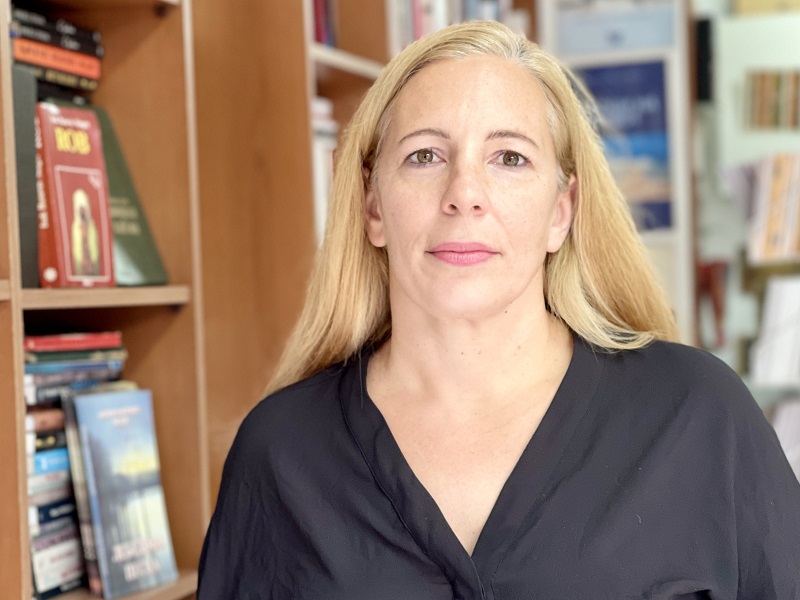 The writer Kalina Maleska recently published her new collection of short stories "Skopje in the high zone", and during the meeting with her we talked about the challenges in her teaching, analytical and literary work.

The urban sensibility of the stories placed in the collection "Skopje in the High Zone" by the writer Kalina Maleska quite naturally arises from her spontaneous and cordial character, the ability to perceive space and the different visions of time. Some of her memories are of the past and the present, but some are trying to unravel the future.

Literary criticism in short stories reveals "charming linguistic games and inventive narrative elements", and defines the collection as a kind of "Skopje prose timeline". Set in four cycles, through the stories Maleska, above all, reveals her inner world, but also gives her own interpretation of the concepts and meanings of the world around her.

Your latest collection of short stories has an unusual structure. You start with longer stories, then line them up shorter, then microfiction appears, and end with short stories in verse. How does thought shape the form in your work?

- At one time I was afraid that the collection might seem too chaotic or incoherent because of that difference in length, narrative approach, form, themes of the stories. At the same time, I wanted the collection to be exactly that. In the context of your question how thought shapes form - at times I am overwhelmed by thoughts on various topics that I want to express in different ways. Sometimes this is because it seems to me that they would be best represented in a certain form. Other times, it's a kind of narrative experiment.

As for the first reason - for example, the protagonist of "Bag of Money" hopes all her life that an extremely unpleasant situation, in which she has been since she was a child, will end, but it does not end for the rest of her life. This story seemed to me to be the most appropriate to take place in the future in order to capture that endless duration of the unpleasant situation. In "Linguistic-ideological dispute" there is a fast rhythm and repetitions, so a story in verse seemed to me to be the optimal variant. In other cases, it is an experiment to see how the language or story works in a context, such as Caspian and Bash-Celik, Online Zone Story, or some of the micro-stories.

According to the title, it seems that Skopje is in the main role of the short stories, but other toponyms also appear in the collection. What is constantly connected with Skopje are your thoughts. Why did you put it all in the "high zone"?

- Among other things, to bring to focus the problematic relationship between terms and meanings. High zones usually refer to something that is, conditionally speaking, of a higher standard. But the specific story "The Legend of the High Zone", from which the title of the collection is derived, refers to something opposite, the floors in the buildings above the third floor, where at one time there was often no water. In this case the low zone is more desirable than the high zone. Hence, the title is also ironic, and the irony is the difference between the supposed meaning of the term and what it actually means. Because in most stories there is such a discrepancy between words and meanings, and between events and the interpretation of those events, the title is appropriate for the whole collection.

What is your personal attitude towards Skopje? How do you feel about his transformation, especially visible in the last ten years?

- Some of the transformations of Skopje in the last ten years are foreign to me - ideological, aesthetic and in terms of information on possible financial fraud. Two or three years ago I read texts about transformations of public space in several cities around the world and those ideas seemed great and applicable to Skopje as well. I want to say that I have some idea of ​​how Skopje could be transformed, but since I am not an urban planning expert, I will keep it to myself. Otherwise, I experience Skopje mostly through people, not through appearance, so that, from that aspect, I would not live in any other city.

Your work so far contains four collections of short stories, two novels, one play, a children's book and literary studies. What is your closest or dearest writing genre?

- Everything is interesting for me to write. When I finish a book, then I want to write the next one in another genre. I have even often thought of trying to write a few stories so differently in every way that it would seem as if they were written by different people. I have not succeeded so far, I think.

Your specialty in teaching is utopian / dystopian literature. How much does such a choice of subject have an impact on your personal work?

- It is difficult to write about the future because the changes are extremely unpredictable and depend on a million (literally, probably even more than a million) factors, so that good utopian and dystopian books are, in fact, very rare. More often than not, books and films of this genre have stereotypical characters, resistance to progress, and over-expressed didactics. For these reasons, in the short stories in the section "Skopje: Futures" I deliberately avoid the conventions of utopian / dystopian literature - in that sense, the choice of subject has an impact on my work. In other words, I would not say that the stories in this section are dystopian, although they do have some dystopian elements, I have placed them in the near future, but it serves to enable some situations and ideas to be explored more than to predict the future.

In the comparative study "Forms of power in contemporary literature" you analyze the impact of socio-political reality on the structure of literary works of several specific authors. What is your conclusion, does reality affect literature, or, perhaps, when it comes to fiction, there can be no limits?

- Not only does reality affect literature, but I do not see why literature would like to escape from reality. While researching this study, I found that literary theory and criticism are dominated by the thesis that literature is, in a way, above reality or over current socio-political developments, and that there are literary works that have lasting values. This is strange because if you analyze works from different periods of literary history, everything will show you that literature is deeply related to reality, that both reality influences literature, and literature influences reality, and that there are no lasting values.

There is a very famous song by Kipling, which is called "If". In short, in it the poet expresses how a person should behave when faced with various challenges: not to hate if hated, to be restrained if blamed, not to complain about losses, and so on. The intention is to be an expression of a kind of Victorian stoicism, and at the same time, and without the intention of the author, it indicates an entire ideology, according to which there is only one correct way of behaving. The song, according to many critical reviews written to date, has lasting values. On the other hand, we do not all have to agree with that because promoting just one behavior, for example, is very problematic. I think it is okay for any literary work, no matter how recognized, to be problematized, with analysis and arguments. There are literary works that have played a significant role in certain historical circumstances and it makes sense for me to analyze them in that context. All literary works are influenced by reality and are its expression, which is great, otherwise it would probably be meaningless.

One of the analyzed works in the study is "What was heaven" by Vlado Maleski. From a critical point of view, there is nothing controversial to analyze the work, but if it is about your grandfather, the question arises with what purpose did you re-read the work of your grandfather?

- You imagined me. I would say that I did not have a goal that was different from the goal of re-reading the other works that are analyzed in "Forms of Power in Contemporary Literature". I read it for a while before I started working on the study and when I started writing, I realized that it would be great for analyzing power, above all, through the characters of Denko and Naum, who are on opposite sides in terms of having or not having power, which depends on personal characteristics, manner of speaking, closeness to other people and organizations and many other factors. I think or, here, I hope, that in the analysis I approached the novel just like the other novels.

Your grandfather is the author of the verses of the Macedonian anthem, your father is a famous diplomat and political columnist. Do you feel a shadow of the greatness of their personalities, or perhaps you have chosen your safe zone in literature?

What will be your next literary challenge?

- When I finished this collection, at some point and in parallel while working on it, I was writing a poem for children - "The Alien Lu-Ru-Su". This book is finished, the illustrations are by Natalia Lukomska, and it is currently in print, and its release is scheduled to be published on December 7. It develops around two intertwined stories: the possibilities of life in space and what they depend on, as well as the theme of peer intolerance towards a girl who jumps from the middle. 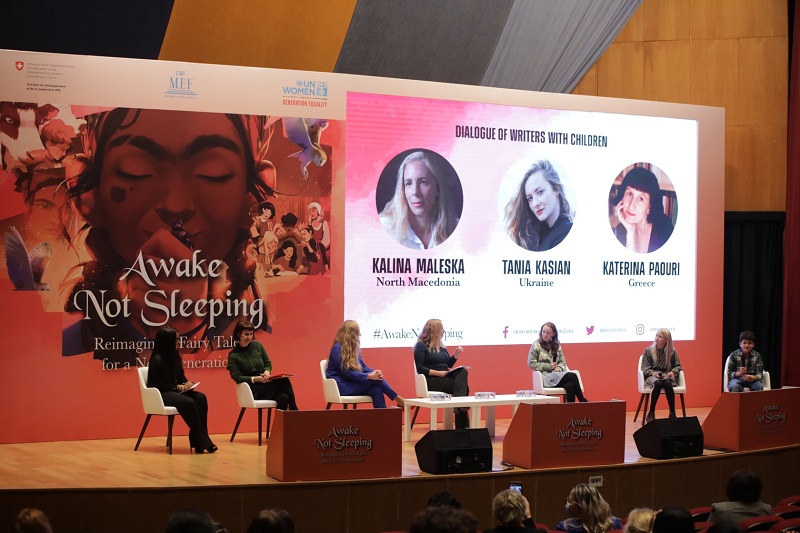 Promotion in Istanbul - Rethinking fairy tales for the new generations

The short stories "The child without golden hair" and "The room with formulas on the wall", which were published in Macedonian in the collection "Skopje in the high zone" (Ili-Ili, 2021) by Kalina Maleska, are also published in English in the international collection stories "Awake, not asleep: Rethinking fairy tales for new generations". The collection consists of 28 stories by authors from 25 countries in Europe and Central Asia, and was promoted on November 18 at the MEF International School in Istanbul, Turkey. Besides the Macedonian author Kalina Maleska, the editors of the collection are Angela Hunter Walsh, Donna Joe Napoli and Nadia Albert.

The publication of the collection is a result of the initiative of the UN Regional Office for Women (Europe and Central Asia) in Istanbul, which started in September 2020 and included a series of workshops and an invitation to write short stories, which would rethink existing fairy tales and stories or be authorial stories. with elements of fairy tales, in which more than fifty authors participated. One of the ideas in the collection is to encourage reflection and change in the way societies perceive the role of women and girls.

Art and ecology: Along with art against the devastation of the public good

Conversation with Dr. Jehona Spahiu Jancevska: The impressive painting in the church of St. Nikola Toplicki as a research challenge

The book "More music, more conversations" by Nenad Georgievski is a kaleidoscope of stories and people