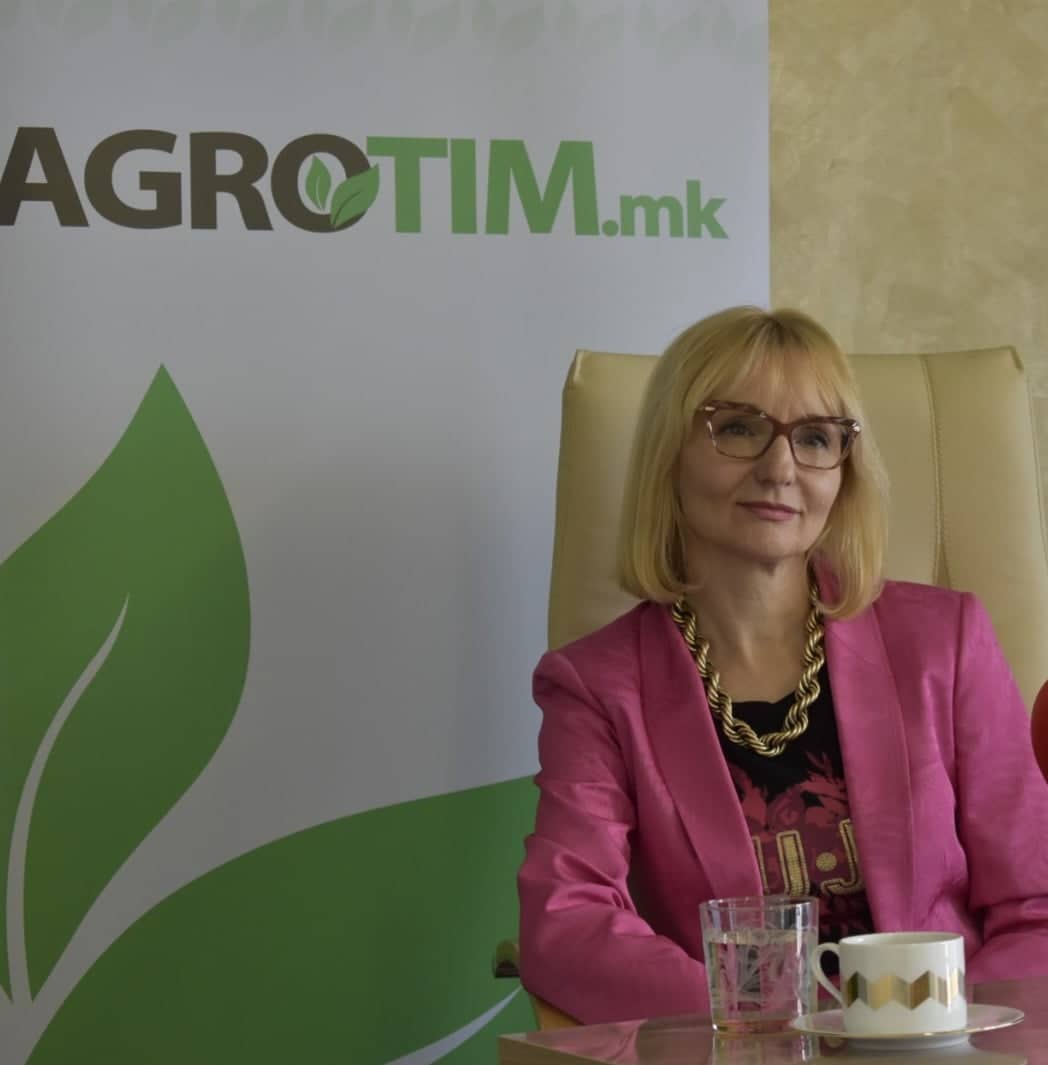 We need to turn to the domestic production of sunflower and provide raw material that will be reliable for the processor, there will be no outflow of foreign currency, and farmers will be satisfied with their earnings. This year, the purchase of 10.000 tons of sunflower is expected, but the capacity of "Crystal 1923" is 40.000 tons.

Contractual production is the best solution for all stakeholders in the process - before sowing or planting, the farmers know to whom they will sell the crop, the buyers have secured a reliable raw material, and the state has solved the problem with the placement of agricultural products, says Lenče Nikolovska, who with her "Agrotim" company has already become recognizable in mediation between farmers, producers and buyers.

Nikolovska has been focused on the agricultural sector for many years, starting from a journalist who follows the situation, through a member of parliament, then an advisor for agriculture to the former prime minister Zoran Zaev, to now have her own company, which offers various services to farmers. Her assessment is that now, when the pandemic and the Russian-Ukrainian conflict emphasized how important domestic production is, the EU will invest billions in the agricultural sector, and in the national economies, more and more opportunities will open for agriculture to be a valued and paid profession.

Where are we with the process of contract production, for which crops is it the most, and where is it necessary to establish it?

- It is about a whole system and a complex process of ideas, agreements, meetings, negotiations, in order to reach a common acceptable solution for both parties - producers and buyers. In this process run by "Agroteam", we have a big role and support from the Ministry of Agriculture, by increasing the subsidies for those crops that are part of the contracted production, as well as the institutional security that is offered in the interest of increased domestic food production. In one sentence, it has already become clear to everyone that contract manufacturing is a successful model that should be pushed for more crops. Currently, through "Agroteam" we are working on the contract production of organic pepper, together with the Swiss Project for increasing market employability - IME, we continued with the contract for sunflower, we had for gherkins, for corn, and now we are preparing for a new project - contract production of oil yielding beet. From my experience and knowledge, there is an opportunity to organize contract production for all crops that are raw material for the processing industry, and a step forward can be contract production with traders and buyers as well.

For many years, the edible oil factory "Crystal 1923" from Veles has been inviting farmers to a cooperative relationship, to plant sunflowers with a guaranteed price and purchase. But although there is an increase in the quantities, the capacity is not even close to being fulfilled. Why does that process go so slowly in our country - there is no math, enough farmers, trust or something completely different?

- The whole story of the activation of contract production began with the return of sunflowers to the Macedonian fields, a project that together with the director of "Crystal 1923", Goran Lazov and a team of farmers and experts, we started 4 years ago, while I was working in the Cabinet of the former Prime Minister Zoran Zaev. And we managed to triple the production in 2 years, from 2.000 tons, as much as the combine bought, to 7.000 tons of sunflower. But it is certainly far from our possibilities as a domestic production and from the capacity of "Crystal 1923" of 40.000 tons. That is why this year the intensive campaign of the Ministry of Agriculture, the increased subsidies, the support in the procurement of fertilizer and the reliability of contract production, made the agricultural producers to sow larger areas under sunflower. According to all the announcements, this year we expect over 10.000 tons, which is excellent and motivating for the following years to continue this positive trend. Here I think the decisive factor will be the purchase price of sunflower, which is expected to be high this year, due to the war with Ukraine and the unstable sunflower market, and this is not a problem that will be solved quickly and easily. That's why we should turn to the domestic production of sunflower and provide a raw material that will be reliable for the processor, there will be no outflow of foreign currency, and the farmers will be satisfied with their earnings.

Are there any attempts on our fields to bring back the old crops, such as cotton, poppy, oilseed rape?

- Forgotten crops were "forgotten" mostly due to the unprofitability of production, spontaneous placement, cheaper raw materials from imports and the lack of organized purchase, i.e. contract production. That's how we lost sugar beet, from 6.000 hectares, now there isn't even a single acre, due to the non-operation of the Sugar Factory in Bitola. And entire villages lived from that production, the beets were bought, and the green part was used as animal feed in the farms. For cotton – the story is the same, lack of purchase, lack of interest of the state to stimulate this production. What I want to announce now is the contractual production of oil-yielding beet, for which there are soil and climatic conditions, and again we are negotiating with "Crystal" to buy the beet. The only problem will be the placement of the pomace, which will appear as a by-product of the beet processing into oil, for which we need to negotiate with the cow farms and offer them for purchase. Experts say that it is an excellent solution because it increases the milk yield of cows, and we want to inform farmers about this through "Agroteam". These days we negotiate with companies that deal with the sale of seeds, to provide quality seeds and varieties that suit our climate and advisers who will monitor the production in the field. Here, too, I expect support from the Ministry of Agriculture in the direction of encouraging farmers or the possibility of increasing subsidies as an additional motive. We will see how the whole process will take place, which must be fast, because the sowing of oilseed rape is in August and September, and so far we have already announced the sowing of 500 hectares.

Whatever policies are pursued, the central figure is the working hand. How to attract new farmers?

- The labor problem is evident and increasingly worrying in recent years. The problem was created continuously without the possibility of stopping or reducing it for several (known) reasons in society in the past years. I want to believe that this trend will turn in favor of agricultural production because the covid-crisis and the war in Ukraine showed us that the only reliable business is food production. The figures, not only in our country, in all countries show an increase in exports, high prices of agricultural products, processing and the need for food. All serious countries reacted to this situation in an identical way - they increased subsidies for farmers, the EU increased support funds, intervention measures were introduced, land was allocated, the state turned to increased production of strategic crops. Here I encourage young and ambitious people to get involved in the agricultural sector, there will be more and more need for food, the EU will invest billions in the agricultural sector, modernize, digitize production and agricultural production will be a respectable and well-paid profession. We have excellent state measures, there are also the IPARD funds, this year alone there will be calls for 35 million euros. All that will contribute to agricultural production being a profitable business. And profit knows how to motivate, if one has managerial skills and vision, here is a sure thing for young people to stay in the country and justify the epithet - agrarian Macedonia.

Mališić: Bread prices had to increase, we have new gas and electricity prices

The basic interest rate remains at the level of 2,5 percent

Updated the application "MyDDV" on Playstore for scanning fiscal receipts