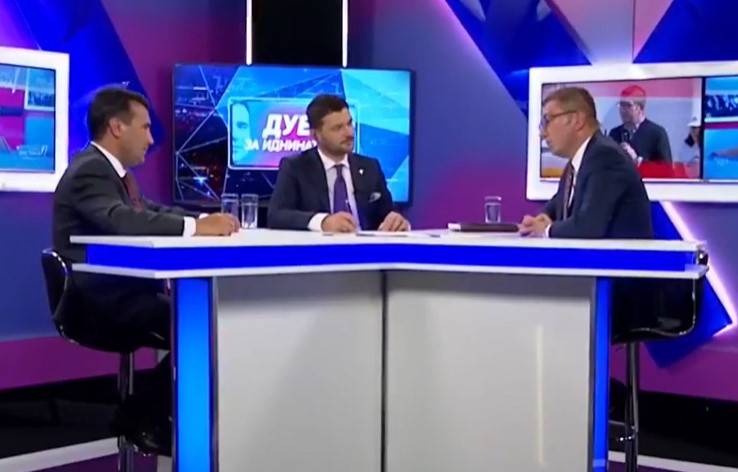 Both the Prime Minister Zoran Zaev and the leader of VMRO-DPMNE Hristijan Mickoski in tonight's guest appearance on Kanal 5 television, expressed confidence that their coalitions will lead to a convincing victory in the upcoming local elections on October 17.

"The result of the elections will really determine the path the country will take, because the municipalities are very important, and they will be even more important, because the next phase of decentralization follows, the transfer of new competencies and institutions." In such a coalition that we have on our side, which is a winning coalition, which works for the future, on the other hand we have a coalition that we called political marriage, which will experience divorce because it is not natural, because it has opposing views on the biggest issues in the country… everyone knows that this coalition is unnatural, that it was made for political purposes, ie to make maximum efforts to make the fulfillment of the desire to be a government as certain as possible. "We will win the mayoral seats, in total number, we will win in the total number of council seats in the country, and in the total number of votes in the country and we will win the city of Skopje." said Zaev.

"I would say two thirds of the citizens in certain municipalities, including the city of Skopje, are dissatisfied with the current mayors of SDSM and for the most part those same mayors are repeated. I would say I do not see new faces in those who become mayors for the first time, we have such a transitional politician as the one in Prilep, we also have a politician in Strumica, we have a former director of a Skopje public company, for whom we see that he was stuck in crime , and not a candidate for mayor for a Skopje municipality. The citizens will recognize that in the next local elections and will see how it really works, so maybe I would not be surprised if Zoran Zaev himself votes for VMRO-DPMNE in four years, because we will show that not everyone is the same, in this country has people who love their country ", replied Mickoski, who added that the coalition between VMRO-DPMNE and the Alliance for Albanians and Alternative" is not a political marriage, but it is an anti-corruption coalition that should continue to lead the Government in "Macedonia and that Government still have to seriously clean up the crime and corruption that has been happening for the past four years." he said.

"Remember what I am saying, the coalition against corruption of VMRO-DPMNE and the coalition with the Alliance for Albanians and Alternative will defeat you and everyone else, because you are stuck in crime, Mr. Zaev," added the leader of VMRO-DPMNE.