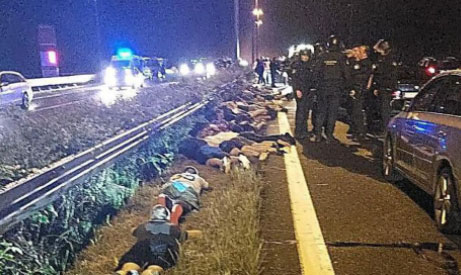 In the clash between the Croatian police and the fans of the football club "Hajduk" from Split, 15 fans and 20 policemen were wounded or injured last night, but no one is in danger, the Zagreb police announced today.

Police today told reporters in Zagreb the details of the incident that happened last night, when several hundred fans from the next column suddenly stopped on the A1 highway near the resort Desinec between Zagreb and Karlovac.

They attacked the 16 police officers who were there, with batons, bottles, chains, stones, fire extinguishers, chairs, and threw a burning torch near the gas station.

Deputy Director General of Police Damir Baric said there were no indications there would be an attack and suggested there could have been a fire and an explosion at a petrol station.

At today's press conference, it was pointed out that the police officers used firearms because their lives were endangered, but also the lives of the people who were at the gas station.

According to the new data, two more attackers have gunshot wounds, and later they asked for help in the Split hospital, but the wounds are not severe.

43 assailants were arrested, including a juvenile and 11 young adults.

The incident happened after the derby between the football club "Dinamo" from Zagreb and "Hajduk" from Split.

Ahead of the Pride Parade, anti-LGBT protest in Sarajevo

Vuќi:: I am full of EU games, that is why "Open Balkans" is important and we supported our friends

Rama again sharp towards the EU: Candidate status is a kind of pill against depression

Erdogan says the death penalty should be considered in Turkey