A heartbreaking Hollywood story: Life has not given him good cards, but his courage and optimism are an inspiration! 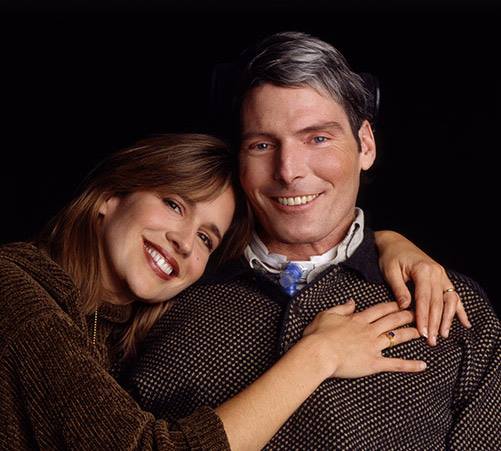 He will forever be remembered as Superman, but many do not know that he was actually in his private life…

Actor Christopher Reeve, who is best remembered for his role as journalist Clark Kent, who turns into the superhero Superman, was unlucky in real life. His fate is poignant, but at the same time it is an inspiring story of will, strength and courage.

“My goal was never to stand, it was to help shape research so that we could all get out of these chairs. But, at my…

Reeve was already famous when he met Dana Laye in a cabaret, with whom he fell in love at first sight. The couple got married in 1992, but the accident soon knocked on their door…

Christopher Reeve and wife Dana, 1993 at the launch of Planet Hollywood London.

The famous actor had a terrible accident in 1995 when he fell from a horse and suffered a severe head injury, which left him paralyzed from the neck down. His wife was constantly by her injured husband's side, helping him in a recovery that was painstaking and uncertain.

Published by The Marriage on the fact Wednesday 10 November 2010

Despite the fact that he ended up in a wheelchair and with numerous accompanying health complications, the famous actor did not give up on life. On the contrary, he made incredible health advances that doctors could not have foreseen even in the craziest of scenarios, he was actively involved in public speaking and counseling, and his motivational speeches became known all over the world. Reeve appeared everywhere smiling and full of enthusiasm, and his beloved wife never left him.

“As a caregiver, you want to be as well informed as you possibly can be, and I think the first thing - the first most…

However, his complex condition had complications, so a few years later, due to an infection that developed, he received an antibiotic that caused him to fall into a coma, and shortly afterwards in March 2004, he died of a heart attack. The news of the death of the famous actor and great fighter shook the world, but the tragedy does not end here - just one year after Reeve's death, Dana was diagnosed with an incurable form of lung cancer and she died in March 2006.

Christopher and his wife Dana. Both gone, but never ever forgotten.

Published by Christopher Reeve: The Real Superman on the fact Sunday 12 February 2017

Christopher and Dana Reeve founded a foundation that bears his name and is dedicated to innovative research and solutions for treating spinal cord injuries, as well as improving the living conditions of people with this type of injury.

Having a wonderful day, what about everyone else? The oscars! #oscars (: [#openrp #singlerp #followme #roleplay #superman]

Christopher Reeve will be remembered, not for the tragic accident that happened to him and his wife, but for the struggle, enthusiasm and strength that did not leave him until his last breath. And of course, like the undisputed Superman - the man of steel!

1920s in Paris, Berlin and Odessa: Digitally Restored Movies in the Jazz Age