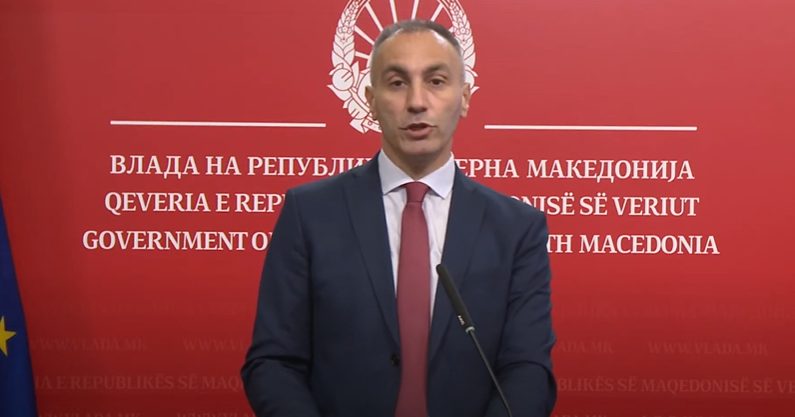 The hot chestnut - the French proposal, the Government will elegantly leave to the Parliament to decide whether it will accept the negotiation framework for the start of Macedonia's negotiations with the EU. First Deputy Prime Minister Artan Grubi stated that the Government will forward the French proposal, the bilateral agreement and other documents to the Parliament today.

- In Bulgaria, there is no government with which we can agree, negotiate and decide because the government has resigned, there is a new mandate holder who is trying to form a parliamentary majority and elect a new government. The protocol has not been signed, it has been harmonized for a long time, after the Good Neighbor Agreement of 2017 was signed, and we, as the ruling majority, believe that all documents submitted by Brussels and all bilateral documents that are harmonized with Sofia should be submitted to the Assembly, where the parliamentary parties should open a constructive dialogue and decide on all those documents and oblige the Government with conclusions about the information they will receive, to act. The conclusions will prohibit this and any government from making any decision or negotiating on any basis for the historical, linguistic, cultural peculiarities of the Macedonian people as well as other communities in Macedonia, Grubi said.

When asked when the Government will submit the French proposal to the Parliament, Grubi says:

When asked whether the Government will send the documents to the Parliament without the comments from the opposition, since the opposition VMRO-DPMNE submitted their comments to the working group yesterday, Grubi says that arguments from all sides, from political parties, the international community, non-governmental organizations will have to be cross-referenced. organizations and from the expert public.

- This Government decided as the citizens demanded and will decide in the end, as the citizens demand, because the Prime Minister in Brussels also said that, he said "no" to the first French proposal and during the second proposal he said that we will open a broad social debate. We have not opened such a wide debate on any issue. Consultations continue. This is not an issue that we need to solve now, immediately, urgently, because we need to harmonize it all together. It is about the future of the country. It is important for citizens to know that this is a battle between those who want European Macedonia and those who want Russian Macedonia. And period - says Grubi.

- We will see, it is a process of dialogue between the parties. We all have to be realistic about what we can and cannot change, but we know what we can do. And we don't have any dilemmas like the opposition has. We are very sure, we know that the Macedonians will not assimilate, because they did not assimilate in the 21st century. I believe that the statements of the leaders of the opposition insult exactly you, the citizens, those who are protesting because they say that you are so insecure in your identity that you will be assimilated by the Bulgarian in 2022. In what way will the Bulgarian assimilate you, say that you are Bulgarian? That you speak Bulgarian and you will accept that? Never. You have not accepted the 21st century and you will not accept it today in this developed world. This is an absolute insult to the Macedonian people by the Macedonian opposition. I am much more convinced of the identity of my fellow Macedonians than the opposition and I know that under no circumstances will anyone accept changes, dictates and assimilating and non-existent agendas - says Grubi.