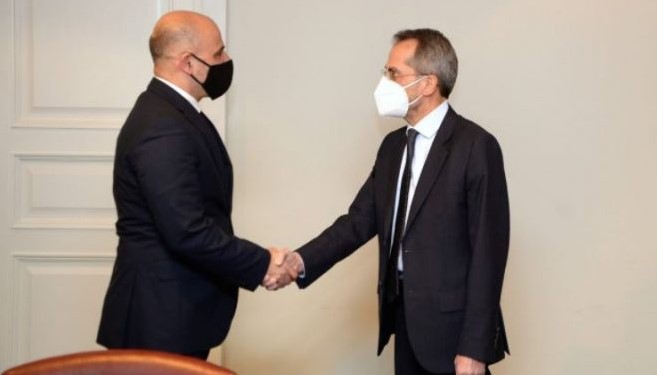 The Prime Minister Dimitar Kovacevski met today with the Greek Ambassador to the country Roussos Kundouros, who conveyed strong and unequivocal support from Greece and the Prime Minister Kyriakos Mitsotakis for the start of negotiations between the Republic of Northern Macedonia and the EU as soon as possible.

According to the government press service, the meeting congratulated the election of Prime Minister Kovacevski and the new government and concluded that there are conditions for further improvement of relations between the two countries, in the field of energy and economy, as well as in all other areas. important for the citizens.

Both interlocutors assessed that the European integration of the Western Balkans is a contribution to regional stability, an opportunity for implementation of European standards in the countries, and thus the development of the region, which is seen as a benefit for all.

Prime Minister Kovacevski thanked Ambassador Kundouros for the support of the Greek Prime Minister and Greece for the country's progress in European integration, following NATO membership.

- The resolution of political issues between Northern Macedonia and Greece with the Prespa Agreement, opened space for the development of economic relations. As a country, we participate in the Alexandropolis energy project, trade with Greece is good and these are just some indicators that relations between the countries are moving in a positive direction and in that direction we continue the cooperation, said Prime Minister Kovacevski.

At the meeting, as stated in the statement, other current issues of importance for both countries were discussed.

City fathers will learn from the European, at the Forum of Mayors to be held on June XNUMX