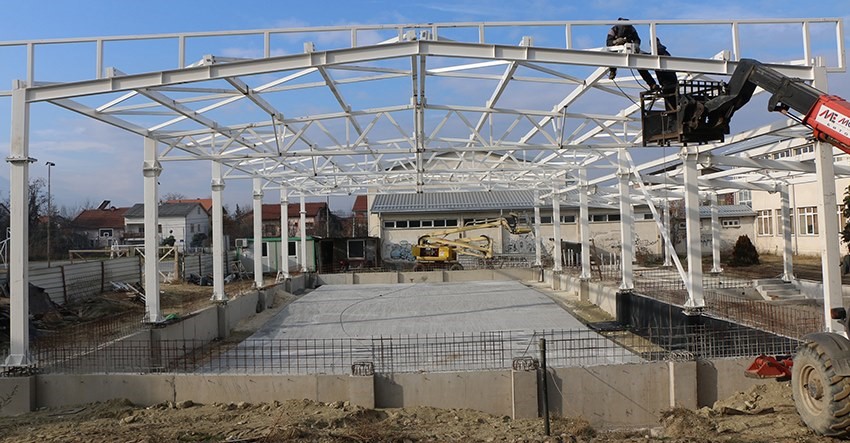 The indoor swimming pool in the primary school "Dimitar Pop Georgiev Berovski" started to be built in February 2020, as one of the six swimming pools of this type built by the Agency for Youth and Sports in cooperation with local governments, and according to the latest information, the final works have been stopped. from his performance.

The first indoor pool which began to be built in the municipality Gorche Petrov more than two years ago everything not finished yet, although the project closure deadline was 18 months. According to the latest information, the final works of his performance have been stopped.

Parents to students who study in primary schools in this municipality, ask what is happening and how far it is realization of the announced project.

- The pool should have been ready at the end of last year, at least that's how they bragged. In the morning it would be intended for primary school students, and in the afternoon there would be swimming clubs. And how far is the pool, now no one says or mentions anything. I have two children that I want to enroll in swimming and now I have to take them to SC "Boris Trajkovski". We waited, we hoped, but as things stand, it seems we will wait a long time - reacts Kristina from Gjorce Petrov.

The indoor swimming pool in the primary school "Dimitar Pop Georgiev Berovski" started to be built in February 2020, as one of the six indoor swimming pools built by the Agency for Youth and Sports in cooperation with local governments. The initial announcement for opening the pool was for November last year, at least that is what the director of the Agency Naumce Mojsovski announced, who together with the ex-mayor of the municipality Gjorce Petrov a year ago inspected the construction works of the pool.

Mojsovski said that the pandemic slowed down the pace of work, but that things will continue more intensely again.

- By the end of October or the beginning of November the pool will be completed. With these dimensions of the pool, I hope we will form a swimming club in the municipality of Gjorce Petrov. It will be better for more children from the schools to use it - said the director of AMC at that time.

Now, from The Agency for Youth and Sports has no answer to the questions to what extent is the realization of the construction of the indoor pool and when it will open its doors to students and recreationists from the municipality.

From the Municipality Gorche Petrov also for more detailed information about the performance dynamics in the following period, refer to the AMC.

- So far, the closed carbine phase has been performed, and the machine part has not been realized. Concrete walls, drainage and supply installations have not been constructed. Practically, the finishing touches are stopped. According to the latest information, the equipment has been ordered, but it has not been received yet - they share the information they have with the municipality.

The sports facility that is being built has dimensions of 20,40 × 30,35 meters and a depth of 0,9 to 1,4 meters. According to the project, the pool is planned to have changing rooms and a central heating system. It is planned to be by all standards and to be energy efficient and cost effective.

The construction of the pool is worth 38 million denars.

Due to a protest of SSM tomorrow, a special traffic regime in Skopje

MoI: Driving in Skopje is too fast

No water today part of Dracevo

The homeless in Skopje in the face of high temperatures, professional teams will provide health care

There is no cable car or buses to Vodno from today, partial ban on movement in the forests introduced