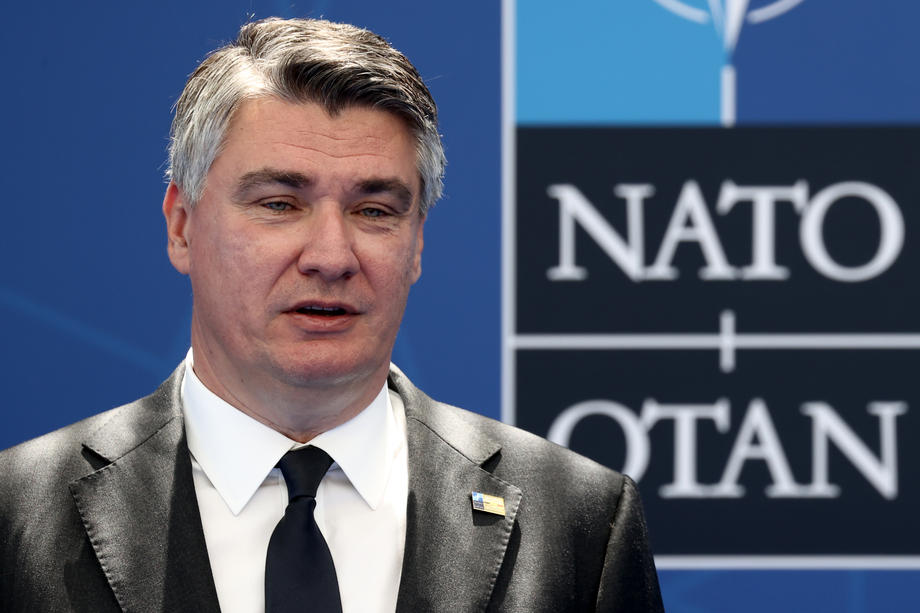 The German media attracted a lot of attention this week President Zoran Milanovi. with which he announced that the Republic of Croatia will withdraw all its troops from the NATO contingent in Eastern Europe in case of escalation of the situation, writes Deutsche Welle.

The DPA agency conveyed Milanovic's key statements - such as that in the current conflict, Russia's security interests should be taken into account, ie Milanovic's assessment that Ukraine is one of the most corrupt countries. DPA reported that Croatian Prime Minister Andrej Plenkovi. He apologized to the Ukrainians for the president's statement, adding that Croatia was a reliable partner in the European Union and NATO and would honor its commitments.

A news release from the agency said Milanovic was increasingly profiled as "populist", describing him as a stubborn president who has emerged as a critic of the Korona measures, a supporter of nationalist Croats in Bosnia and Herzegovina and excuses. "for the brutal treatment of refugees by Croatian police."

"Zagreb and the West"

Unanimity in the Croatian state leadership on current security issues is the subject of an article in today's issue of the Frankfurter Allgemeine Zeitung (FAZ). Under the headline "Zagreb and the West", the daily notes that Milanovic's statements about the withdrawal of Croatian troops "to the last" have attracted much attention in Russia and NATO member states "and because they can be understood as Croatia's withdrawal from the Organization in general. of the North Atlantic Treaty. "

FAZ emphasizes that the President of Croatia can not make such a decision alone, reminds that Croatia is not a military power, but also notes that the political signal from such statements, especially these days, suits Moscow very well.

Those statements in the media met with contradictory reactions, writes FAZ. Jutarnji List reportedly called the Croatian president "the star of the Russian media loyal to the Kremlin", but also conveyed the assessment of the Russian RT, which writes "Finally a reasonable European leader" and believes that Milanovic only says what many in the European Union say. they think but so far they have not dared to speak in public.

Milanovic's statements are contrary to the line of the Croatian government, writes FAZ. Foreign Minister Gordan Grlic Radman In a statement to the newspaper, he stressed that the president is not speaking on behalf of Croatia, but on his own behalf, and stressed that Croatia is a loyal member of NATO.

The German newspaper also writes about the "sarcastic" reaction of Prime Minister Plenkovi,, who said that Milanovi. May have been given too much candy during his visit to the chocolate factory (Krash) and that he said that "in a sugar attack".

The rhetorical confrontation between the president and the head of the government is nothing new in Croatia, reminds FAZ and writes that not a week goes by without the two hanging out. According to the German newspaper, Milanovic is a "formal Social Democrat", but he regularly draws attention to statements "which in Germany could be called right-wing populist or even radical right-wing".

Clashes between Milanovic and Plenkovic

As long as Plenkovic is at the head of the government, Milanovic's foreign policy expeditions will not pass without contradictions in Croatia, FAZ believes. But at the end of the article, he notes: "It is also true that Milanovic is the most popular politician in the country. "It may be more accurate to say that he is the least popular."

All in all, FAZ concludes, Croatia remains a country whose inhabitants are oriented towards the West. The daily cites the results of a recent Eurobarometer survey in which 70% of respondents in Croatia answered "yes, fully" or "yes, partially" to the question whether they feel like citizens of the European Union. Regarding NATO, the picture is not so clear, writes FAZ: 44% of respondents in Croatia have confidence in NATO, and 47% distrust.

"Milanovic's statements with a part of the population are probably on fertile ground. "And he may have calculated with his statements," concludes FAZ.