Georgievski at the reception in AMC: I hope that in Paris 2024 we will have more representatives and greater success 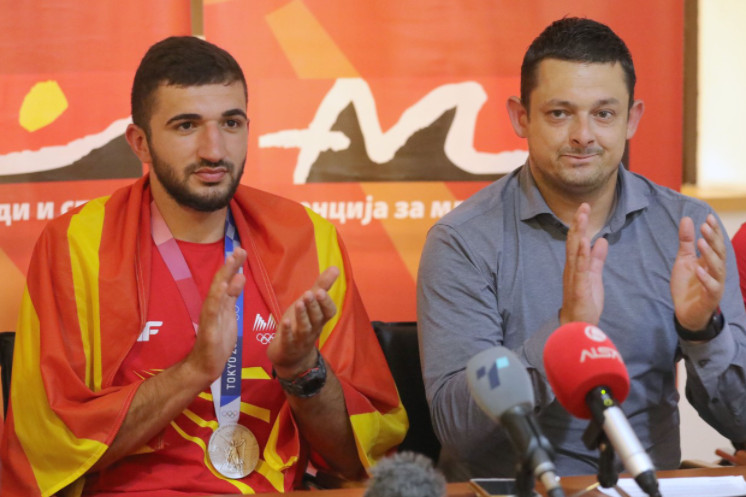 Dejan Georgievski returned to Macedonia today after achieving the greatest success since independence at the Tokyo Olympics, winning the silver medal in taekwondo.
As befits the sports hero of Macedonia, Georgievski was solemnly welcomed at the Skopje airport, after which he was admitted to the Agency for Youth and Sports (AMS).

- Thanks to AMC and to all the people in Macedonia. I did not use social networks during the matches, but my team told me what was happening in Macedonia, about the euphoria. I hope that in Paris 2024 we will have more representatives and greater success. I wish a lot of success to the other Macedonian representatives in Tokyo - said Georgievski at the press conference in the AMC.

The director of AMC Naumce Mojsoski who welcomed the sports hero at the airport, handed him a special picture with the silver trophy in the premises of the AMC as a thank you for the historical success, and promised that the state will pay much more attention to martial arts.

- Georgievski made us all proud, he won several favorites in one day in just a few hours. I am honored that Macedonia in Tokyo had a highly motivated sports delegation that did its best. I want to congratulate him and wish him more success. He won silver, but Dejan's medal is gold for us. The AMC will continue to support him with the same motivation. My commitment is for all martial arts to have their own homes, we know the problems and I hope that while I am, a solution will be found, it is about gyms that are not oversized. We have already made a decision to purchase tatami mats, all the necessary props. My suggestion is that the small halls like Partizan that are being reconstructed be used for these martial arts - said Mojsoski.

They also thanked for the support they receive from AMC the coaches of the silver medalist, Darko and Borce Kostovski who stated that is a dream to build an Olympic taekwondo center and that Macedonia has such talents that can bring gold at the next Olympics.

- Our dream is to have an Olympic center only for taekwondo and construction will start very soon. I do not want to underestimate any sport, but at the moment taekwondo is a leading sport and I hope that with us the necessary infrastructure will start to be built, not for anything else, but for many medals at the next Olympics. Vladislav Larin is Cristiano Ronaldo in the taekwondo, and next to him is Dejan Georgievski, because in the final, believe me, nuances decided. It is a wonderful feeling to eliminate a world champion, then a very strong African fighter, especially a Korean, because that country is the cradle of this sport, which is like beating Brazil or England in football. In Paris, with God we will bring forward gold, and maybe more medals, why Dejan's sister, Anamaria is a junior world champion, his brother is a Balkan champion, there are several other great talents. We have a serious generation that needs to be followed and that can go to the heights of Olympism - rsaid Darko Kostovski.

VIDEO: The construction of a reception center for foreigners in Bardovci again took the residents out on the street, the arguments of the Ministry of Interior for the building are different