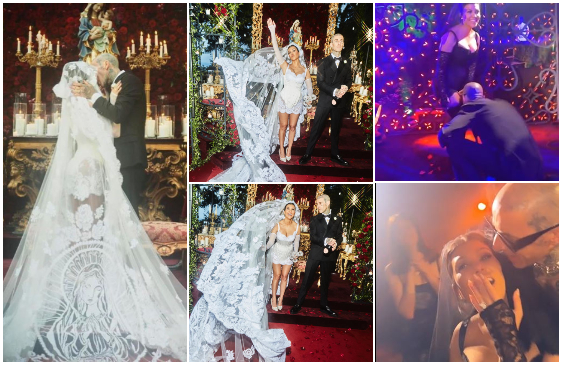 One week after they were legally married in Santa Barbara, Courtney Kardashian and Travis Barker at the third and most lavish wedding ceremony they said yes to Castello Brown Castle in Portofino, Italy.

At the designed spectacle, the bride wears a mini dress by Dolce and Gabbana with a huge veil embroidered with the icon of the Mother of God that Travis has tattooed on her skull.

Complete the look with glamorous make-up and manicure in a shade of baby pink. The groom looked equally dazzling in a black suit from the same Italian luxury fashion house.

Among the guests were the entire Kardashian-Jenner family, ie Courtney's brother and sisters, as well as her children, Mason, Penelope and son Raine. Their father Scott Disick was not present, because he allegedly did not receive an invitation, reports Page Six. Barker, meanwhile, had son Landon, daughter Alabama and stepdaughter Atiana De La Hoya by his side for the big day.

The newlyweds originally "got married" in a fake wedding in Las Vegas in April. After the internet was flooded with their spontaneous wedding, the couple confirmed that the ceremony was just for fun, as they did not get permission to marry.

Courtney Kardashian and Travis Barker got married in secret: Marriage is not legal

The couple then legally married in downtown Santa Barbara, California, on May 15. Courtney's grandmother, Mary Joe Campbell, and Travis's father, Randy Barker, were present at the wedding as witnesses.