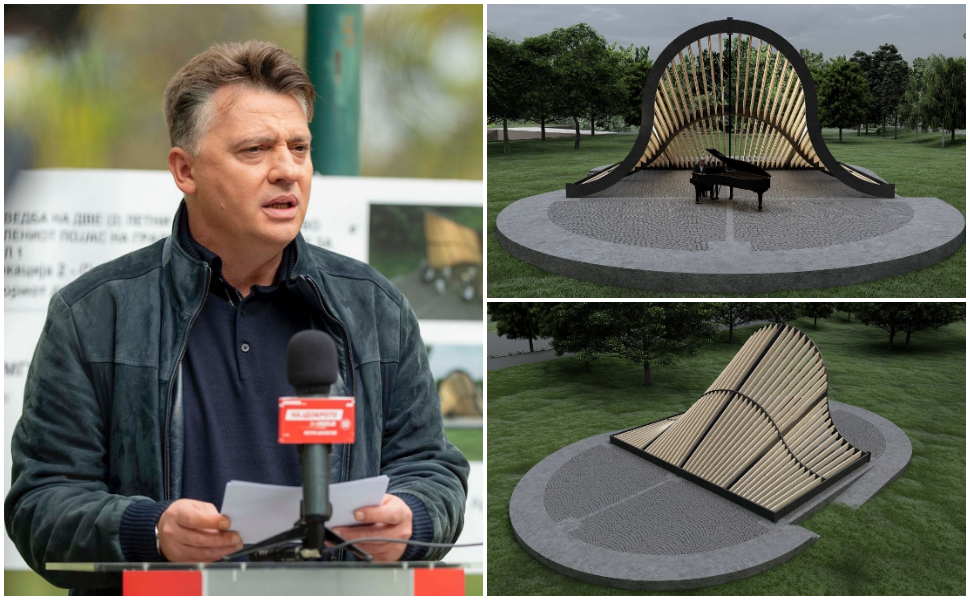 In the City Park today, the City of Skopje set up the first of three summer scenes intended for holding cultural events outdoors. It is a montage and multifunctional outdoor stage, with moving steel profiles, ideal for holding music events, exhibitions, theater performances, art performances and various other gatherings.

At the opening, the current and candidate for mayor of the City of Skopje from SDSM, Petre Shilegov said that the multifunctional stage will be the new pride of the City Park.

The past two years spent with the pandemic of covid-19, Shilegov emphasized, made the citizens spend more time for rest and recreation in the open, and one of the favorite places of Skopje is the City Park.

- We started this process immediately after the pandemic started. The city of Skopje was the first European metropolis with crisis measures for culture in order to protect the existence of Skopje artists, but also the first metropolis that organized entire festivals amid a pandemic and even quarantine. This scene was selected in a public competition in competition with 12 other works and was presented at an exhibition along with all other received works last summer. After the preparation of the basic project and the necessary public procurement procedures, the stage is here, added Shilegov.

- Let's unite for a modern city that invests in the future, not in the past. "Let's support Skopje, which supports young people to build families here and which strongly invests in a healthy future, clean air and modern infrastructure," Shilegov concluded at today's press conference, calling for unification because Skopje must not stop growing and continued its journey among the most developed cities in Europe.

When asked by a journalist that Arsovska refuses to participate in a debate with him, Shilegov said that the people of Skopje owe it to them to face the concepts of city development.

- I am sorry that he underestimates our citizens. I really do not know if anything was said badly at all, on the contrary we talked about black campaigns and he did not want to talk about it. We owe the debate not to me, but to the citizens of Skopje. We owe it to the citizens of Skopje to face the concepts of city development. It's irrelevant how any of us feel. This city does not belong to either VMRO or SDSM, this city belongs neither to the candidates for mayors nor to the current mayor. This city belongs to the people of Skopje. The people of Skopje decide for Skopje. The citizens of Skopje should decide on the merits on the basis of what will be offered to them as a concept, and not as wishes.