PHOTO + VIDEO | These are the latest Guinness World Records: Teenager with the largest feet, dog with the longest ears… 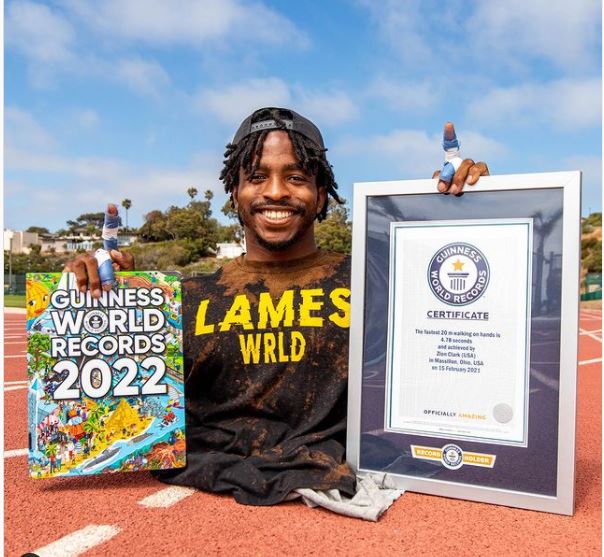 A woman who can skip her hair, the fastest dog and a cat on a scooter are just some of the many new records in the Guinness Book of World Records.

The new records for the upcoming year were announced on Friday, and the recorders have been found all over the world.

Zion Clark, 23, of Ohio, set a new record after crossing the 20-meter dash in 4,78 seconds with both hands. Born with Kadl-regression syndrome, which means he was born without legs. He became acquainted with wrestling in primary school. Clark hopes to become the first American to compete in both the 2024 Olympics, the Paralympics as a wheelchair racer and the "regular" Olympics as a wrestler.

Pratik Mojite from India is another record holder who is the epitome of perseverance, he became the shortest male bodybuilder, he is only 102 centimeters tall. Mojite started training after realizing that doing sports would be strong and fit, wanting to participate even when others considered him weak.

Another record holder is Ivory Coast's Letisha Keway, 25, who holds the record for most jumps over her own hair in 30 seconds. She managed to skip her natural hair 60 times, which she upgraded to make a rope. Letisha is also known for making sculptures out of her own hair, drawing inspiration from African culture. By the way, Letisha is both a model and an actress.

The Canadian duo, the dog and the cat Lollipop and Sashimi, entered the record history by becoming the fastest duo of dog and cat who ran five meters on a scooter in 4,37 seconds. Owner Melissa Mile said that the animals separately enjoyed a solo scooter ride, but that one day they came up with a trick themselves by getting on a vehicle.

Paige Olsen has a dog Lou with the longest ears, 34 cm, while Morgan Parsley, as a teenager, has the largest feet of 30,9 cm.

The tallest competitor among male bodybuilders is Oliver Richter, who is 218,3 cm tall.

Joke of the day: Politics

London mayor under pressure: Citizens want fireworks this year too

London again this year without fireworks

The new Superman is bisexual

Joke of the day: Climb