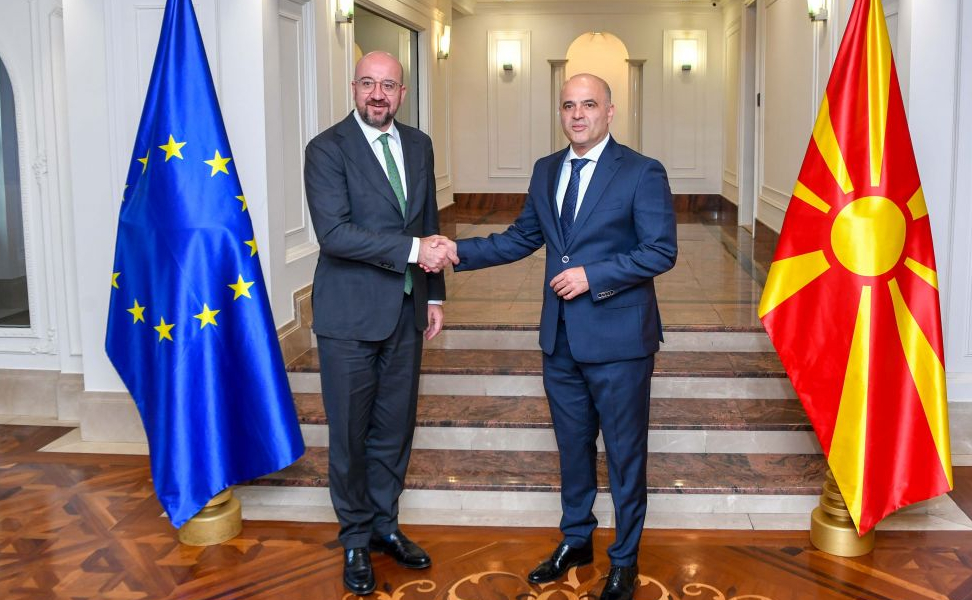 Meeting of Charles Michel and Dimitar Kovacevski in Skopje / July 5, 2022 / Photo: Government of the Republic of North Macedonia

The European proposal for starting negotiations for North Macedonia includes all Macedonian positions and remarks and that negotiations can start immediately after its approval. The proposal envisages a pure Macedonian language, equal to the other languages ​​of the EU member states, the Prime Minister emphasized at today's meeting Dimitar Kovacevski and the President of the European Council Charles Michel.

As the government press service informs, at the meeting the President of the European Council Michel once again emphasized the support and commitment of the European Union for the start of negotiations with North Macedonia, pointing out that these are key moments for the progress of our country from an economic, political and sociological aspect.

Prime Minister Kovacevski emphasized that the support of the European Union in the process of integration of North Macedonia is of particular importance for the state in fulfilling the basic strategic goal, namely full membership in the EU.

Prime Minister Kovacevski emphasized at the meeting that in the past days the proposal from the French presidency was discussed at consultative meetings with the leaders of the government coalition, with the diplomatic corps, the civil sector, with representatives of the expert public and the media, as well as with the opposition parties.

As part of the visit, the President of the European Council, Michel, will attend today's government session, and then he and Prime Minister Kovacevski will hold a joint press conference for the media.