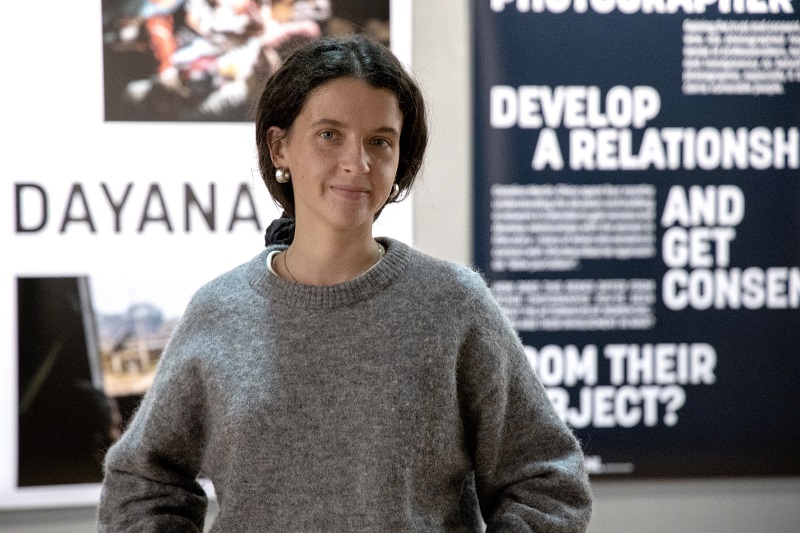 Marika Tsukrovski is the curator of the exhibition that is presented in "Mala stanisa" in Skopje / Photo: Jani Patce

On the occasion of the International Day for the Elimination of Violence against Women - November 25, the World Press Photo Foundation and the Kingdom of the Netherlands present a selection of photos in the "Mala Station" exhibition with the exhibition "Resilience - stories of women who inspire change".

Gender equality and justice are basic human rights of crucial importance to support the cohesion of a society. However, women around the world face deep-rooted inequality and are still underrepresented in the political and economic spheres. Violence against women is emerging as a serious global problem for their health and safety. On average, one in three women will experience physical or sexual abuse in their lifetime.

The group exhibition "Resilience - Stories of Women Inspiring Change" affirms the Netherlands' commitment to women's rights and gender equality and justice. Multiple Voices, documented by 17 photographers of 13 different nationalities, offers insight into issues such as sexism, gender-based violence, reproductive rights and access to equal opportunities. A selection of stories explores how women's and gender issues in the 21st century have evolved and how photojournalism has changed the ways in which they are portrayed.

- Under the auspices of "World Press Photo" we have an annual traveling exhibition with which we present the winners of the annual competition, but we also have exhibitions on a specific theme, which is assigned by our team. This year the exhibition brings stories of women who inspire change. The project is based on research in the World Press Photo archive. The realization of the exhibition is in the style of posters, to make it easier to transfer and travel. The exhibition travels around the world. We were in Brazil, then in Turkey, and now we are in Skopje. Considering the different spaces in which we place it, it looks different everywhere, but the messages it carries are the same - explained Marika Tsukrovski for "Kulturen Pechat".

An exhibition of "World Press Photo" is being held in Skopje after a break of ten years. The exhibition is organized by the Macedonian Center for Photography in partnership with the National Gallery, and is financially supported by the Embassy of the Kingdom of the Netherlands. The exhibition will be displayed in the Multimedia Center "Mala Stanista" from November 25 to December 11.

Within the framework of the exhibition, curator Marika Tsukrovski will hold a lecture at the Cinematheque of North Macedonia on November 26. The lecture is intended for all photography lovers, and admission is free. Also, from November 21 to December 7, the Macedonian Center for Photography organizes a photo workshop for documentary photography on the topic of "Human Rights" in which 11 photography students participate.

Since then, the mission of World Press Photo has expanded. The competitions have grown into one of the world's most prestigious competitions, rewarding the best in photojournalism and documentary photography. Through its successful global exhibition program, the foundation presents important stories to millions of people. The World Press Photo Foundation is a creative, independent, non-profit organization based in Amsterdam, the Netherlands.