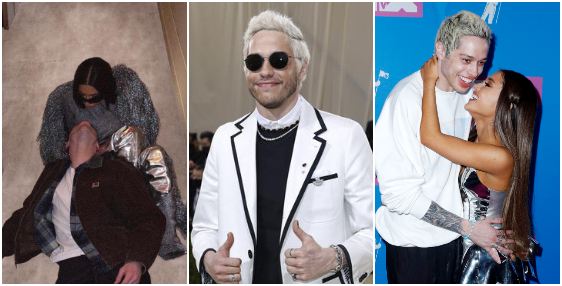 Pete Davidson has had fun with a number of famous women over the years, including Ariana Grande, Kaya Gerber, Margaret Qualli, Kate Beckinsale and she was certainly the last in the line of famous girls Kim Kardashian.

To many, Pete is so mediocre that he wonders what makes all these attractive women fall in love with him? Answer offers Amber Kelleher Andrews - connection expert for DailyMail.

His sense of humor

Since Pete is a comedian, he undoubtedly knows how to write funny jokes, which he presents every Saturday night on the show "SNL". And Amber believes his sense of humor is instantly attractive.

In a survey of 730 participants between the ages of 18 and 39, the International Journal of Medical Sciences found that laughter can make a person healthier. "Laughter is also associated with higher intelligence, it increases the perception of self-confidence, competence and status," she said.

"No wonder Patt Davidson is attracted to Hollywood ladies!" "Simply put, Pete laughs at them, which lowers their levels of stress hormones like cortisol and adrenaline, while increasing their endorphins and dopamine."

In previous years, Pete has been quite open about his mental health issues. In 2017, he revealed that he has borderline personality disorder, and Amber believes that this vulnerability, which he does not hide, can attract people.

"Pete is a comedian, but that is not the only reason. Many famous comedians are not so attractive because they are not pleasant company. Pete carries the heart in his palm. He was very open and honest about his difficult past, and openness attracts women. "Women want to help him, to protect him."

Pete has been working on the "Saturday Night Live" show since 2014, and over the years he has made many famous friends. According to Amber, this is very important for Hollywood ladies.

"Hollywood and SNL are synonymous, from icons like Mike Myers, Steve Martin and Eddie Murphy to megastars like Will Ferris, Chris Rock and Adam Sandler." SNL comedians are brands, they are considered the golden boys of Hollywood. "Pete Davidson has been part of that team for years and is a magnet for women."

Pete is over 190 centimeters tall, and Amber thinks that makes him attractive to women as well.

"Tall men are generally more attractive to women than shorter men. Research shows that it is written in our DNA that we are attracted to taller men. According to the BBC, taller men are more likely to be elected to better business positions. We also naturally associate financial success with "size" and "dominance". "Pete has that alpha male trait," she said, adding that women were likely to feel safe with him.

She adds that this is not the only physical trait that is a virtue for Pete at the moment. "There is a trend in Hollywood right now for beautiful women to be in a relationship with men who are not classically attractive, or who are skinny, tattooed… Just look at Machine Gun Kelly with Megan Fox, Travis Barker with Courtney Kardashian and now Pete with Kim." says Amber.

For years, Pitt has been dogged by rumors of giftedness. This was further encouraged by his ex-girlfriend Ariana Grande in the music video for the song "Thank U, Next".

Namely, in one scene you could see a notebook in which each page is dedicated to one of her exes. Fans quickly noticed that the word "huge" written in large, bold font could be seen on Pete's page.