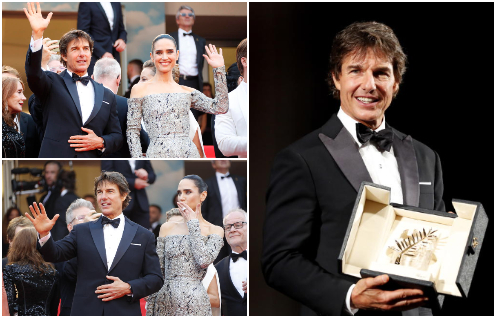 At the Diamond Jubilee of the Cannes Film Festival Tom Cruise was greeted with thunderous applause and standing ovations on Wednesday night when he was awarded the prestigious Palme d'Or.

The long-awaited "Top Gun: Maverick" was shown during the second night of the two-week festival, and Tom Cruise addressed the crowd before being awarded the award:

"Thank you for your time. "I'm making these movies for all of you."

Before receiving the award from the director of the Cannes Film Festival, Thierry Fremo, three-time Golden Globe winner, was delighted on the red carpet while eight fighter jets flew over the hall.

"They all worked so hard to get this on the big screen, and it's a dream to be here. "I will never forget this night." Cruz also praised his Paramount associates.

Tom's standing ovation is a really rare occasion when such an reaction was given to an actor before the first frame of the film was seen.

Tom and his colleague Jennifer Connelly dressed to impress as they arrived for the premiere of their film. The actor highlighted his athletic figure in a classic black tuxedo, while Jennifer, played by Penny Benjamin, looked flawless in a striking silver dress with bare shoulders.

The sequel to Tony Scott's 1986 blockbuster "Top Gun" was hailed by critics alike as "better than the original in every way possible."