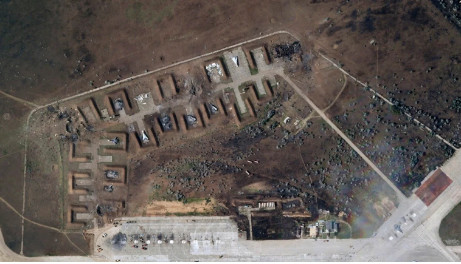 A Russian air base on the Crimean peninsula, which Moscow annexed from Ukraine in 2014, was badly damaged in explosions on August 9, satellite images released last night showed, it says.The Guardian".

The Russian Navy's Saki Air Base near the village of Novofedorivka lost at least nine warplanes, including SU-30SM fighters and SU-24M bombers, it said "Radio Free Europe".

Several buildings in the base that may have contained ammunition were also destroyed.

Russia has been using the Saki air base, located on the western side of Crimea, for regular attacks on Ukrainian territory since it launched its invasion of the country on February 24.

The exact cause of the explosions on August 9 is not known.