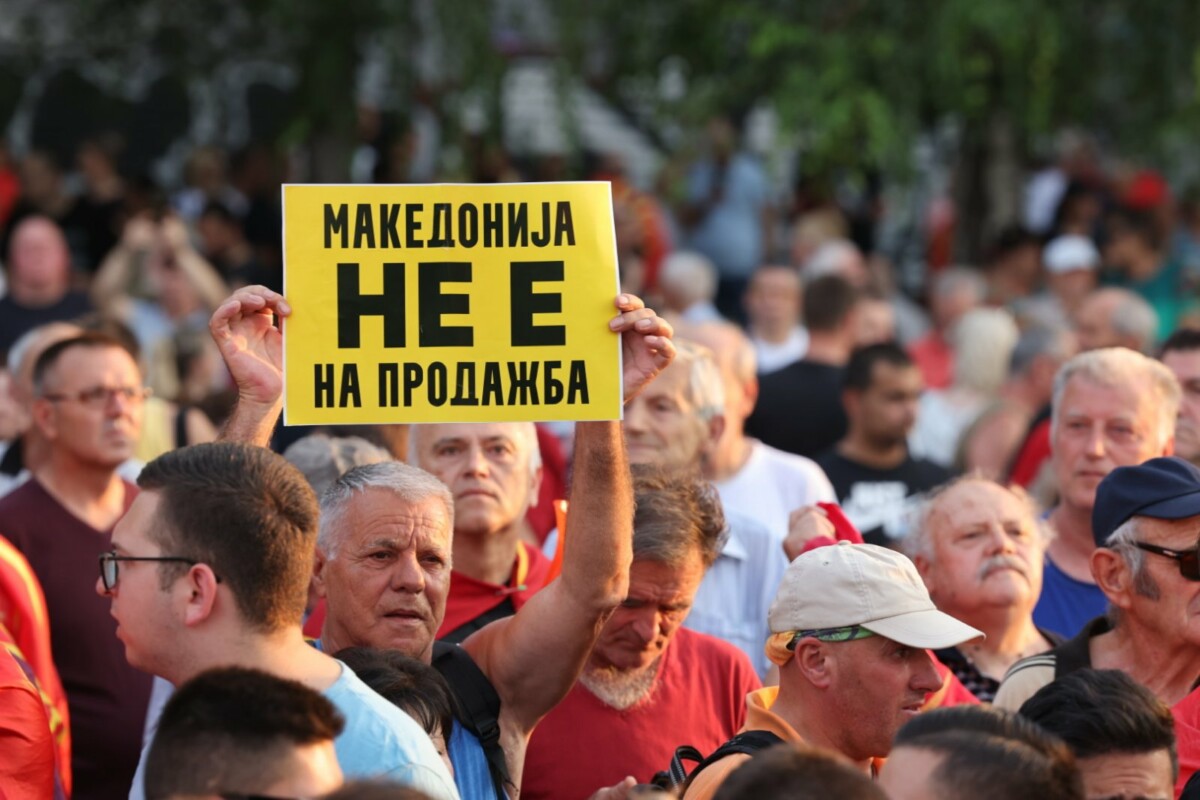 Protest under the motto: "Ultimate, NO Thanks"/Photo: VMRO-DPMNE

And tonight the participants of the protest in front of the government united under the motto: "Ultimatum, NO Thanks" send messages against the French proposal and appeals not to sign it. The national anthem is sung, and patriotic songs are played over the loudspeaker.

We young people have always been the bearers of change in Macedonia, we are the ones who will carry the flag of freedom because this sacred piece of land is our home, our homeland, our legacy and our last fortress for which we have to fight, he said. student Mladen Janevski at today's protest entitled "Ultimatum, NO thanks".

Janevski added that we need to make our Macedonia a better place to live.

He added that we young people will absolutely never be pale observers of the destruction of Macedonia, and that should be clear to all who work hard to destroy this nation.

"Throughout history, Macedonians have fought a lot. They fought to raise their voices, to say that we exist and that here is a nation that is pure and not destroyed by any army. The destruction and assimilation of the Macedonian people will not pass this time. We Macedonians have lost battles, but we have never lost wars", Janevski said.

Janevski pointed out that this is exactly why today they will receive another big NO, because neither you nor I nor our ancestors fought for a humiliated, destroyed, belittled Macedonia. This is a sacred piece of land.

Journalist Darko Janevski emphasized that the government is manipulating the people while at the same time negotiating about language and identity.

- Today we listened to Kovacevski with the same lie, and if you remember, they told the same lie when they signed the Prespa Agreement and shouted that the Macedonian language and identity were concrete and today they are arguing about that concrete. At the same time, they lied to us that we must implement the agreement signed by Zaev and Borisov, and the key point in it is the Macedonian language, Janevski said.

He pointed out that the second lie they are trying to spread is that they threw history out of the negotiation framework with the EU, and that is again a lie because there is a commission that negotiates about it and they have already negotiated Tsar Samoil, Cyril and Methodius, and now they are left with Gotse, Dame and all the heroes of the hymn, a stanza that they avoid so that later they will find out that they have sinned.

- They said that our identity is concrete, and they first turned that identity into three slashes, and they consider us slashes, not Macedonians, and Macron called us North Macedonians. If it is not what they claim, then what are they negotiating for? Is it about the road to Sofia? No, but they are negotiating as if to deceive us so that we do not see that they are canceling us. This country is falling apart with them step by step, said Janevski.