PHOTO | Bees and honey to be protected by law, citizens to learn how to recognize real honey 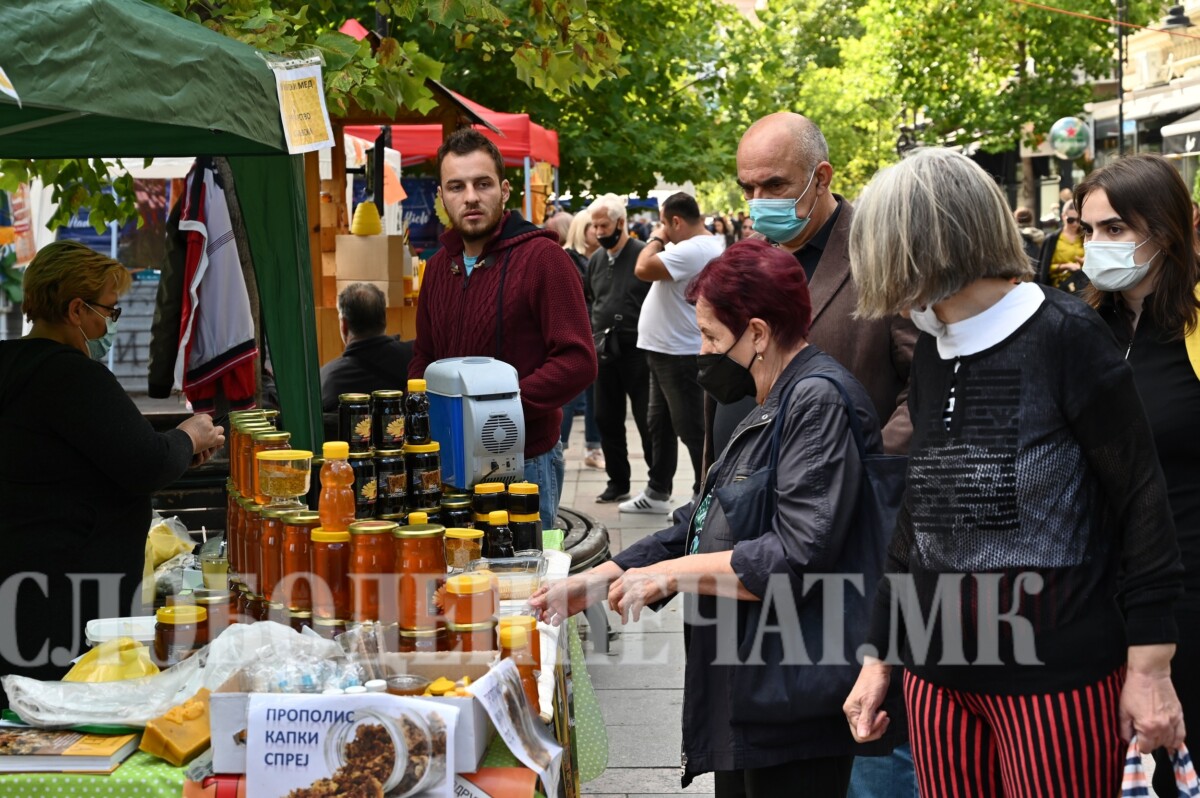 Honey in the country is consumed more as a medicine, not as food. We consume less than one kilogram per capita, unlike Slovenia which consumes nine or Japan which consumes 16 kilograms per capita. Let's change the attitude and accept honey as an important product in the diet. To educate ourselves more and to learn how to recognize real, quality honey, and for the state to protect it by law.

This is the message from this year's 17th manifestation Days of Macedonian Honey that was opened today, and will last until September 26. At the stands set up along Makedonija Street in the center of Skopje, visitors have the opportunity to taste and buy different types of honey, pollen, wax and other products from our Macedonian beekeepers.

- We demand that tobacco, grapes and other agricultural products and bees and honey be legally protected and guaranteed. It is generally known what foreign media write about our natural conditions, which are extremely inclined to produce quality honey. We can be proud of that, but we should also preserve it, said the president of the beekeeping association "Matica", Venche Bilbilovski.

He pointed out that today, unfortunately, honey is mixed, which is mixed with various syrups to make a profit. This destroys its natural properties, and in humans there are anomalies and various diseases.

- It is up to us, the beekeepers, to restore the trust of the consumers, and we can do that only with education and with the support of the competent institutions. Our most important goal is through direct contacts, to educate the citizens how to recognize real honey in the influx of counterfeits, but we also want to point out the importance of honey in the daily diet, underlined Bilbilovski.

The Minister of Agriculture, Forestry and Water Economy, Arjanit Hoxha, who officially opened the event, said that having his own Macedonian honey, and at the same time an indigenous Macedonian bee, is a reason for pride, additionally, if we know that our honey of all world Manifestations, fairs and competitions receive the highest awards, as a confirmation of its quality.

Hoxha stressed that the Ministry of Agriculture, Forestry and Water Economy (MAFWE) strongly supports the development of beekeeping, and another opportunity for development of this branch is the IPARD 2 program through which 46 agreements were concluded with a total financial support of about 120 euros.

Recently, the minister added, beekeeping subsidies in the amount of 3,2m euros were paid.

According to him, the Financial Support Program includes several sub-measures for subsidizing the honey plant phacelia, with and without certified seed material. The subsidy for a bee family has been increased from 600 to 800 denars.

- For greater support, we enabled beekeepers with five bee families to register and apply for subsidies. We provided a subsidy of 1.000 denars per bee family that is under control and is included in the selection for production of bee queens, and in order to stimulate organic honey production, we provided an additional payment of 50 percent. With the measure for a rural woman and a young farmer, we provided another additional stimulus for the development of beekeeping. According to the information so far from the Paying Agency, the interest is great, especially among young farmers. Women farmers, on the other hand, can sell honey and bee products legally through the Household Sales Regulations, which is also another motive to choose beekeeping as an important livestock branch with great potential, Hoxha said.

At the event, it was once again emphasized that honey is the healthiest food and the best natural remedy.

- Honey never spoils and is extremely rich in minerals, vitamins and antioxidants, which is why it is included in the superfood and super medicine, say the producers - exhibitors.

The days of Macedonian honey are organized by the beekeeping association "Matica", with financial support from MAFWE. Visitors have the opportunity to taste and buy different types of honey and other bee products from our Macedonian beekeepers, but also to get, if they want, tips on how to recognize quality, real honey.

This year, due to the covid-pandemic, there were no children from kindergartens at the opening whose performance has been a tradition, but, as Bilbilovski informed, members of "Matica" in recent days visited several schools and educated first graders about the importance of honey and its consumption.

This year's Macedonian Honey Days also have a humanitarian character - they provided honey and other bee products for children with disabilities.

There is electricity for the companies, but who can pay for it will survive

MFA: The new protocol with the EU with new benefits for businesses to enter European markets

VIDEO | The Plan for accelerated economic growth 2021-2026 was presented

Bekteshi: There is no need for a crisis in energy, the price of electricity remains the same until the end of the year