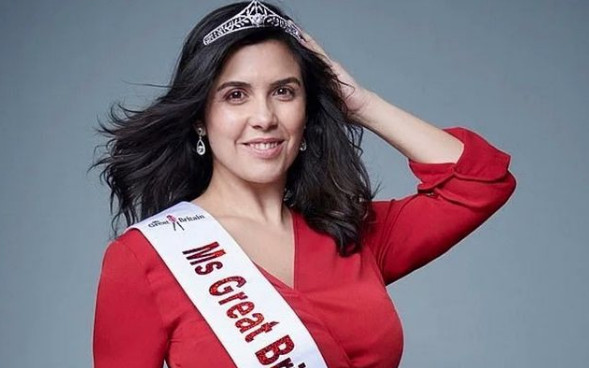 This year's Miss Great Britain contestant intends to appear before the jury completely without make-up in order to encourage young women whose self-confidence is shaken in the age of filters, and whose beauty ideals border on the unattainable.

The finalist of the contest for the most beautiful British woman, 31-year-old El Celine, had unpleasant experiences during her childhood due to her curly hair and hair, writes Independent .

She grew up on the Greek island of Skiathos before moving to Wiltshire to attend Worminster School.

She now lives in Surrey, and in a statement to BBC - Celine said that she was ridiculed for her body shape, and that her peers teased her that she had lice and called her a gorilla because she has a little more hair on her face and hands than others.

She started applying make-up at the age of 13, and at the same time straightening her naturally curly hair.

In addition to working in healthcare, Elle is involved in singing and writing lyrics. She noted that year after year, filters on popular apps like Instagram and TickTock do the same thing she was forced to do at school.

Earlier in 2020, Sari applied for Miss Britain in the 27- to 38-year-old category, but she said she felt she had given the judges what she thought they wanted to see.

However, during the coronavirus quarantine, the pressure to wear make-up on a daily basis decreased and Elle learned to accept herself as she is.

Back in June, she said she made the decision to become the first finalist for the Miss Britain pageant, which competes without a bit of makeup to support and promote realistic standards of beauty and a positive view of all body shapes.

Although she made the decision very nervous about how people would accept it, she decided to publish it then so that she would have the courage to persevere in her intention.

"Today's beauty pageants are less about looks and more about 'who you are and what you bring to the table,'" Elle said, adding that she would feel really good, regardless of the competition.

#recommended
Сподели
Video of the day

Alec Baldwin announced for the first time after the tragedy: My heart is broken

Slavcho Poposki predicts: Morning temperatures drop to minus three, here it is!

PHOTO | The last announcement of the shot cameraman "breaks" the heart

PHOTO GALLERY | Actors who died during filming: Mercury burned in a car, shot with a bullet, run over by a train…