PHOTO | Critic mother: I cover my baby with tattoos, am I a bad mother because of that? 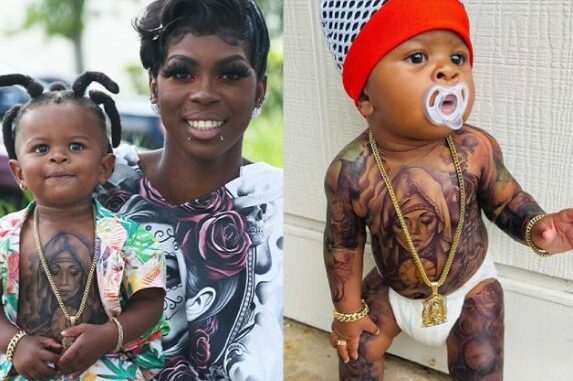 A mother obsessed with tattoos covers her son's body with tattoos. Only his are temporary. "People accuse her of raising a criminal and 'preparing' him for prison."The Sun “.

Shamekia Morris from West Palm Beach, Florida, USA, first started putting temporary tattoos on her son Traylin when he was just six months old. But people accuse her of breeding "gangsters" and "bullies".

The proud mother often shares photos of her child on social media under the name "NuggetWorld561", which show that she has tattoos all over her body.

"I get a lot of negative reactions, people say my son will become a 'gangster' or a 'bully'. "I don't think they are used to seeing a baby with tattoos."

"When I was eight months pregnant, I took pictures with my brothers in the tattoo studio," she added. "People on social media harassed me because of that. All the comments were negative, people said that my baby would be born with a bunch of tattoos. That the poison from the tattoo will affect him badly. "It was crazy," she told Britain's The Sun.

After the birth of his son Trey, he is often the target of "trolls" who write comments such as: "They will kill him on the street" or that he raises him and prepares him for prison.

"People's reactions are horrible and it's horrible to me because I know I'm not a bad mother and they call me all kinds of ugly names. "It's crazy," Shamekia said.

However, she says she "does not care" because it is a "way of life" that she enjoys.

"Judging someone based on a 30-second video on social media is up to you, but what you say or think about someone will not determine what they will be in the future," Morris added.

Shamekia, who has more than 319.000 followers on the social network "TickTock", insists that Trajlin "wants" temporary ink. It also has its own wardrobe that is filled with combinations of clothes for small children, as well as over 150 pairs of sneakers.

"A good mother is the one who is here for her children, who is their admirer and the person they come to with their problems," she concludes.

Aphrodisiacs: From ancient love potions to the food industry

Tips and recommendations with Viktor беubeski, personal trainer: How to get a fit figure before the holiday?

What are the best cities to live in the world for 2022?

Children from poor families in France have been transferred to elite schools: Here are the results

A mother assured her son that they would find John Sina if they fled Ukraine, he found them

Conversation with psychologist Ivan Hristov: How to talk to your child about sex and love relationships