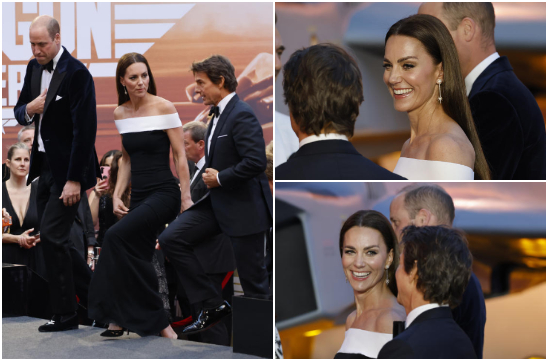 Kate Middleton и Prince William The British premiere of "Top Gun: Maverick" took place at Leicester Square in London on Thursday night with the star of the film. Tom Cruise. On the red carpet, Kate wore a black Roland Mouret gown with a white neckline to the shoulders with her distinctive loose hair, but hidden behind her ears, to accentuate the earrings.

Meanwhile, Prince William paraded in a classic black tuxedo and bow, but the theme of the night was his shoes. He wore Crockett & Jones moccasins exported by F18 aircraft.

William, who was himself a Royal Air Force helicopter pilot, and Kate were introduced to other cast members, such as Jennifer Connelly played by Miles Teller.

At one point in the night, Cruz reached out to Kate as she climbed the stairs.

The London premiere will not be the first time Prince William, 39, and Kate, 40, have seen the long-awaited film. The Duke and Duchess of Cambridge were reportedly honored at a special screening of a sequel to Cruz's invitation, who heard that William was a fan of the original 1986 film.

"We have a lot in common," Prince Cruz said at the premiere, according to "My London". "We both love England and we are both aviators, we both love to fly."