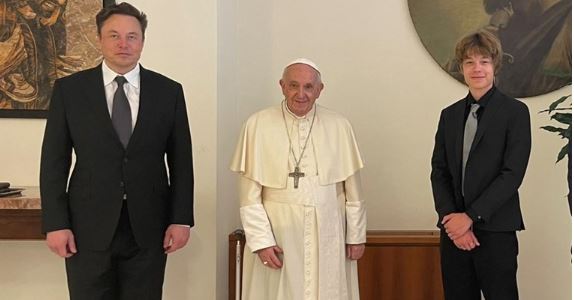 The billionaire Ilon Mask, co-owner of the American electric car maker Tesla, posted a photo with Pope Francis, including his four sons. Musk wrote that he was honored to meet with the Pope on Friday.

Ватикан he did not announce the event, he did not give any information about what the billionaire and the pope discussed.

The CEO of Tesla и SpaceX he was not on the official visitor list, so perhaps he met with the head of the Catholic Church in a more "private" arrangement. According to Italian media, they discussed technology and how it could help people in the future.

Musk posted a photo of the meeting in the early hours of Saturday morning after not posting a single tweet for a week and a half. The meeting was held in the home of St. March where the Pope lives. At the meeting, Musk was in the company of his four sons Griffin, Kai, Damian и Saxon, which he got in marriage with his ex-wife Justin Musk.

It is common for Pope Francis, when he meets with corporate CEOs, to appeal to them to use wealth and technology to help the poorest.

Twitter's board of directors on June 21 recommended that shareholders accept Musk's offer, although Twitter shares remain below his offer price, raising doubts that the sale will actually happen.

PHOTO | "Elon Musk has a new girlfriend": Who is the 23-year-old actress who won his heart?

What is the sunniest city in Europe?

What is he doing today: Philip Makraduli, international model