PHOTO: Bulgarians boasted that they cleaned the Gotse monument in Skopje and put a Bulgarian flag on it 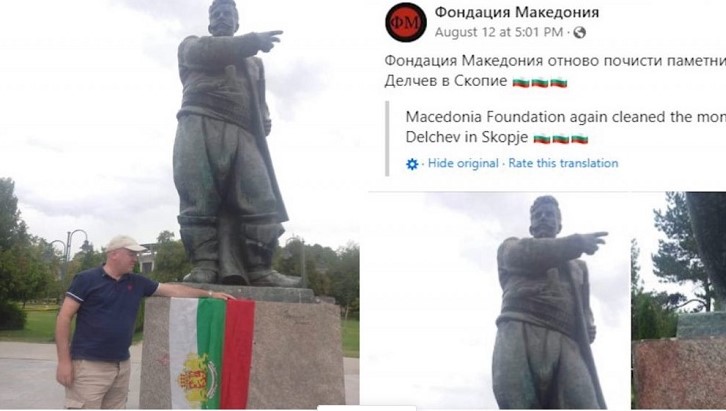 Members of the Bulgarian foundation "Macedonia" placed a Bulgarian flag on the monument of Gotse Delchev in the City Park in Skopje, the foundation announced on social networks.

The members of the foundation, placing the Bulgarian flag, also boasted that they had cleaned the monument.

He is the first person of this organization Viktor Stojanov, who in his last video address on Facebook boasted that they already had more than 100 activists, and called for others to join.

The foundation is known in the Macedonian public for moves that were interpreted as provocations. Last year in October, for example, she distributed copies of the book "Great Bulgarian Reader" by Kuzman Shapkarev in mailboxes in Skopje.

He also announced that "people who will spread their cause" will arrive in Macedonia these days.

Hidden behind his colleagues from Praven, the accused professor Dragi Rashkovski appeared